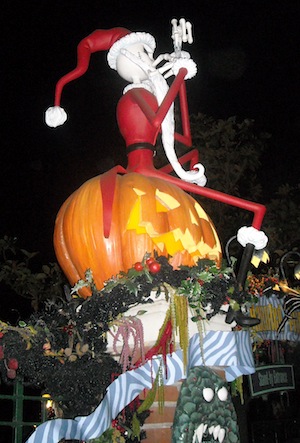 When I visited Disneyland this past November, I was excited that I’d able to experience the ride “overlays” of The Haunted Mansion and it’s a small world. A tiny part of me was somewhat skeptical however. Would the overlays be silly or poorly executed? I had to experience it for myself.

Think of a ride overlay like a slipcover for a couch. The couch underneath may be in perfect condition and is perhaps your favorite seat in the house. Let’s say, for the holidays, you wanted shake things up a little and give your living room a different look. You may throw a bright red slipcover over your comfy couch. That may be what the Imagineers were thinking when they created Haunted Mansion Holiday and it’s a small world holiday.

I jumped into my rental car and started the 37 mile, one and a half-hour drive from Los Angeles to Anaheim. On this cool California Saturday evening, the park was open until midnight. I arrived as the sun was setting and jumped on the Disneyland Railroad to New Orleans Square and made a beeline to the Haunted Mansion Holiday. 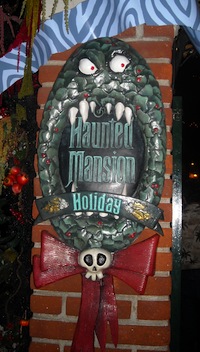 Upon walking up to Haunted Mansion Holiday, one sees that Jack Skellington from “The Nightmare Before Christmas” has taken over the decorating for the season. It appears as a strange mix of Halloween and Christmas with pumpkins and Jack himself in a white beard and “Sandy Claws” hat and suit. While the exterior appeared to be in full “Nightmare” mode, the fun had only just begun. While I won’t go into complete detail here, I will say this is indeed a full overlay. I cannot think of an instance or scene that is untouched. For example, within the stretching room, innocent Christmas portraits on the wall are stretched to reveal such horrors as a man-eating wreath and sinister toys. The ballroom is decorated for a Christmas ball where the waltzers eerily dance right through large but dead Christmas tree. When you enter the graveyard, it is now winter and a snowfall covers the ground. Most definitely, the soundtrack is altered with a new narration and Christmas carols intermixed with Grim Grinning Ghosts. Hitchhiking ghosts are replaced with Nightmarish gifts. Finally Sally, Jack’s friend from the movie, stands in place of the Little Leota reminding you to “Hurry Back.”

I loved Haunted Mansion Holiday. For me, it is combination of two things that I already really enjoy. The combination works well.

Despite it’s a small world being a less elaborate ride in general, its transformation is no less spectacular. Just as with the Mansion, the small world’s exterior differs from that of Orlando. The white and gold cityscape and familiar clock face along with the queue area are completely outdoors. For the holiday version, the buildings are outlined in multi-colored Christmas lights.

At first, I had difficulty getting on the ride. When I was in Disneyland in September, Small World was a walk-on. In November, the wait for Small World was 20 minutes. In fact, the queue actually travels across the street and winds around before making its way back to the ride. The street is used for parades so the ride is closed during parades. I was shut out for about an hour. 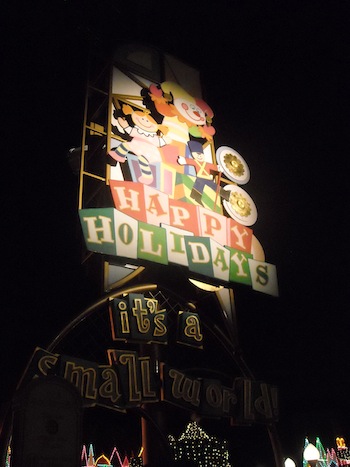 When I finally got in line, I learned that every 15 minutes, something very cool occurs. Usually, the clock opens up and some figures travel around the bottom, cuckoo clock style. During Holiday, all the lights go dark. They then project amazingly sharp cartoon images of the holidays onto the small world cityscape complete with the Nutcracker soundtrack. On the final beat of the music, the multicolored Christmas lights return and all is quiet except the sound of the clock’s tick-tock.

As with Mansion, not a single scene has been left untouched. The boat ride includes a trip to the North Pole. Even the newly placed Disney characters get into the holiday act. The soundtrack completes the mood. Of course, the small world music remains, but “Jingle Bells” and “Deck the Halls” have been so expertly interweaved that in no way does it sound out of place or shoved in. Some scenes are most definitely Christmas. Others are a more generic winter season or New Years.

It’s a small world holiday, too, was a fun change for the season. Anyone who has ever been to a Disney park during the holidays knows what a beautiful job they do. The holiday ride transformations complement the mood and décor of the park. The beauty of the overlays is that you always get your favorite rides back in January.