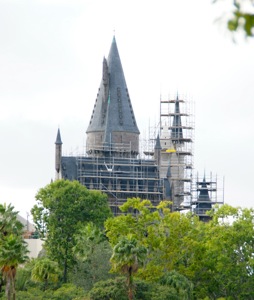 The new “Harry Potter and the Half-Blood Prince” Blu-ray and two-disc special edition DVD (Avialable tomorrow, Dec, 8, 2009) will take you behind-the-scenes for an exclusive look at The Wizarding World of Harry Potter. The magical land based on the popular Harry Potter books and films will open at Universal Orlando Resort in Spring 2010.

The Blu-ray and DVD set include a special 11-minute video that reveals more about the The Wizarding World of Harry Potter than has been announced to-date. The sneak peek featurette includes interviews shot on location with stars Daniel Radcliffe, Emma Watson, Rupert Grint and more – with each sharing new details and their excitement about The Wizarding World of Harry Potter.

Never-before-seen footage includes:
• Glimpses into the ride experiences of Flight of the Hippogriff, Dragon Challenge and Harry Potter and the Forbidden Journey.
• A first-look at some of the delectable foods and drinks, including Cauldron Cakes, treacle fudge and Butterbeer.
• Universal Orlando Creative team members meeting with J.K. Rowling and the filmmakers.

Universal has provided a preview of the video included with the movie.

Be sure to get your copy of the Winter 2010 issue of “Orlando Attractions Magazine” for a full feature story on the Wizarding World.