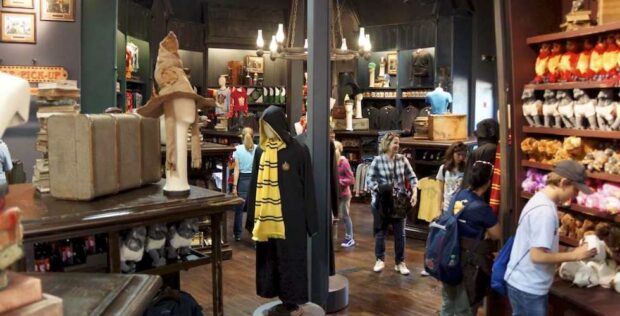 Universal Orlando team members were able to see some top secret magical items today – some new merchandise and foods and beverages that will be sold in The Wizarding World of Harry Potter: Diagon Alley when it opens this summer.

While we weren’t able to attend and team members weren’t allowed to take photos, we were able to find out some of the things they saw. Here’s what we gathered from a first-hand report.

• Complete costumes of Bellatrix Lestrange, Lucius Malfoy and others.

• Various styles of baseball caps with the words “Wizard” “Witch” and “Muggle” on the fronts.

• A full line of Quidditch and “house” apparel. This included sweat shorts/pants, robes, jackets and shirts, themed after all four houses.

• Many accessories themed to the four houses. Some of these include wallets, coin pouches, mugs/cups, and iphone/tablet cases and covers.

• Furry hats possibly designed after the uniforms worn by the students of the Durmstrang Institute from the films.

• Various styles and sizes of quill pens and stationary that will be available at Scribbulus.

An entire section of the showcase was devoted to refreshments. Many new dishes will be offered at the Leaky Cauldron restaurant. Some of these include Fish & Chips, Fisherman’s Pie, Cottage Pie and a large assortment of breakfast items.

Another highlight of the refreshment display was the new beverage offerings. A new mint flavored bubble tea will be offered plus eight original alcoholic beers will be on tap. The expansion will also feature an indoor Butterbeer cart.

Some other previously announced items and shops are:

• Madam Malkin’s Robes for All Occasions, offering a variety of wizardwear from Hogwarts school uniform ties, scarves and jumpers, to authentic wizard’s robes and character costumes.

• Magical Menagerie, features a collection of plush animals, such as owls and Hippogriffs.

No opening date has been set for Diagon Alley this summer but all signs point to mid-June. For more of what you’ll find in the new area, see our story here.

Mix it up for summer with cocktail...

Fast & Furious Experience this weekend at...