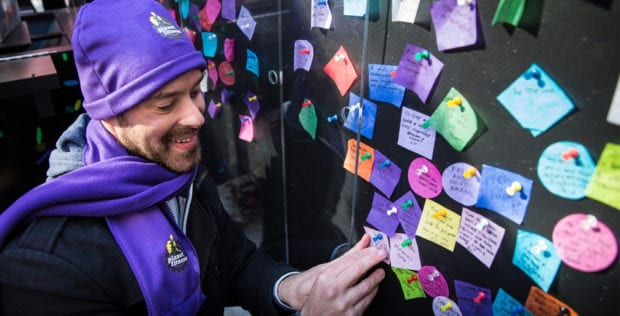 Times Square Alliance and Countdown Entertainment, co-organizers of Times Square New Year’s Eve, along with presenting sponsor, Planet Fitness, unveiled the New Year’s Eve Wishing Wall on Nov. 30, 2018. The attraction offers visitors from around the corner and the world the opportunity to be a part of New Year’s Eve in Times Square by writing their wishes for the upcoming year on the actual confetti that will be released at midnight on New Year’s Eve.

The Wishing Wall will be located in New York City at Times Square’s Broadway plaza between 46th and 47th Streets, every day until December 29 from 11 a.m. – 8 p.m. (not available on Christmas Day, December 25). For those who want to be included in the celebration but are unable to visit the Wishing Wall in Times Square, wishes can also be shared online at the Times Square New Year’s Eve Virtual Wishing Wall (TimesSquareNYC.org) or on Twitter and Instagram using #ConfettiWish. Additionally, as the presenting sponsor of the celebration, Planet Fitness will collect wishes at PlanetFitness.com/confettiwishes.

Each wish collected before December 29th – via the Wishing Wall in Times Square or submitted online – will be printed on a piece of confetti and become part of the 3,000 pounds of confetti released at midnight over the one million revelers celebrating in Times Square on New Year’s Eve.

“The New Year represents a “refresh” – a time for all of us to wish for a better future, as individuals and as one world,” said Tim Tompkins, President of the Times Square Alliance. “The Wishing Wall provides people from every corner of the globe an opportunity to participate in a beloved Times Square New Year’s Eve tradition and take part in our global celebration.”

“Writing your wish on a piece of confetti is one of the most unique and wonderful ways to be part of the Times Square New Year’s Eve celebration,” said Jeffrey Straus, President of Countdown Entertainment. “As the clock strikes midnight and confetti floats down onto the million revelers below, you will be able to catch someone’s wish, making for a truly magical moment.”

“Each New Year brings with it unique opportunities for self-reflection, collective celebration and a chance to look ahead to the wonderful moments that await us all next year,” said Chris Rondeau, Chief Executive Officer at Planet Fitness. “Whatever your personal goals, triumphs and successes might be or become, our wish is for everyone to enjoy a fun, positive and judgement free 2019.”

For more information about Times Square New Year’s Eve, visit TimesSquareNYC.org, and watch these videos for other New Year’s celebrations at attractions around the world:

A new musical adventure with Winnie the Pooh...

Combining New Year’s celebrations of Disney’s past and...