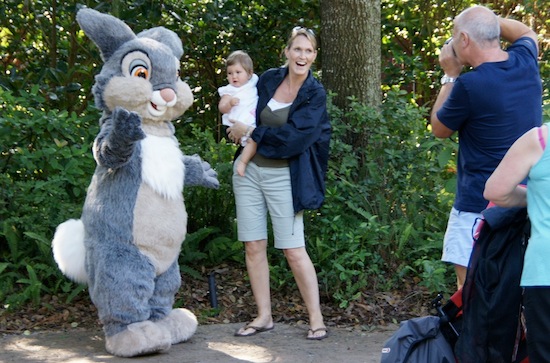 Disney World’s next Limited Time Magic event starts on Monday, Earth Day, at Disney’s Animal Kingdom and runs through April 28. There will be parties, special merchandise and some returning characters.

Disney Character Dance Party
Some rarely seen Disney Characters will be making cameo appearances in Mickey’s Jammin’ Jungle Parade. Look for Lilo and Stitch, Flik and Princess Atta from A Bugs Life, Koda and Kenai from Brother Bear, and Thumper and Miss Bunny from Bambi as they march along, and then join them for a dance party hosted by DJ Dino-Mite in Dinoland, USA.

Can’t make it to Florida for the occasion? Take advantage of a special opportunity to order an exclusive 15th Anniversary T-shirt online from April 22 to April 24, 2013 at DisneyParks.com/Store

“Dig Up” Something Delicious
The Earth Week celebration continues all across Walt Disney World Resort, where for a limited time, you can “dig in” to a duo of playful desserts.

Head into Disney’s Hollywood Studios or Kona Café at Disney’s Polynesian Resort and try out the “Worm and Dirt Cupcake.” Or, travel to Magic Kingdom or Epcot for a delightfully delicious “Worm and Dirt Tart.”

There will also be some special Earth Day activities at other Disney World locations such as Downtown Disney.

PARKsaver: Check out these hotel, ticket and package savings for spring

Photo Finds: Tour of props for A Pirate’s Adventure – Treasure of the Seven Seas – April 22, 2013

New details on 2019 holiday celebrations at...