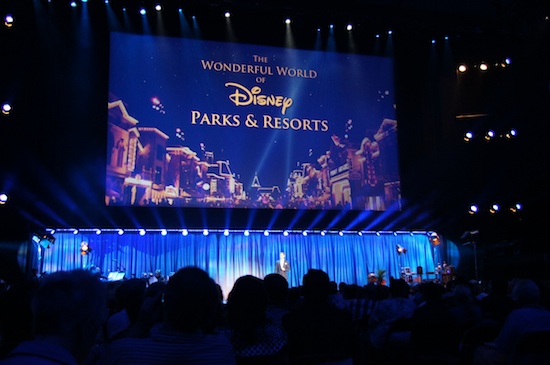 Disney’s second D23 Expo has ended and we have a many photos and videos to share over the next week or so. Although the event was a lot of fun, as the first one was, many Walt Disney World fans were disappointed with the lack of new announcements.

We Live Blogged the Disney Parks and Resorts presentation on Friday, but none of the Disney World rumors we posted about came true.

During the presentation, Disney gave updates on the Fantasyland expansion, but much of it was already known. They talked about the interactive queue for The Little Mermaid ride and Scuttle’s Scavenger Hunt. They also talked about the small “life-size” animatronic of Lumiere in the Beauty and the Beast section of Fantasyland and the swinging ride vehicles in the Seven Dwarfs Mine Train coaster. They showed a new video of a computer graphics ride-through and a video of the Imagineers testing the vehicle (below).

Upon hearing about the disappointment from the lack of announcements, Walt Disney Parks and Resorts Chairman Tom Staggs responded on the Disney Parks Blog, letting everyone know that the timing just wasn’t right, but new things are coming, including their plans for Downtown Disney. Here’s part of his response:

I know many of you were hoping for announcements regarding new projects from Walt Disney Parks and Resorts, especially at Walt Disney World Resort, so I wanted to take a moment to address those comments.
The projects we’ve already announced represent the largest period of growth ever in Disney Parks’ history. We’re working hard to create new and exciting experiences for our guests around the world and while the timing isn’t always right to announce another big project, we like to use opportunities like the D23 Expo to update fans like you on the great progress we’re making. We have several incredible projects currently in the works and look forward to sharing more information with all of you in the weeks and months ahead, including new details regarding Downtown Disney in Florida.

We want the Adventurers Club!! Kungaloosh!!

What actually qualifies as a roller coaster?...