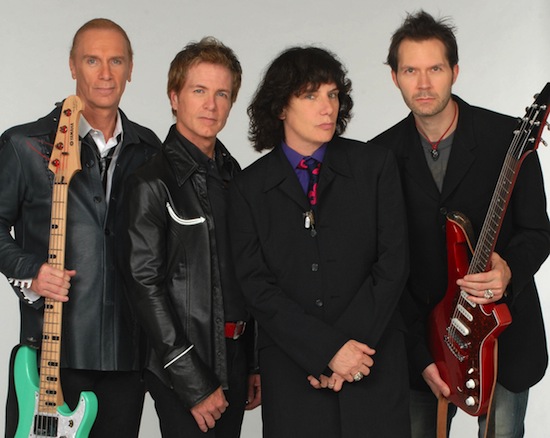 Mention the name Mr. Big, and you might get a response like, “Weren’t they a hair band in the early ’90s”? But, belt out the line “I’m the one who wants to be with you,” and memories of the mega-smash record from 1991 will pop into your head and you’ll know exactly who Mr. Big is.

After a long hiatus, the original members of the band are back together and on a tour of the U.S. for the first time in over a decade. This Saturday, Aug. 27, 2011 the tour stops by the House of Blues at Downtown Disney. We caught up with lead singer Eric Martin to get his take on the reunion, the tour and his fondness of Disney theme parks.

After being away for the last decade, Mr. Big is back together and on the road. How did this reunion come about and how has it been so far?
It’s been a long, long time since we’ve graced the stage together. After we all went our separate ways in 2002, I started to miss playing with the band, so I reached out to Billy Sheehan (original bass player) and wrote him. I told him that every time I do an interview or try to sell a solo album or go on the road and play gigs, everyone wants to know about Mr. Big. All they wanted to hear was Mr. Big music or find out when Mr. Big was getting back together. Billy told me he was in the same boat. So Billy talked to Paul (Gilbert, original lead guitar player), who was playing the House of Blues in Los Angeles and, ironically, Richie Kotzen (who took over lead guitar when Gilbert left the band) was the opening act with Pat Torpey (original drummer) playing drums. It was inevitable that they would all get up on the stage and play together, while I was in the dark taking my kid to school. I didn’t know what was happening. The crowd went bezerk and a lightbulb went off over Paul’s head about getting the band back together. So, we got back together and did a tour in 2009 of Japan, southeast Asia and Europe. It did great. We didn’t have any plans to do an album, but the situation presented itself. We discussed it and said, “yeah man, let’s do an album”. We did it in two weeks. And now here we are, on the road supporting it and the band sounds great.

The new album, What If, sounds like you guys never missed a beat. Some acts though, when they reunite, try to recapture the original sound, but you have adapted and put out a very modern rock album that fits in with the times.
The rock music you hear now has come full circle. They all sound like us (laughs).
I appreciate that. I don’t know how it works. In the beginning when we got back together, I was like “I hope we do an album” and they were like, “Don’t plan on anything Eric.” They wanted to take baby steps and make it spontaneous – and it was spontaneous. We had a small window and wrote all these songs. We got lucky because people have dug it and critics dig it, which is not bad for an old band from the ‘90s.

I can’t interview you without bringing up “the” song, To Be with You. After all of these years, is it still special performing that song every night to your fans?
Ah, our campfire song! I love the song. It’s the gift that keeps on giving. I’ve said this before, but when it started climbing up the charts and went number one in 15 different countries, it put a lot of stamps on the passport and we did a lot more traveling than just performing at the local, dungeon-looking nightclubs down the street. We went everywhere. We opened for a lot of great rock bands like Aerosmith and Rush. It still feels great. I love singing it. The other day I heard it, I think in a supermarket, and when you hear it like that, you know it’s a gigantic hit. You hear the elevator music version of To Be With You, then you have people in line singing all the wrong words. It’s amazing.

The band has found another life online. To Be With You has over six million views on YouTube, and all of your videos total over 20 million views.
That’s crazy!

Many of your songs are being covered by kids who weren’t alive when you were most popular. What do you think of a new generation finding your music?
It’s really turned into second and third generations now. I’m so proud of the song. I wrote To Be With You when I was 16 years old. Then I kind of rewrote it again in the ‘80s. It’s a song I’ve had in my bag of tricks for years and to see it have wings, it blows my mind.

A lot of families will be at Walt Disney World when you guys play. Is it safe to say that “mom and dad” Mr. Big fans can bring their younger ones to the show?
Yeah, you can, but you’ve got to bring your ear plugs (laughs). We might be famous for our ballads, but we do a lot of your “meat-and-potatoes” hard rock ‘n roll too. Some of the younger fans like To Be With You, but you look in the crowd and see some of the hairs on their heads standing straight up after 10 hard rock songs. We aren’t only just about ballads. It’s not for little kids, but teenagers, that’s cool.

Do you have any favorite Disney attractions?
You hit the nail on the head. I love Pirates. I went to Disney a couple years ago with the kids and they loved the Swiss Family Robinson Treehouse. I know it’s totally old school, but they love that stuff. Years and years ago, Mr. Big, because we did so well in Japan, were asked to cut the ribbon at Tokyo Disneyland for an event. It was phenomenal, especially for me. My band probably doesn’t remember a thing about it, but not me. I remember everything about that day. I’m a sucker for that stuff.