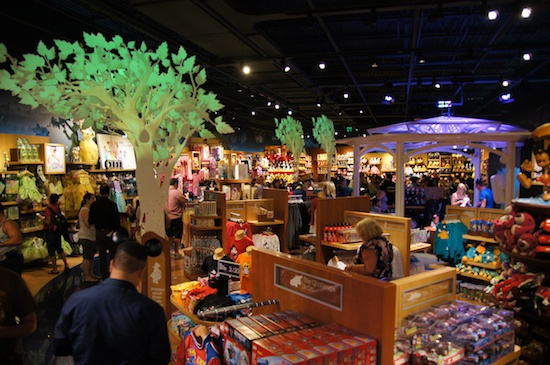 The Disney Store in the Florida Mall reopened this morning after being closed for conversion into a redesigned, interactive store. This Orlando store joins the growing list of newly-designed stores already opened around the world. By the end of the year, the specialty retailer will have 60 new concept stores in 16 major cities in North America and eight countries. Let’s take a look around and see what’s new. 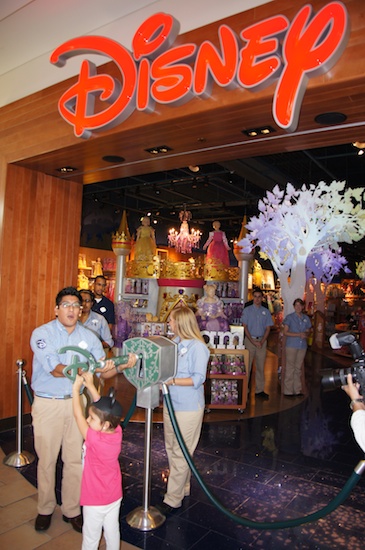 The store opened with as a child helped unlock the magic. As the lock was turned, music and lights lit up the store and the ropes dropped. This experience will happen every morning. 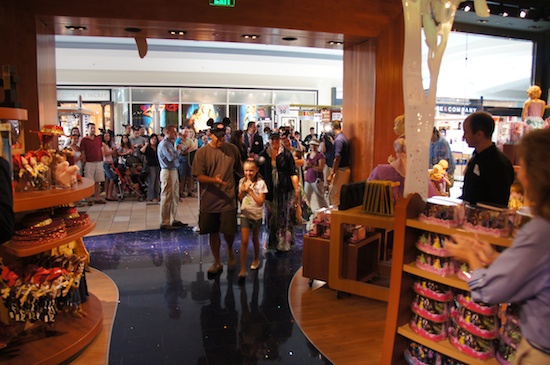 The first customers came into the store wearing special Disney Store Ear Hats that were given to the first 250 customers. 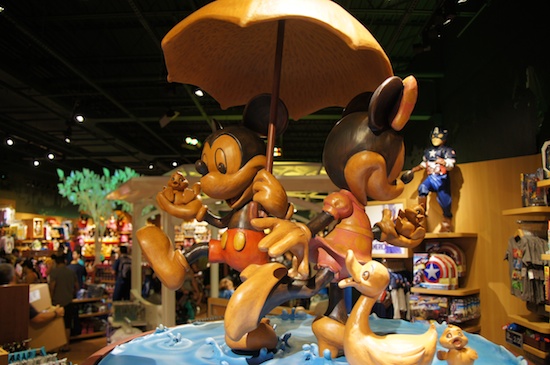 The old design of the store featured a lot of character statues around the store. This sculpture of Mickey and Minnie was the only one I spotted in the new design. 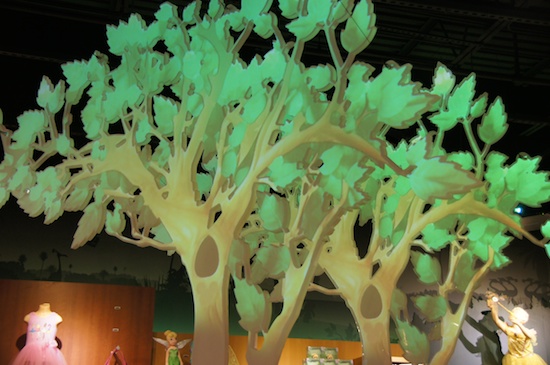 One of the first things you’ll notice are these trees around the store. You can’t see it here, but the leaves are moving. You’ll also see scenes of kids in Disney clothes and costumes and movie and cartoon scenes on the trees. 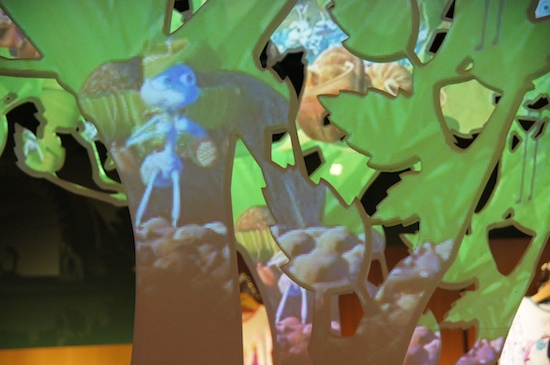 I don’t know if you spotted it in the photo above or if you can see it in this photo, but each scene that comes up features a Hidden Mickey somewhere on the screen. 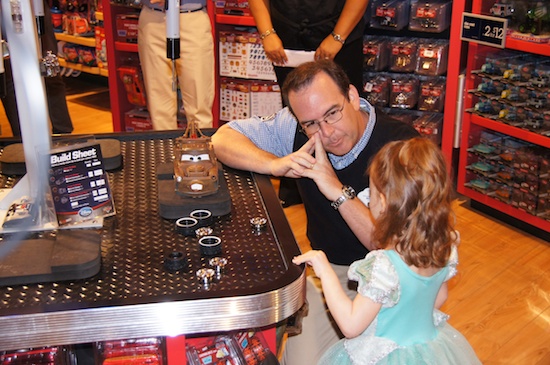 To your right when you enter is a selection of merchandise from the Cars movie franchise and some Cars Ridemakerz vehicles. If you’re not familiar with Ridemakerz at Downtown Disney, it’s a model car (or remote control) that you can customize. Here a cast member helps a little princess add wheels to Mater. 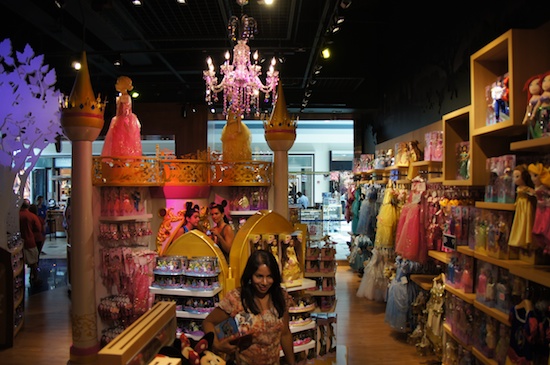 Also at the front of the store is a princess area with lots of interesting items for little girls (and some big girls). 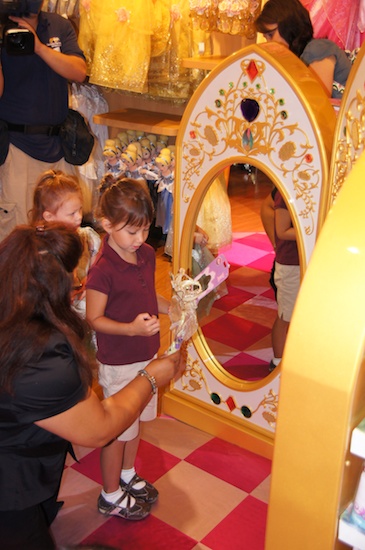 Inside the “castle” is a Magic Mirror. When you wave a princess wand in front of the mirror, a special scene appears on the mirror depending on which princess wand was waved. There are many different scenes and new ones are sometimes added. 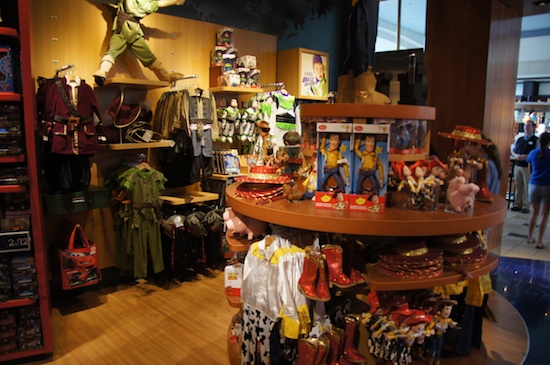 The store can help you get ready for Halloween, or just dress-up time, with many Disney costumes. 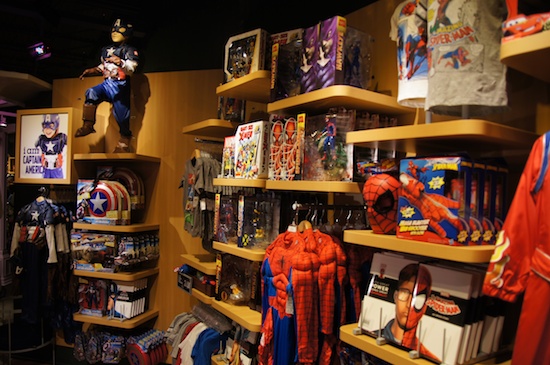 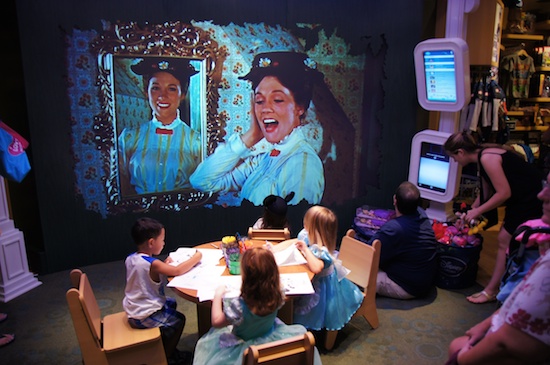 In the middle of the store is a theater and activity area. Kids can select which Disney movie or cartoon clips they’d like to see on the big screen. The screen can also display special events such as a birthday with a special message and flashing lights on the ceiling of the theater. 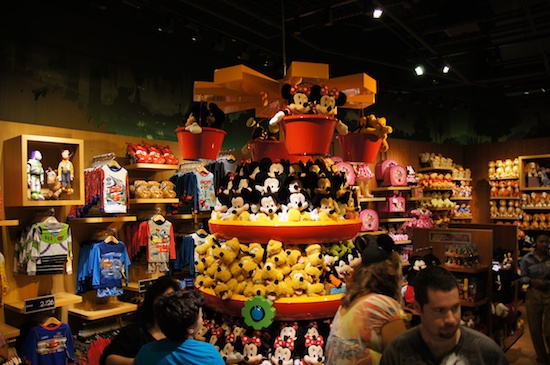 The back of the store is filled with plush dolls. The top of this display spins when kids spin the wheel below. There’s also a space for kids to crawl through the middle of the display. 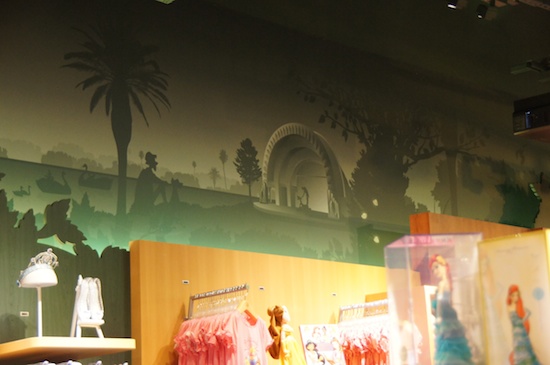 All around the top of the outside walls are scenes of Central Florida mixed with Disney characters. Here’s a look at Orlando’s Lake Eola area.

Here’s Buzz Lightyear watching the space shuttle lift-off with Space Mountain pictured next to him. 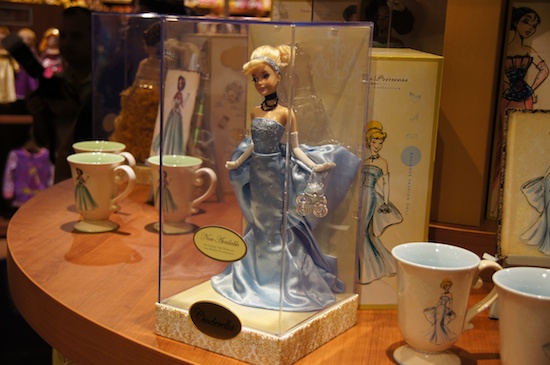 Now lets look at some of the most popular merchandise buyers were snapping up this morning. This high-fashion designer Cinderella doll is available in limited quantities. This store only had 12 to sell. A different princess will be available each Monday for $60, starting with Cinderella this week. See the rest of the princess dolls at the bottom of this post. 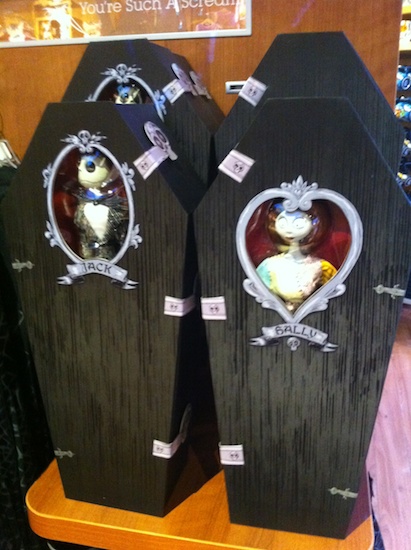 These Jack and Sally dolls were selling fast. They’re $100 each. 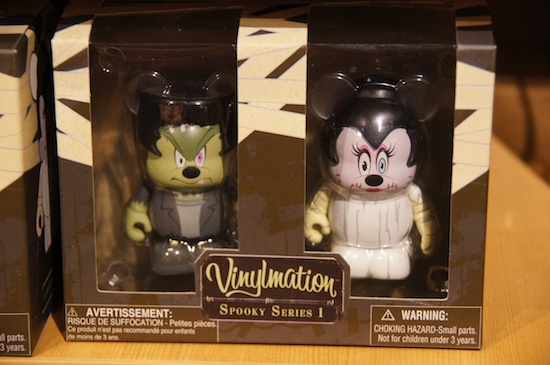 You can also buy and trade Vinylmation figures at the store. It seemed like every customer had one or more of this set in their hands. It’s Spooky Series 1 with Frankenstein and his bride.

Be sure to watch Episode 38 of Orlando Attractions Magazine – The Show for our feature and interviews from the newly remodeled store.

Here’s a look at the upcoming designer princess dolls. 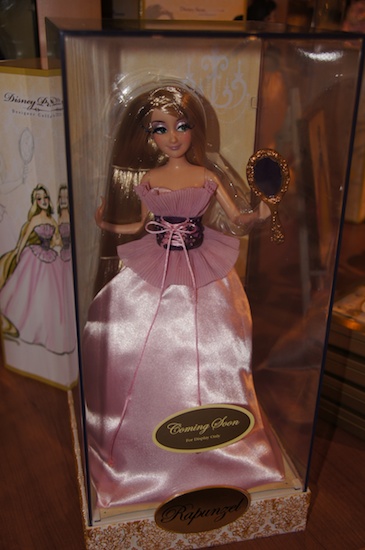 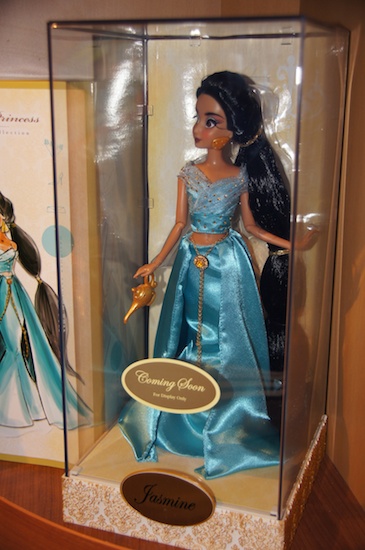 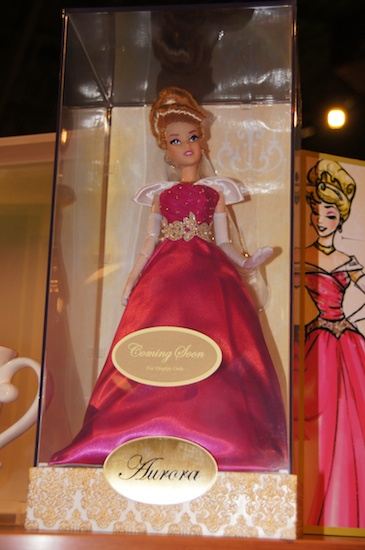 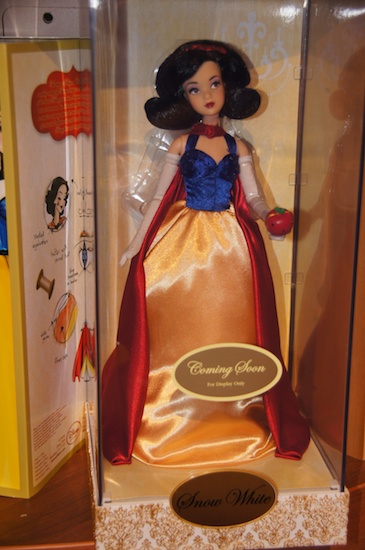 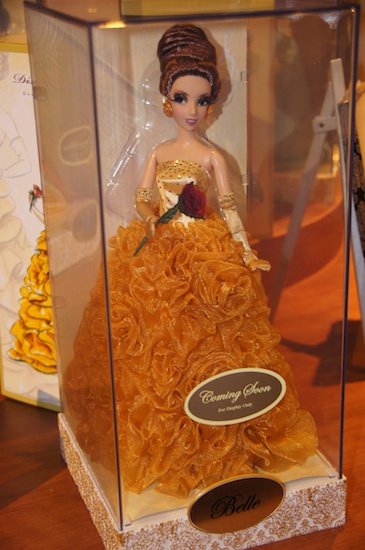 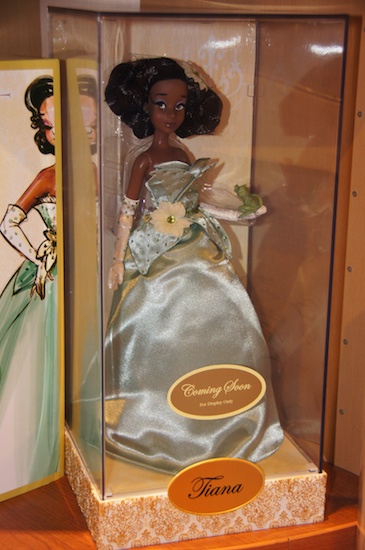 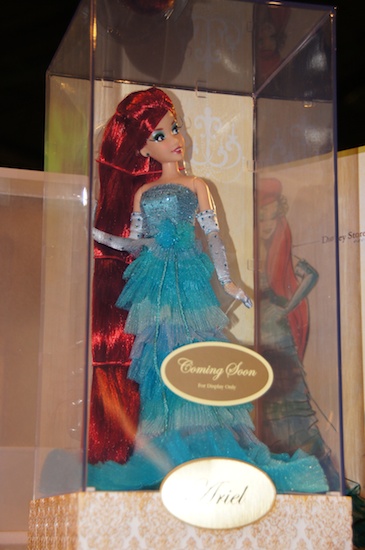 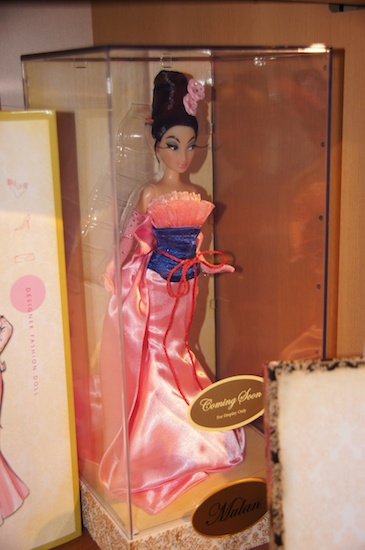 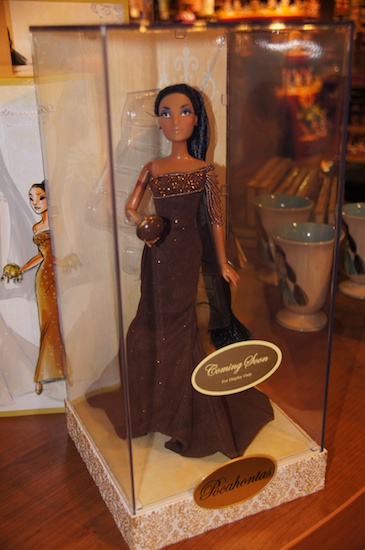 Ample Hills Creamery will not open at...