Now Open: Enter Beast’s Castle at the Be Our Guest Restaurant in New Fantasyland 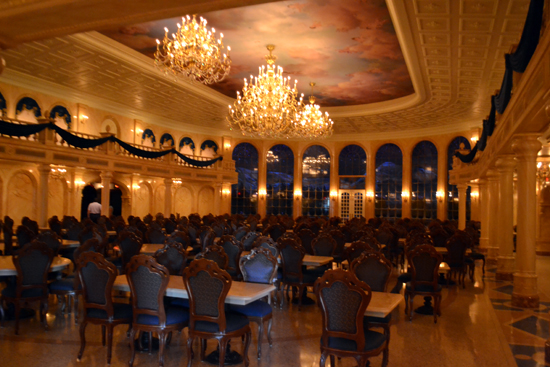 Guests can now dine one of three magical rooms inside the Be Our Guest Restaurant in New Fantasyland that bring the “Beauty and the Beast” story to life at the Magic Kingdom. From trying the delicious “grey stuff” to dining in the mysterious “West Wing”, guests will feel as if they just entered the Beast’s castle just as Belle did in the film.

“This is a whole new level of theming for a Disney restaurant,” said Maribeth Bisienere, vice president of Food and Beverage and Merchandise Operations Integration for Walt Disney Parks and Resorts. “More than ever, we’re using storytelling and creativity as we develop our menus.”

The storytelling starts with a forbidding castle situated in the hills above the Fantasyland “countryside.” Guests pass through the ruins of an old gateway to a stone bridge and through massive wrought-iron gates flanked by six beastly figures – the first of many design elements that reinforce the story of the Beast’s transformation. 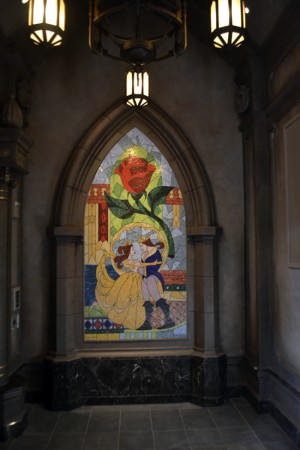 There are three dining rooms: the Ballroom, the West Wing and the Rose Gallery.

The Ballroom conveys the elegance of the film’s memorable scene in which Belle and the Beast whirled around a dance floor. A coffered, 20-foot ceiling painted with fluffy clouds and cherubs, sparkling chandeliers and a terrazzo floor sets the scene. At the far end of the room, 18-foot-tall arched windows look out to the French countryside, where a light “snow” falls through the starry night.

The “forbidden” West Wing dining room is darker and more mysterious, with the glass bell jar containing the enchanted rose slowly dropping petals as time runs out for the beast. Over the fireplace, a portrait of the young prince in human form is slashed by the claws of the Beast. As lightning flashes, the image in the portrait transforms, changing from prince to Beast.

The Rose Gallery dining room features a large music box centerpiece nearly seven feet tall with Belle and the Beast slowly twirling atop. Along the walls are paintings and tapestries that celebrate the characters from the story, with four of the tapestries inspired by background art from the film. Throughout the room, decorative roses are featured, including intricate tile mosaics on the floor.

The restaurant seats 546 for lunch and 340 for dinner (when the Rose Gallery is closed).

About four years ago, the Disney Food & Beverage team started creating a menu to match the theatrics. A team of Disney chefs, including longtime Disney Chef Roland Muller, a native of Alsace, France, developed the French-inspired dishes, creating both a quick-service menu for lunch and more elegant table-service menu for dinner.

“Our role is to finish the story,” said Walt Disney World Executive Chef Lenny DeGeorge. He describes lunch as more of a French bistro, with dishes such as a classic Croque Monsieur (ham, Gruyere cheese and béchamel), braised pork coq au vin style, vegetable quiche and a tuna Niçoise salad.

And just for dinner, select wines and beers will be offered that complement the French-inspired cuisine.

Watch below as we get a full tour of the Be Our Guest Restaurant led by a cast member:

Here are some fun facts about the Be Our Guest Restaurant:

To make a reservation, guests can call (407) WDW-DINE or book online at www.disneyworld.com/dine. On the Disney Dining Plan, Be Our Guest Restaurant is on one QSR entitlement for lunch or one TSR entitlement for dinner. The Tables in Wonderland card is also accepted.

Now Open: Journey with Ariel ‘Under the Sea’ at New Fantasyland

What you need to watch to prepare...