Now Open: Journey with Ariel ‘Under the Sea’ at New Fantasyland 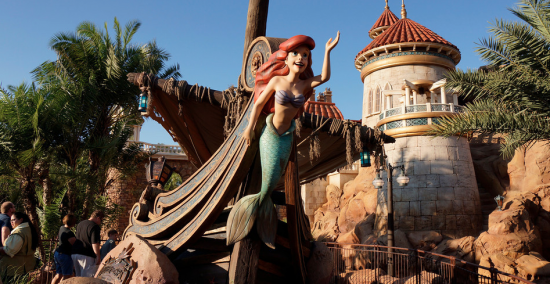 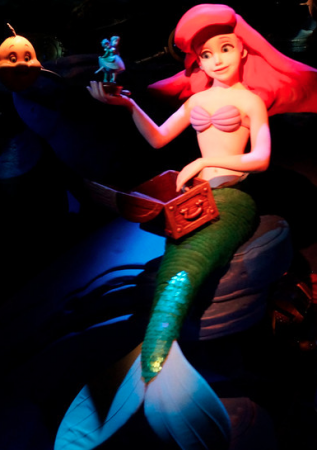 Set in and around Ariel’s underwater world and located inside New Fantasyland, the new attraction combines the enduring appeal of a classic Disney “dark ride” with wonderful technological innovations to offer guests a personal journey into the scenes of the film.

“It’s so exciting to bring these classic Disney characters to life,” said Chris Beatty, creative director for New Fantasyland. “To be able to recreate Ariel’s world and invite our guests to Prince Eric’s Castle and then under the sea to meet Ariel and her friends is something that’s truly magical.”

Guests arrive at the shoreline of Prince Eric’s Castle and descend through the grottos and caverns to board their clamshell. Along the queue, the fun begins. Guests encounter a shipwreck along the smooth rocks of the cliffs. As guests descend deeper into the grottos and caverns, sea life, including barnacles and starfish, appear to help guide them to their destination. Mischievous little crabs engage guests in games of “trash” or “treasure” to help the crabs fill their treasure chest.

Guests begin their journey by boarding their own colorful “clamshell” ride vehicles. Scuttle, the tale-spinning seagull, welcomes guests as they embark on their adventure, doing his best to tell the story of Ariel’s ambition to leave her ocean home and become part of the human world.

To meet Ariel and participate in her adventure, guests must first head “under the sea.” A combination of special effects creates a sense of descending to the ocean floor, all without leaving the clamshell vehicle. The first locale on the underwater journey is Ariel’s grotto, where she keeps the treasures she has found on land – whozits, whatzits and thingamabobs – and sings “Part of Your World.”

Next, in a musical with an underwater party atmosphere, dozens of singing and playing marine creatures try to encourage Ariel to remain “Under the Sea.” The conductor, of course, is Sebastian the crab. Despite the warnings, Ariel is determined to visit the Sea Witch to find a way to become human. Ursula’s lair is another stunning scene, featuring her slithering henchmen Flotsam and Jetsam and Ursula herself – seven and a half feet tall and 12-feet wide – from tentacle tip to tip. Ursula sings her signature piece, “Poor Unfortunate Souls.”

Next, as Ariel’s wish to be human is granted, guests follow her up to the ocean surface, where they witness Ariel’s friends encouraging Prince Eric to “Kiss the Girl.” This inspires a stormy response from the villainous Ursula and leads to the finale, which holds some surprises – even for those who know and love the motion picture.

Check out this full walkthrough of the queue and a ride-through below:

“Many times I’ve thought, ‘Why didn’t we have a Mermaid attraction sooner?’” Keane said. “But now I’m glad we didn’t. They’ve done this one so well.”

Guests can also meet and greet with the Little Mermaid herself next door at Ariel’s Grotto. Watch as we meet Ariel below:

Here are some fun facts about the attraction:

Now Open: Enter Beast’s Castle at the Be Our Guest Restaurant in New Fantasyland