One Direction to perform at Universal Orlando, plus added to two attractions 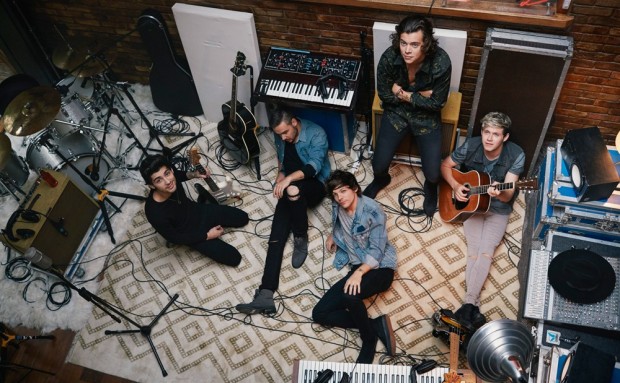 On Monday, Nov. 17, 2014, One Direction will descend on Universal Orlando with a public concert and special offerings in the Studios park.

In promotion for their new album, “Four”, One Direction will be holding a concert for NBC’s “Today” on Nov. 17 at Universal CityWalk. The performance is free to attend for the public, no park admission required.

If you’re staying at Cabana Bay Beach Resort that day, you may encounter some One Direction theming there as well, even get a wake up call to your room from the band members themselves. 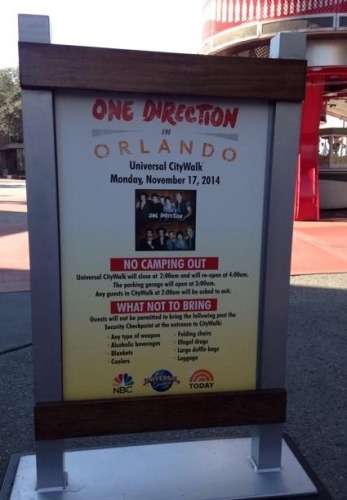 Q: How early can you arrive to CityWalk?
A: The Universal Orlando Resort parking garage will open at 3 a.m. and regular parking charges will apply. CityWalk will not open until 4 a.m.

Q: Is it first come, first serve?
A: Designated viewing will be available throughout CityWalk on a first come basis and is limited by capacity. No theme park admission is required.

Q: How much does it cost?
A: The concert is complimentary; no ticket purchase is required for NBC’s Today/One Direction limited performance, however regular parking charges will apply.

Q: What time will the concert start?
A: NBC’s Today will broadcast live from Universal Orlando from 7 a.m. to 10 a.m. The One Direction performance will take place during this time.

Q: Will this be broadcasted?
A: Yes, it will be broadcast between 7 a.m. and 10 a.m. on NBC’s Today and Telemundo’s Un Nuevo Dia.

Q: Will there be meet and greet opportunities throughout the day?
A: There will not be meet and greet opportunities with the band. However, in celebration of the new album, fans visiting Universal Studios on November 17 and 18 can experience a specially themed Hollywood Rip Ride Rockit roller coaster featuring music from 1D and a special, 10 minute, 1D version of the Universal Cinematic Spectacular nighttime show.

Guests inside Universal Studios can join the social media action at the One Direction in Orlando Fan Zone on Park Avenue. In addition, guests staying at Universal Orlando’s Cabana Bay Beach Resort will have an opportunity to attend an exclusive album release pool party for fans* on November 16 to hear the album before it is released.

Q: Will there be any sort of contests to meet the boys or backstage passes?
A: You can learn more about various contests at 1DOrlando.com.

Busch Gardens Tampa to debut a Food & Wine Festival in 2015

How is it they can do this, but they can’t do some cool Halloween bonus tracks for Rockit?

What time will one Direction perform there?

Since it’s live on the Today Show, it will most likely be between 8 and 9 a.m.

What time is the concert?

What time is the concert

My daughter was granted a wish but I think we will be to late!! Her first wish was to meet them!! Hopefully she will get a glance somehow!!

A look inside the scare zones of...

Off Kilter to perform at British Bonfire...