Our current issue (Feb./March 2009) features a story called Happily Ever After by Julie Saunders. The article profiles different couples who’ve had some sort of romance in the theme parks, such as proposals, weddings and renewals. Unfortunately the article went a little too long for the space we had allowed and one couple was left out. So here’s their story along with the introduction from the article. 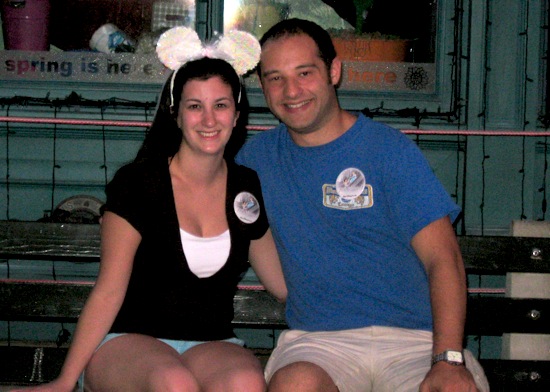 Fairy tale beginnings evoke romance, when “once upon a time” could be a first meeting, engagement or wedding at a variety of theme park venues. Couples yearn for magical memories of these milestones in their lives and often personalize their proposals and weddings to match their interests. This is especially true of theme park fans, where brides and grooms transform into Cinderella and Prince Charming – if only for a day.

Matt and Marissa Hochberg of Orlando

Introduced online, when Matt and Marissa met for the first time in March 2005, they instantly “clicked.”

Their long-distance courtship consisted of visits to each others home states and trips to Disney World. In December 2006, Matt popped the question during the Osborne Spectacle of Dancing Lights at then Disney-MGM Studios. Marissa recalled, “Matt had a friend plant a bouquet of roses by a bench, which he produced with a ring while proposing on one knee.”

After moving to Orlando, the Hochbergs were married last September. Their honeymoon included a cruise and several days at Disney World. Matt declared, “I love being able to share my passion for Disney with my wife.”

‘Last to ride’ alert for Wildcat at...