Out of the Loop: A report from Holiday World’s Holiwood Nights 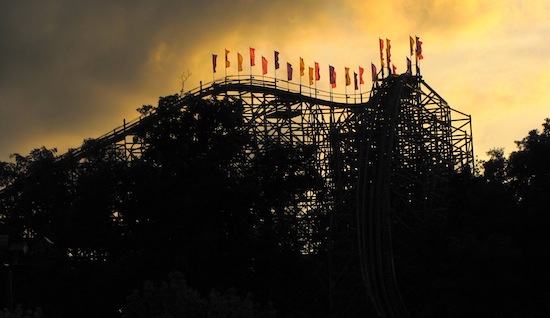 Seemingly arising from farmers’ fields, in the quaint little town of Santa Claus, Ind., sits one of the gems of the theme park industry – Holiday World. Opened in 1946 as Santa Claus Land, it is America’s first ‘theme’ park. Louis Koch built the park and the Koch family continues to retain ownership. It was in the mid-80s when the park was expanded beyond Christmas to include Halloween and 4th of July sections and the name was changed to Holiday World. Into the 1990s, Splashin’ Safari water park opened ushering the park into the modern theme park era. 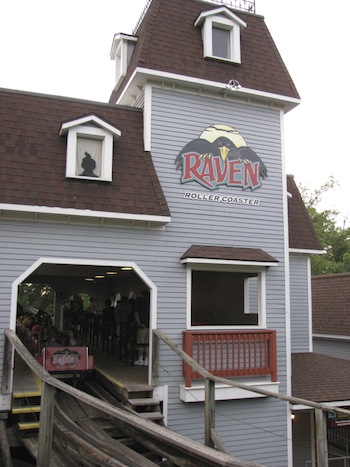 However, it was not until 1995 that the park’s first coaster opened, The Raven. This terror-filled romp through the woods is worthy of its namesake, Edgar Allen Poe’s poem. The coaster is situated at the front of the park welcoming thrill-seeking guests. Holiday World then opened The Legend (as in ‘Sleepy Hollow’) in 2000. As riders leave the station, a ride operator manually pulls on a cord that rings a creepy school bell above the ride in a steeple, signaling the beginning of coaster ride designed to mimic Ichabod Crane’s flight from the Headless Horseman. The Legend literally snakes up, down and all around several of the larger water park slides before entering a double helix and finishing with several sharp turns before braking kicks in.

In 2006, Holiday World was transformed into a wooden coaster junkie destination with the opening of The Voyage. The Voyage opened as the centerpiece of the newly opened section of the park, Thanksgiving. The ambitious, aggressive Gravity Group design is quite relentless in its thrill delivery. The ride delivers a staggering 24 plus seconds of airtime. Riders face major Gs with 90 degree banked turns. When the ride reaches its turnaround point, it does not simply reverse direction and come home. Instead, it enters what 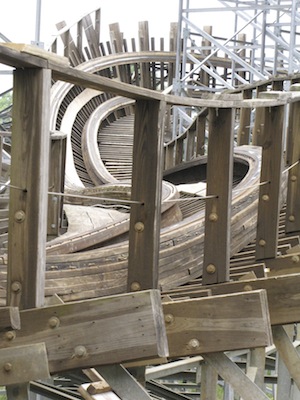 coaster enthusiasts refer to as the spaghetti bowl. You are thinking, spaghetti in a bowl wraps over, under, and around itself – yes! Finally, riders bank over and around the entrance to Thanksgiving and the terrifyingly wonderful ride is over. And, there you have it – a trio of woodies not easily matched by any park.

But, coasters are no longer limited to wood and steel track. Over the past several years, Holiday World has grown Splashin’ Safari into one of the premier water parks in the world boasting the longest and second longest water coasters in the world. Both rides utilize an initial hill conveyor belt system then use linear induction motors to shoot rafts up the remaining hills. I never thought I would discuss airtime in a waterslide, but The Wildebeest’s four-person toboggan-style rafts deliver just that over its 1,710-foot course. The Mammoth’s record-breaking ride of 1763-feet is quite different. Six riders sit on individual tubes connected in the middle with feet facing in. This allows the raft to rotate along the course, up and down the hills providing a degree of unpredictability to the ride.

All of these rides were featured at Holiday World’s coaster enthusiast event known as Holiwood Nights. With a coaster club membership and a modestly priced event ticket, coaster fanatics received a day and a half of exclusive access to these rides and other perks. Shortly after the park closed to the public on Friday May 31, event attendees were escorted to a picnic grove on the far end of the park. Around 7 p.m., when the last of the day guests were cleared from the park, the coaster “crazies” scurried to their favorite of the three woodies. The included dinner of pizza, veggies and fudge(!) was served in the Kringle Kafe. Riding continued until 11 p.m. This was my wife and I’s first coaster event. We had never had access to coasters like this before. At one point, we had three straight front seat rides on The Raven! Our ride numbers were modest compared to what we heard from other attendees – Raven 7, Legend 4, Legend 4, but I thought a great start. 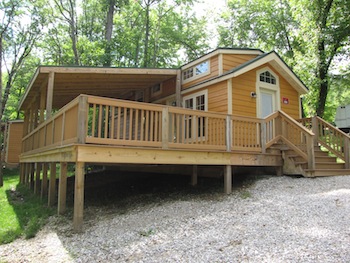 We headed back to our cabin at Lake Rudolph a bit early knowing we had a long day ahead of us on Saturday. Lake Rudolph Campground and RV Resort seems the perfect home base for guests of Holiday World. Situated next door to the park, a shuttle runs about every 20 minutes. In addition to camp and RV sites, there are permanently set up RVs for rent, but our favorite choice is the growing number of cabins. We stayed in a Rudolph Christmas cabin that was not in the least roughing it with three flat screen TVs, full sized oven, stove, and refrigerator/freezer, and most of all, running water with a shower!

We heard hard storms all night and awoke to showers, thankfully without lightning or thunder. Braving the 60-degree rainy weather, we arrived with several hundred other crazy folks headed toward the waterpark at 8 a.m. sharp! We were given a breakfast of fresh fruit and muffins and afterward proceeded to Wildebeest. Shivering, we braced for a cold splash as our raft climbed the lift hill. To our surprise, the water was warm! In fact, all of the attractions open that morning had warm water. Attractions open to attendees were Wildebeest, Mammoth, the wave pool and the new Hyena Falls slides. Our favorite was Wildebeest – we rode eight times. When the rest of the water park opened to the public, the other attractions opened and the sun came out. We rode the rest of the big slides before heading back to our cabin for a quick rest.

In the afternoon, attendees were treated to a backstage tour of The Voyage. We were able to photograph and video as we walked along the maintenance road, closed to the public. As we arrived at the spaghetti bowl, we were fed a nice afternoon snack of cookies, fruit and water. After the tour, we rode many of the other non-coaster attractions in the park. 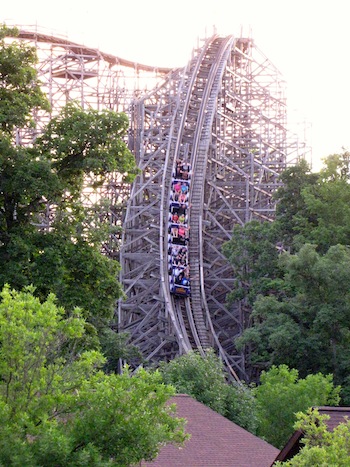 We started the evening with dinner. We had fried chicken, burgers and pulled pork BBQ with all the fixins and dessert. A silent auction of Holiday World memorabilia benefited the Santa Claus Museum and Village. Around 9 p.m. the park was cleared and we were off again! We got all the rides we could handle. Our final total was 32 rides on the three coasters. I am certain some enthusiasts had double or more. But, I can tell you, I was completely satisfied with my experience.

The coaster fans were a widely diverse group. Some girls and boys seemed to just meet the 48” height requirement. Others appeared to have seen many coasters come and go over decades. We saw coaster T-shirts from across the country. We saw couples, families and buddies. There were attendees from many states as far as Florida, Washington, Nevada and the east coast.

There are many reasons why guests are drawn to Santa Claus, Ind. and Holiday World. Some come for the coasters. Some come for the waterpark. Families come for the value of unlimited free Pepsi soft drinks, free sunscreen, free parking and the two parks for one price. Whatever the reason they come, guests told me they stay because Holiday World feels like home. There is a brand of friendly that the workers deliver that is not fake in the least. The park is more spotless than any I have ever seen because the employees care as if it was their own. In fact, I have witnessed park matriarch Pat Koch wiping down tables and picking up a stray food wrapper. This welcoming feeling was displayed by the ride operators, cleaning crews and maintenance folks, all the way up to new park president Matt Eckert who hung out with the coaster fans and didn’t miss the opportunity to jump on a ride with his management team for a bit of fun on the job! It is the kind of place that you begin planning your return visit while you are still enjoying the park.

New food trucks to debut at Downtown Disney this fall

Celebrate the holidays at Icon Park with ‘The...

The Christmas Celebration is returning to SeaWorld San...

Enjoy ‘Breakfast with Santa’ this holiday season at...

Brick-or-Treat returning to Legoland California with its...

Graceland to reopen its gates to guests...