The latest of Disney’s year-long Limited Time Magic promotion, and one of their most popular, was held this past Friday the 13th at Disney’s Hollywood Studios. Fans came out in droves (and many were turned away) for the “Unleash the Villains” event. 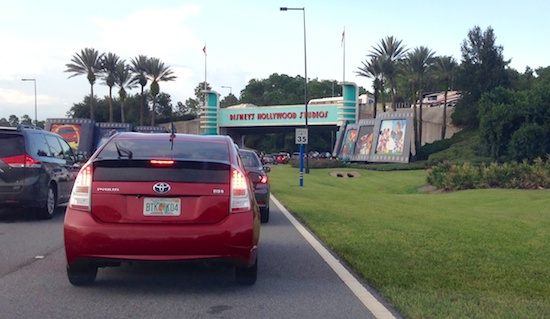 The event was to run from 8 p.m. to 1 a.m. and we made the mistake of thinking we could arrive sometime after 6 p.m. By that time, cars were lined up and down both sides of Buena Vista Drive trying to get into Hollywood Studios. We tried entering that way but after sitting in traffic for about 20 minutes, we decided to try the entrance off World Drive. Thankfully that way was moving more quickly. We heard other guests weren’t as lucky. Some sat in traffic for two hours only to be sent to Epcot to park and be bussed over. We heard the park eventually closed to capacity. 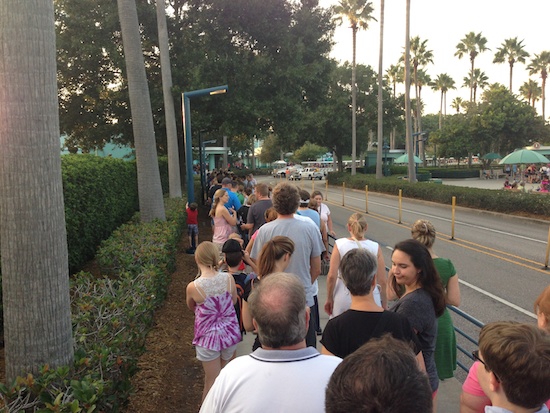 Although the parking lot was just about full when we entered, we managed to find a spot. This is a look at the line for the security bag check to the left of the park entrance. 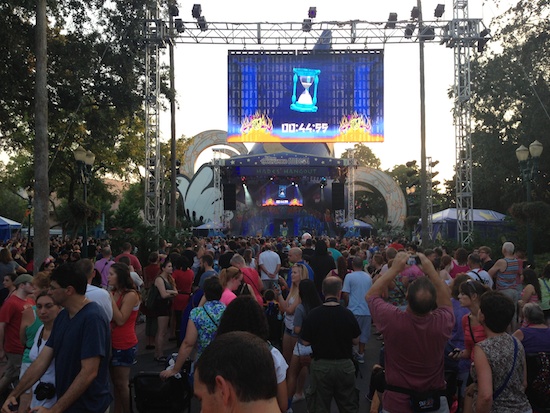 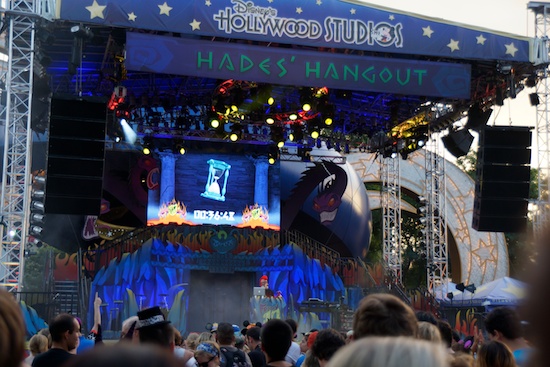 DJ Igg Nite (AKA DJ Elliot) started playing his Villains mixes at 7 p.m. to keep the crowds entertained. You can listen to what he was playing on his SoundCloud page.

After their introduction, the villains dispersed. Some of them headed down among the crowd while others alternated at three meeting spots around the lake. Some guests waited more than three hours to meet the rare characters. Here’s a look at all the meet and greet characters:

While the six villains were meeting lakeside, DJ Igg Nite rotated onstage about ever half-hour with the villains’ house band, Brimstone, led by Bernie Briquette (AKA Mulch Sweat and Shears). Once in a while, Hades and Meg joined them onstage: 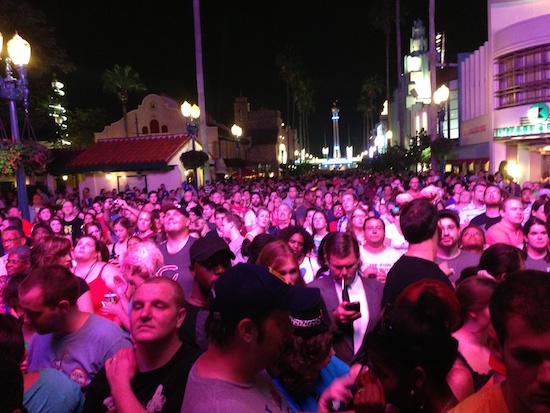 Then at 11 p.m., it was time for the Villainy in the Sky fireworks show. This is a look down Hollywood Boulevard at the crowd waiting for the fireworks.

Many have said this fireworks show is the best they’ve ever seen. Judge for yourself here:

At 1 a.m. it was time for the villains to go. Hades invited them back onstage one at a time before heading out himself. (Don’t miss the exit music that was playing as guests left the studios at the end of this video):

Here’s our photo gallery from the night, followed by more videos of the individual meet and greets with the villains:

Out of the Loop: A report from Holiday World’s Holiwood Nights

Inaugural Blogger Bowl raises more than $20,000 for Give Kids The World Village