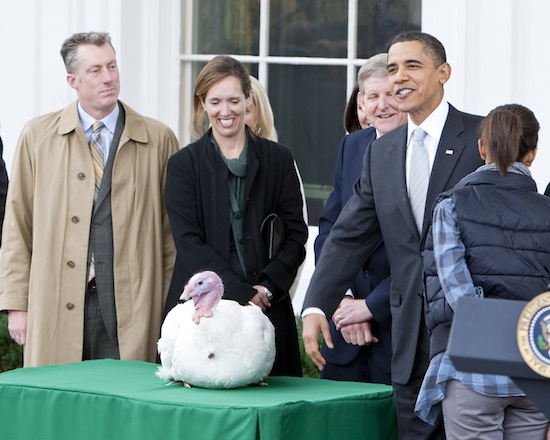 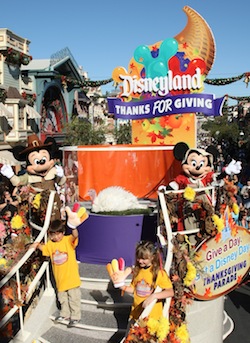 Washington, D.C. and Anaheim, Calif. – The first mention of a ceremonial turkey presentation at the Whitehouse (stop snickering, an actual turkey) was during the Truman administration. No mention is made in the literature about a Presidential Pardon. It wasn’t until the first George Bush’s administration in 1989 that the yearly tradition of “pardoning” the noble bird stuck.

For President Obama’s first Thanksgiving, a turkey named Courage won the turkey lottery and was pardoned. As with any major victory, whether in sport or for one’s very life, in an interview, Courage was asked, “Now that you’ve been pardoned, what are going to do?” Courage answered with an emphatic, “I’m going to Disneyland!” Indeed, every turkey since 2005 has taken the flight to a Disney park.

Courage was the grand marshall of the Thanksgiving Day Parade through Disneyland. He and 200 volunteers were honored. The volunteers were so honored to highlight next year’s promotion and initiative “Give a Day, Get a Disney Day” that kicks off Jan. 1, 2010. Guests who volunteer a day will receive free admission to a Disney park in 2010.

Visitors coming to Disneyland can see Courage at the Big Thunder Ranch in Frontierland where he and his alternate, Carolina, will live out the rest of their days.

Zombies from the dark side will invade...

Snow and Ice in the forecast at...