Out of the Loop: Disneyland Paris to add a ‘no-brainer’ Ratatouille attraction 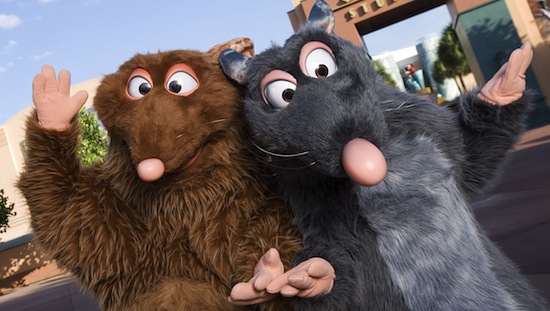 Marne-la-Vallée, France – At the annual Euro Disney shareholders meeting, Chairman Philippe Gas announced a new Ratatouille attraction would be completed by 2014. The recipe is simple: by making an investment in high quality guest experiences, the resort will continue to strengthen its multi-day appeal to resort guests. Pardon the corporate-speak, but indeed, the strategy appears to be paying off. As Disneyland Paris celebrated its 20th Anniversary in 2012, it broke attendance records with 16 million visits. This is a far cry from the early days when the park struggled to be profitable in a then down economy with a less than enthusiastic public.

To be built in the Walt Disney Studios Park, the attraction will combine Disney Imagineering technology and storytelling in a theme that is described as uniquely “français”. It will pay tribute to the French capitol, Paris, and the characters from the Disney Pixar Ratatouille movie. The movie is set in Paris and follows the adventures of Remy the rat who has aspirations of becoming a famous French chef.

Details of the attraction are … well, there aren’t any yet. But I suspect it will be more than a rat on a plate!

21 years in a couple of weeks it’s about time we had a TOON TOWN ship Mickey, Minnie and GoOfy houses and Donald’s boat from Florida as they don’t want them