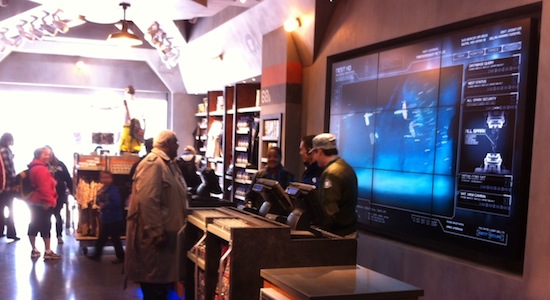 A milestone was passed yesterday in the very fast construction of Transformers: The Ride 3D at Universal Studios Florida. The gift shop for the attraction, called the Supply Vault, is now open, well before the ride itself opens. It was less than a year ago when the building that was in this location was torn down.

Inside the Supply Vault fans can purchase T-shirts, mugs, bags and other souvenirs, including of course, Transformers toys – some made specifically for the attraction.

Here’s our video inside the store:

Later that morning, two of the characters, Optimus Prime and Bumblebee, met guests outside the store. Optimus even spoke to guests:

Videos and photo by Banks Lee.

Out of the Loop: Disneyland Paris to add a ‘no-brainer’ Ratatouille attraction

I am amazed for a gift shop a lot of detail.