Out of the Loop: Disney’s California Adventure to debut new nighttime fountain show 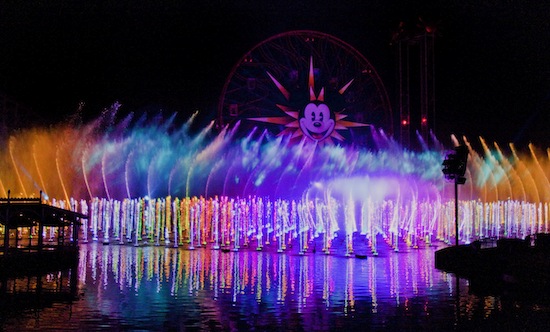 Anaheim, Calif. – June 11, 2010 is the day. World of Color, the next generation Disney nighttime water spectacular, is set to debut. Maybe you’ve seen Fantasmic; maybe even the fire-breathing dragon in Disneyland. I’ve seen it. It’s cool. Maybe you’ve seen the fountains of the Bellagio in Las Vegas. These fountains put on a show that’s equally amazing whether the soundtrack is Chopin or Elvis – every 15 minutes on the Vegas Strip. I’ve seen Tinkerbell fly over Cinderella Castle and Sleeping Beauty Castle, and the night sky burst with color and boom. I’ve witnessed many July 4th celebrations. Illuminations at Epcot remains one of my favorite all time night shows with its multimedia floating globe, fireworks, and message of hope. But I expect World of Color will surpass all of these and become my favorite night show of all time.

High expectations? Perhaps, but let’s take a look at some of the show’s technical facts: 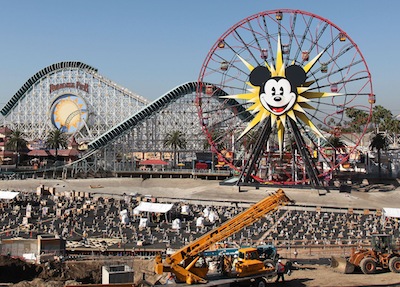 • 1,200 programmable water fountains capable of shooting water from between 30 and 200 feet into the air.
• Nearly one acre of superstructure with a width longer than a football field.
• An underwater grid with more than 18,000 points of control. Each fountain has multiple points of control for lighting, color intensity, water angle, and height.
• A precise system of flame projections, lasers, and other special effects.
• Scenic elements that rise more than 80 feet above the lagoon.
• The world’s largest projected water screen with a wall of water 380 feet wide by 50 feet high for a projection surface of 19,000 square feet.
• Nearly 30 high-definition projectors (Fantasmic in Disneyland upgraded to high- definition projectors last summer).
• Some of the movies to be features: The Lion King, The Little Mermaid, Toy Story, Wall-E and others.

I’m supposed to be there for the show’s debut. I’ll have tripods, camera and video on hand to try to capture the moment. But, like many of these shows, I suspect one will just have to see it to believe it. In regard to those sky-high expectations, I’ll put my faith in the Disney Imagineers.

The Bellagio Fountains in Vegas are at the same number as Disney’s at 1,200. One big difference – Bellagio’s fountains can shoot water up in the air 460 ft. Why did Disney stop at just 200 ft. – I wish Disney would have a least matched the Bellagio’s especially since their fountains were built back in 1998. I will give Disney props on the fire and led lighting.

The Bellagio fountain system consists of 4 different nozzles capable of different types of effects. These include “oarsmen” which shoot in a spherical pattern, “shooters” that shoot straight up, “supershooter” that shoot up to 240, and “extreme shooters” that you mentioned that shoot 460 feet.

I can’t answer for Disney, but I think they would say that it is not about topping what is out there in terms of technical capability, but rather doing their own thing and creating a whole package worthy of the Disney name. I am certain there is an engineer or perhaps more appropriately and “Imagineer” out there who could point by point explain why the World of Color fountains are more technically advanced, but I would venture to say that they’d say that’s not the point.

ps I NEVER miss a chance to watch the Bellagio Fountains whenever I am out in Vegas. Despite not being the newest or the biggest, I love that hotel.