It didn’t come by owl, but we just received a media invitation to attend the grand opening of The Wizarding World of Harry Potter at Universal’s Islands of Adventure. Here’s a look at the unboxing. 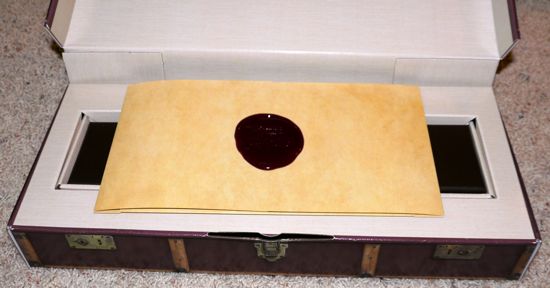 Once the distressed looking box is open, you can see a letter sealed with a wax stamp of the Wizarding World logo. 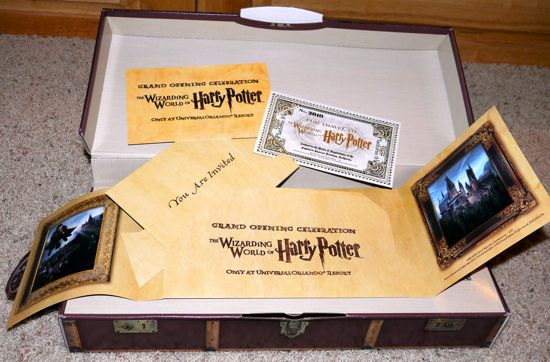 When the seal is broken and the flaps are lifted, the smaller envelope inside “magically” slides up. Inside is an invitation with the details and a ticket for the Hogwarts Express. The invitation tells us to reply by e-mail, telephone or owl. It also says no ticket or wand is needed for admittance. It also says the grand opening will be resort casual attire. 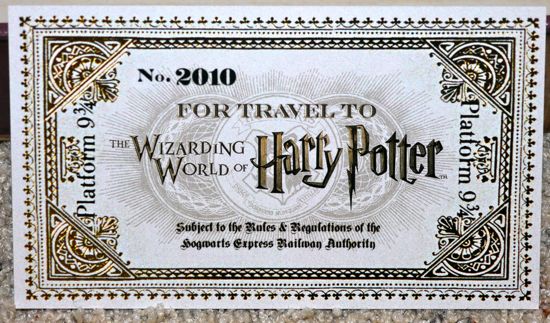 Here’s a closer look at the ticket to Platform 9 3/4 for travel to The Wizarding World of Harry Potter. 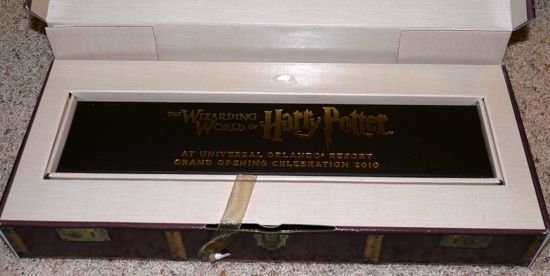 Below the envelope is a box, and inside the box is… 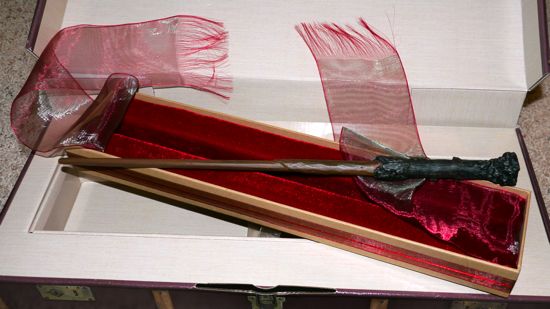 A magical wand. The wand is well made and is more substantial in your hands than you might think. It’s not made of wood – it’s a heavier material, some sort of painted metal. I assume this is the same sort of wand that will be sold in Ollivander’s Wand Shop. Wooden wands wouldn’t last long in most kids’ hands.

The grand opening for The Wizarding World of Harry Potter is June 18. Keep checking back for more updates as the date draws near, and for announcements of possible early openings.

Out of the Loop: Disney’s California Adventure to debut new nighttime fountain show

Absolutely awesome! Wish I had one. 🙂

How awesome is that! So very cool. I’m so jealous. We’ll be down in May, a few weeks early for the Wizarding World. Oh well, always have to have a reason to com e back!

How did you get the invitation?

It was sent to members of the media.

I want one of those!!. It would be the greatest of gift for my little niece!!!. Is there anywhere where I can buy that, or a replica. Please let me know. It would make my niece really happy.

While it won’t be the exact package we received, you will be able to buy wands like that one at Islands of Adventure once the Wizarding World opens.

My idea is to combine the letter, the ticket, a wand and a broom and give it to her on her birthday and then tell her that I’m taking her to Universal Studios on July. I got everything BUT the Hogwart letter, and the platform 9 3/4 ticket, which I can not find anywhere!!! Do you know of any site in which I can buy a replica of the letter and the train ticket??
Please help me!! Her b-day is on May 12.
Thanks!!

Matt has some pretty good pictures of these items. You or someone else handy with a computer along with some nice paper from a stationary store could choose a nice matching font and create these objects.

Hey, Silvia
I recommend getting heavy cardboard paper to print on. After you have printed on the paper squeeze lemon juice on the paper and then put it in the oven (It will make it look old, just make sure you don’t get the juice on the picture).

Download this font so you can write the letter and make it look authentic.
https://www.mugglenet.com/downloads/fonts/

For the pics use these.
https://www.confettimedia.in/custommediaindia/images/The-Wizarding-World-of-Harry-Potter.jpg

-I can’t tell you how to do everything, but with a little creativity you can do it. If you have any questions or get stuck just respond back. Also, to make the train ticket shine will be difficult, work at your skill level.

If you send me an email, I can help you out more. [email protected]