Out of the Loop: New Disneyland show mixes live performances and technology to tell the story of ‘Mickey and the Magical Map’ 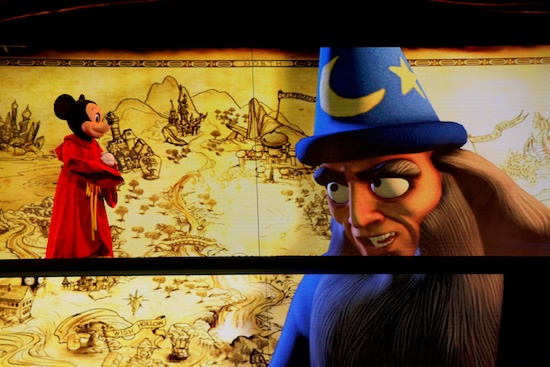 Mickey Mouse and a cast of beloved Disney characters have embark on a series of musical adventures through the magical powers of a sorcerer’s map in “Mickey and the Magical Map,” the all-new live show in the Fantasyland Theatre in Disneyland Park.

Created by Disney Creative Entertainment, “Mickey and the Magical Map” was conceived for children of all ages and represents the return of Disney storytelling to the newly refurbished Fantasyland Theatre, a venue that merges the tradition of live outdoor performances with theatrical technology.

“We’re very excited to welcome guests to the Disneyland Resort this summer to enjoy all the entertainment and attractions that make this a world-class, family vacation destination,” said Michael Colglazier, president of the Disneyland Resort. “We’re particularly thrilled to debut our captivating new show ‘Mickey and the Magical Map’ and to invite guests to experience Fantasy Faire, a new themed area with Disney Princess encounters and two live shows based on favorite princess stories.”

“Mickey and the Magical Map” presents Mickey in his timeless role as the sorcerer’s apprentice. Wise sorcerer Yen Sid directs his Mapmakers, a singing-dancing ensemble cast that paints an interactive map – capable of taking dreamers to any place imaginable and so large it spans the entire stage of the outdoor Fantasyland Theatre. The innovative map features nearly 1 million pixels and more than 35,000 square inches of LED screen surface. Apprentice Mickey lets his curiosity get the better of him and he stumbles upon the map’s magical powers, which take him, along with the audience, on a journey of imagination.

The journey, presented through theatrical stage wizardry, unveils wonderful worlds of music, color, adventure and beloved characters with each new direction – all set to an original song, “Journey of the Imagination,” and music from classic Disney films.

The show, scheduled for five daily performances this summer, features appearances and songs by King Louie from “The Jungle Book” (“I Wan’na Be Like You”), Pocahontas (“Just Around the Riverbend”), Mulan (“Reflection”), Rapunzel and Flynn Rider from “Tangled,” (“I See The Light”) Princess Tiana from “The Princess and the Frog” (“Dig a Little Deeper”), and Sebastian from “The Little Mermaid” (“Under the Sea”). Also included is the song “Hawaiian Roller Coaster Ride” from “Lilo and Stitch.”

“Mickey and the Magical Map,” which can be experienced only at Disneyland, will be a highlight of 2013 at Disneyland, which also features recent additions such as princess encounters in the new Fantasy Faire.

“Mickey and the Magical Map” has writing by Carolyn Gardner and is directed by Tracy Halas. The production designer is Steve Bass; the creative director is Sylvia Hase; the music is produced by Bruce Healey, supervised and arranged by Timothy Williams and supervised by Matt Walker. The show producer is Ray Coble.

Watch our full report and interviews from Disneyland in the May 30, 2013 episode of Orlando Attractions Magazine – The Show. The segment begins at the 11 minute mark:

Attractions - The Show - May 30, 2013 - Antarctica at SeaWorld, New Shows at Disneyland and more

If you can’t make it to Disneyland in person anytime soon, here’s a video of the full show:

Experience Solar Eclipse Day with one of...