Out of the Loop: Racing roller coasters in the news this week 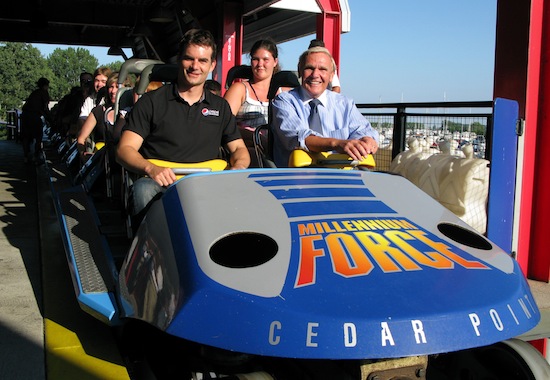 As the dog days of summer come to a close and the weather begins to cool down, racing in the major American circuits of Indy Racing League and NASCAR begin to heat up. Drivers begin to jockey for position to win a championship.

This week, I’m taking a look at racing associated news on the amusement/theme park scene over the past few weeks.

Sandusky, Ohio – NASCAR drivers have a reputation for being very fan accessible. One week a driver will appear at a local Ford or Chevy dealership, the next week he’ll show up at a Pepsi or Coke sponsored event. Two weeks ago, Jeff Gordon, driver of the #24 Dupont Chevy made a stop at Cedar Point in northern Ohio. Jeff Gordon is the 6th leading driver in career wins with 84 and has won four NASCAR Cup Championships. A limited amount of guests were able to purchase tickets and have a barbeque lunch with Gordon. This was followed by a presentation by Gordon. Guests at the park that day could sign up to ride the Millennium Force Roller Coaster along with Gordon. Those who signed up were also in the running for a prize package from the Michigan International Speedway and everyone received a $20 coupon for the NASCAR race at MIS that Sunday. MIS is less than 125 miles from Cedar Point.

The Millennium Force is the world’s first “giga-coaster”. This phrase describes coasters with hills peaking taller than 300 feet. The Millennium tops out at 310 feet. While the 90-plus mph speed of the coaster is well below NASCAR racing speeds, it was reported on the Cedar Point Blog that Gordon very much enjoyed the ride. 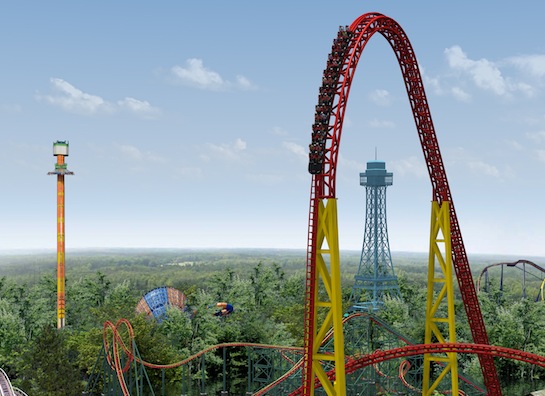 Doswell, Va. – Speaking of giga-coasters, Kings Dominion recently announced it would be opening the 2nd ever in North America. You’re wondering, “What is the racing slant here?” Well, the new coaster will be named the Intimidator 305. Yes, the coaster’s namesake is the late, great NASCAR driver Dale Earnhardt. The “305” then refers to the height of the coaster’s biggest hill. Cedar Fair, owner of Kings Dominion, will partner with the former driver’s company DEI (Dale Earnhardt, Inc.) to build the $25 million ride. The ride was designed by Intamin AG of Switzerland. Other notable coasters on their resume include California Screamin’ at Disney’s California Adventure, Fahrenheit at Hershey Park, and Millennium Force and Top Thrill Dragster at Cedar Point.

The Intimidator 305 will feature a ride speed of over 90 mph and track length of 5,100 feet. The ride will include a near vertical (85 degree) descent, six air-time humps, and three high speed banking turns. The ride cars will resemble Earnhardt’s famous black #3 car.

Interestingly enough, Carowinds in North Carolina, also a Cedar Fair park just announced that it will open an Earnhardt theme coaster in 2010. The “Intimidator” coaster will be B&M design and as such will be different than the “305”.

Nurburg, Germany – Let’s “shift gears” away from NASCAR and let’s talk Formula 1. Apparently in Europe, they like to turn their cars right in addition to turning left and have long curvy courses. For example, the Nourburgring, or simply “the ring” is one of the more grueling courses on the Formula 1 circuit. In fact, to just say Formula 1 underplays the fact that racing of many sorts occurs there most months of the year.

There is no amusement park in Nourburgring. However, there are many attractions and activities. This includes golf, museums, driving schools, mountain biking, cycling on the raceway, restaurants, and other activities. Now they have the fastest roller coaster in the world.

Let’s take a look at the previous record holders. The now #3 coaster is the Top Thrill Dragster at Cedar Point in Ohio. Built in 2003, it is described as a “stratacoaster” and designed by Intamin AG. It reaches a maximum height of over 420 feet. Most importantly, its top speed is 120 mph, and it reaches that speed in 3.8 seconds.

The now #2 coaster is Kingda Ka at Six Flags Great Adventure in New Jersey. This too is a stratacoaster built in 2005. It was likewise designed by Intamin AG. The maximum height is 456 feet. Its top speed is 128 mph in 3.5 seconds.

After a few month delay, Ring Racer is now open at Nourburgring. This S&S Power designed coaster reaches a height of 123 feet. While this is significantly lower than the past record holders, remember that the ride is meant to mimic a race car. There is no time in a race car that one would want to experience being vertical. Besides, what it lacks in height, it makes up in speed. The hydraulic launch system shoots riders to 134.8 mph in an astounding 2.5 seconds.

Disney purchasing Marvel – What will this mean for Islands of Adventure?