Out of the Loop: Ride Mandy, Mona and Manny Monorail at Disneyland 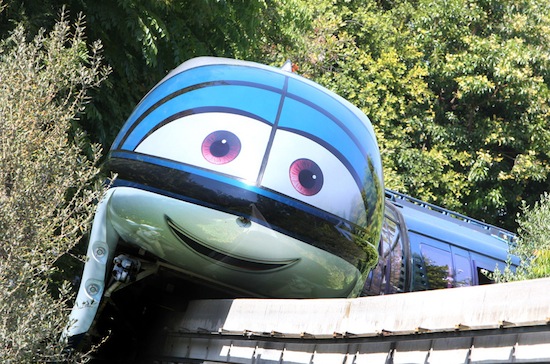 Anaheim, Calif. – In preparation of the grand opening of Cars Land at Disney California Adventure, there are three new characters gracing the Highway in the Sky across the way at Disneyland. The Monorails at Disneyland have undergone a transformation and now rather than Monorail Blue, Orange, and Red, meet Mandy Monorail (blue), Mona Monorail (orange), and Manny Monorail (red).

These new faces match the style of their movie star friends Lightning McQueen and Tow Mater. Oh, and these aren’t just pretty faces. Each has a personality of their own that will come through their voices you will hear while riding.

These little changes are just part of the vast number of improvements to the resort over the past five years. Disneyland Hotel has been re-done as well with refurbished rooms, a new pool and new restaurants. In Disneyland, the Matterhorn will re-open on June 15 with new cars and real mountain climbers. Disney California Adventure has essentially gone through a complete reset with Buena Vista Street, World of Color, The Little Mermaid, the new entrance, and the crown jewel of the re-imagined California Adventure, Cars Land.

Stay tuned to Orlando Attractions Magazine Blog for reports from the grand opening of Cars Land in mid-June.

2012 Hyperspace Hoopla, Dance-Off with the Star Wars Stars, one of the best, and sexiest yet – Video

How does the driver see out???

Most likely same dotted patterns that most lynx buses have on their advertisement buses.

I believe these are similar to wraps on the side of monorails at Walt Disney World in Orlando. If you’ve ever been on the inside, they are actually quite clear to see out of. As Eric indicated, they are like the wraps on city buses.