Phineas and Ferb to present summer version of ‘The Magic, the Memories, and You!’ projection show 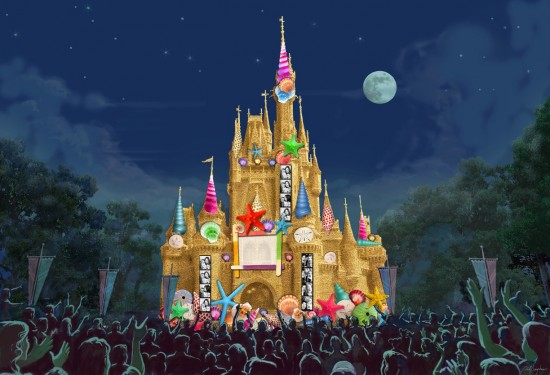 On May 25, the summer version of the Magic Kingdom’s nighttime show “The Magic, the Memories, and You!” will debut at the Magic Kingdom. Disney Channel stars Phineas and Ferb will kick off a rockin’ summer celebration that visits the beach, the jungle and under the sea with favorite Disney characters and cherished Disney music.

It follows the previous romance and Christmas updates, in which the popular projection show will receive a new sequence focused on summertime experiences. The castle will go through some dramatic, eye-filling transformations, from sand castle to ancient vine-covered ruin to colorful finger-painting to tropical aquarium. Characters featured in the summer sequence include Ariel, Sebastian, Goofy, Pumbaa, Timon and more.

As always, the show will feature more than 500 photographs taken in each park daily. Show times vary depending on park hours. “The Magic, The Memories, and You!” is included in theme park admission. The show will also take place on the “it’s a small world” attraction at Disneyland Park in California starting May 25.

This will mark the fourth variation of the show. Videos of the original, Valentines and Christmas versions can be seen below: