Photo Finds: A large update from the Universal Orlando Resort 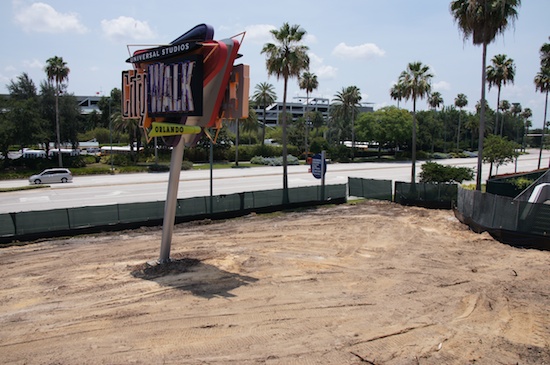 Over the last couple of weeks I’ve visited CityWalk, Islands of Adventure and Universal Studios a couple of times. Here are some new and different things I noticed. 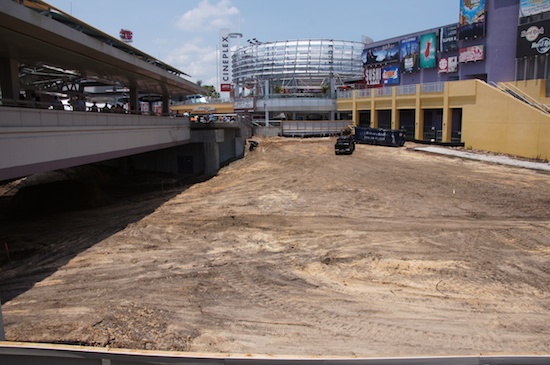 As you can see in the above two photos, land in CityWalk has been cleared for the construction of a 36-hole miniature golf course called Hollywood Drive-In Golf. As you can see, it looks like the courses will take you under the pedestrian walkway and out by the CityWalk sign. Click Here for more information about the new golf courses. 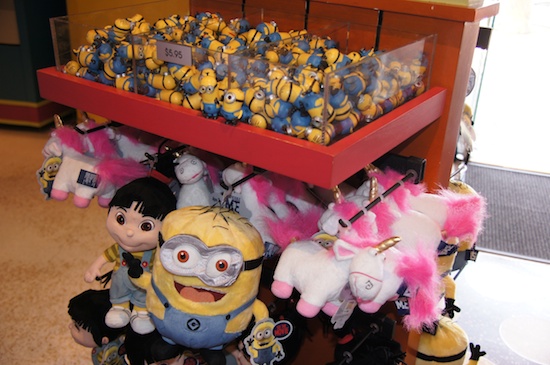 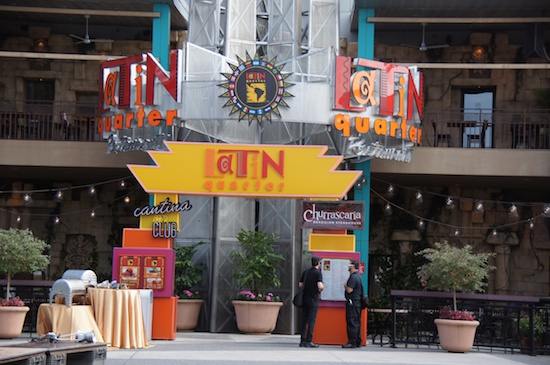 Although I haven’t tried it yet, the Latin Quarter restaurant is now also offering Brazilian style dining. Click Here to read all about it. 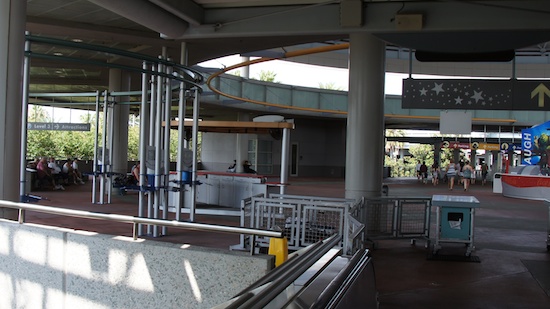 Usually there are a group of people here trying to get you to sign up for a Universal American Express credit card. They were noticeably absent. 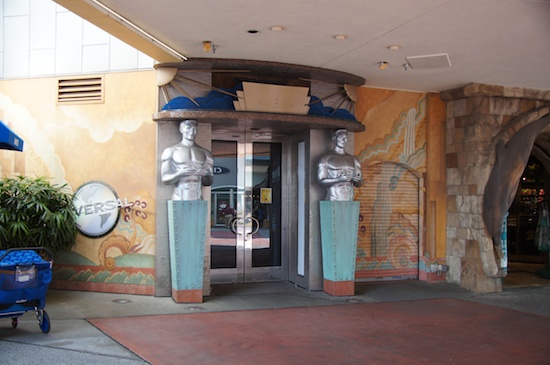 This area in CityWalk also housed an American Express service area. It’s closed with no word on what will be moving in. 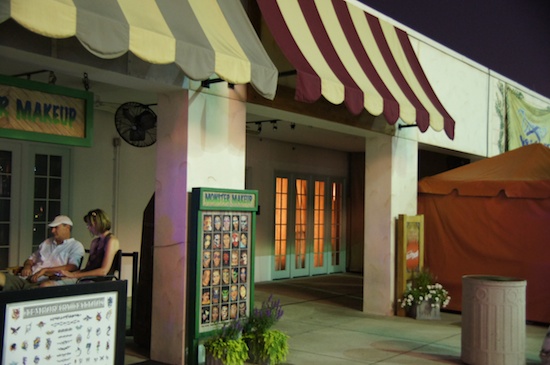 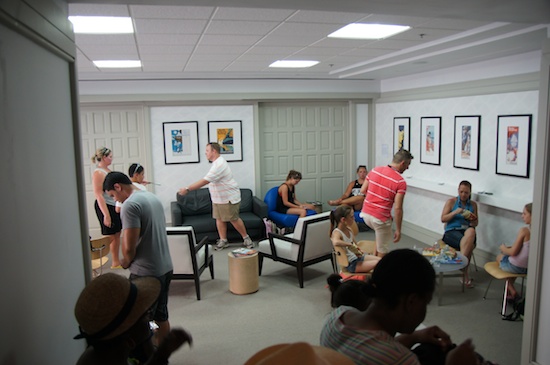 Here’s a peek inside. It’s an area where certain American Express cardholders can relax, charge up their electronics and have something cold to drink. Click Here for more details. 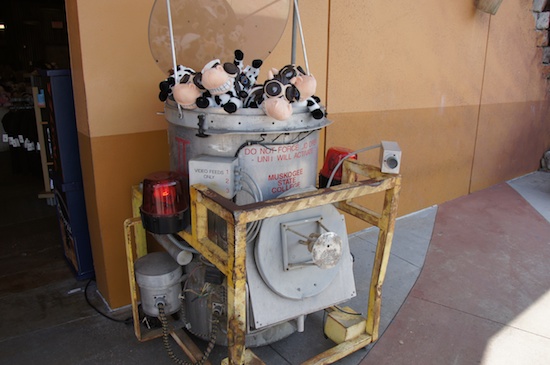 Having recently seen the movie again, this Dorothy II prop caught my eye outside the Twister gift shop. 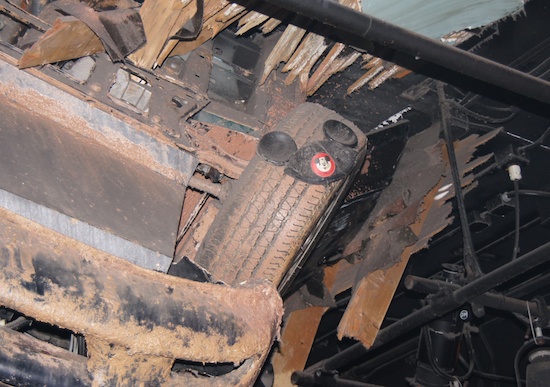 Inside the Twister queue is a Hidden Mickey. That’s right, a Hidden Mickey. This car is suspended on the ceiling with this tire spinning fast so the Mickey ears are hard to see, but my flash and a little luck froze it for this picture. 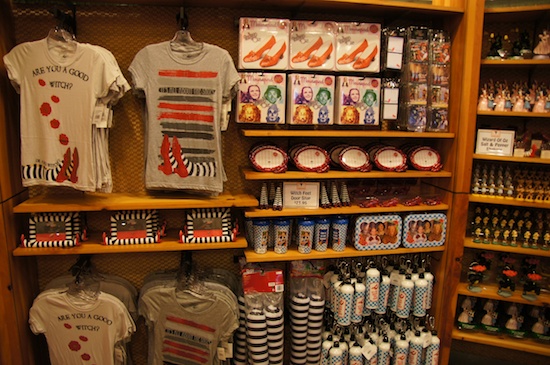 The Twister gift shop now features quite a lot of Wizard of Oz merchandise. Between the Mickey Ear Hat and Wizard of Oz, which is also featured in the Great Movie Ride at Disney’s Hollywood Studios, there’s quite a bit of crossover between the two competing theme park companies. Which leads me to… 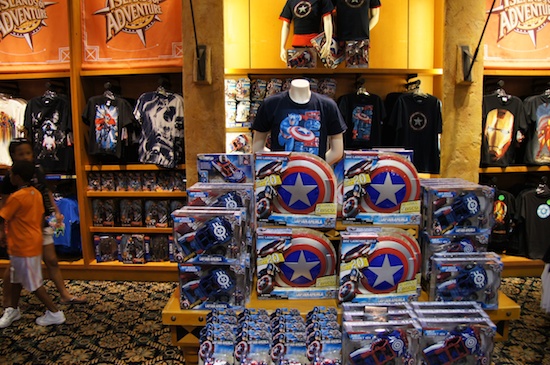 The Universal stores all around the resort are featuring lots of Marvel merchandise, like this Captain America display. You can also find displays like this in many Disney World stores. Of course Marvel is owned by Disney, but Universal has a contract to use and promote some of their characters. Speaking of, Click Here to see the new costumes the walk-around characters in Marvel Super Hero Island recently received. 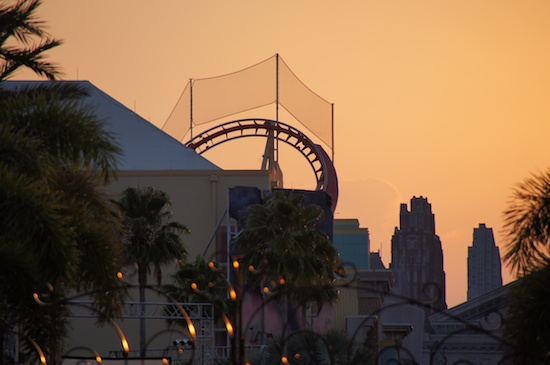 This netting by the back part of the Rip Ride Rocket coaster didn’t used to be there. I guess some things were flying out of rider’s pockets near people walking below. 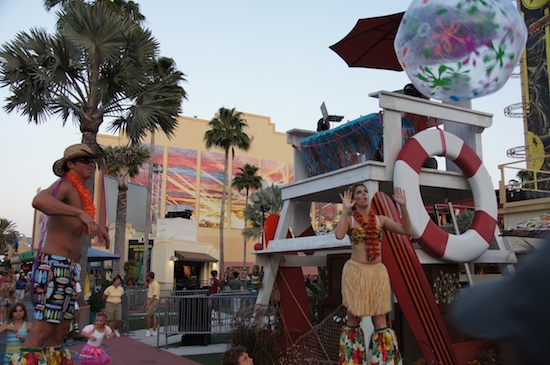 There’s a DJ and a couple of stilt walkers in bathing suits outside the Music Plaza in promotion of Universal’s Summer Concert Series. Click Here to find out who’s playing each Saturday. 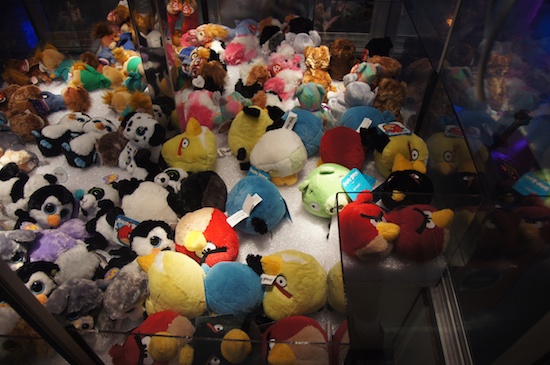 I spent a couple of dollars in the arcade by the Mummy ride trying to win some Angry Birds. Don’t bother trying, they’re too heavy for the claw to hold onto. I later won a couple of them at Chuck E. Cheese’s. The Endangered Species store in CityWalk is selling a few different Angry Bird T-shirts. I also saw Angry Bird plush figures for sale in a shop at the Orlando airport. 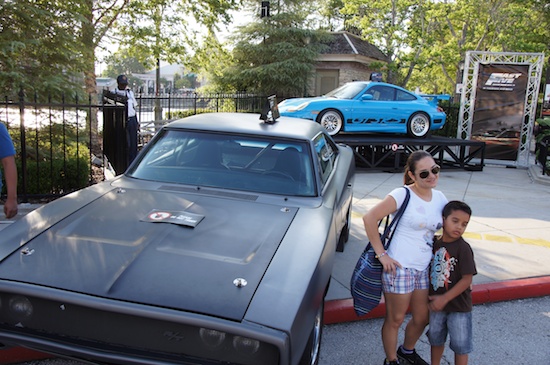 Some cars from the most recent Fast & Furious movie are on display near Mel’s Drive-in. 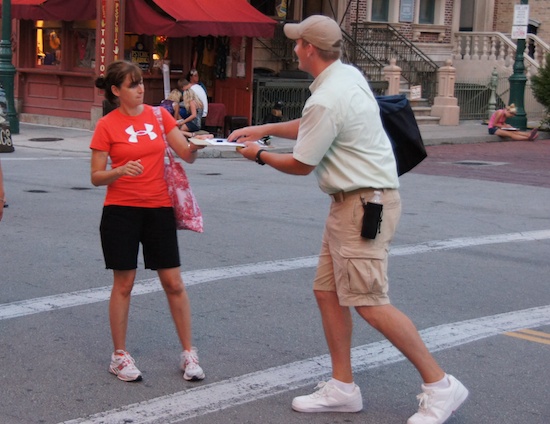 On a recent Saturday night, the night of the Summer Concert Series, Universal had a bunch of team members asking guests to fill out a survey. It’d be so much easier to do if they had them on iPads or something similar. 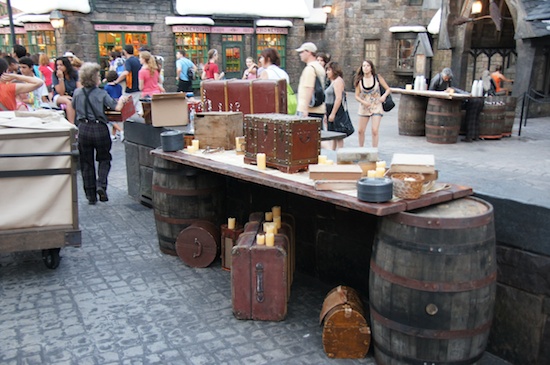 There must have been a special party on a recent night in the Wizarding World of Harry Potter. They had this area set up for food and were wheeling a huge big-screen TV into the area as closing time neared. 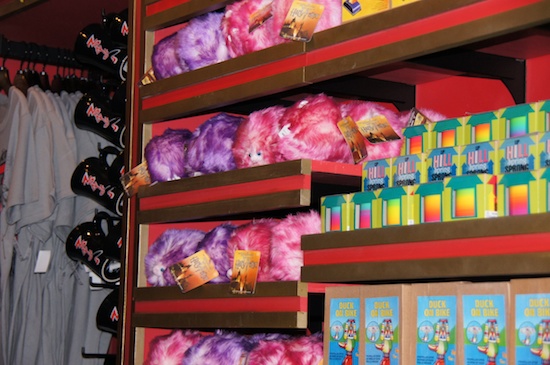 Zonkos store in the Wizarding World is now selling purple Pygmy Puffs in addition to the pink ones. 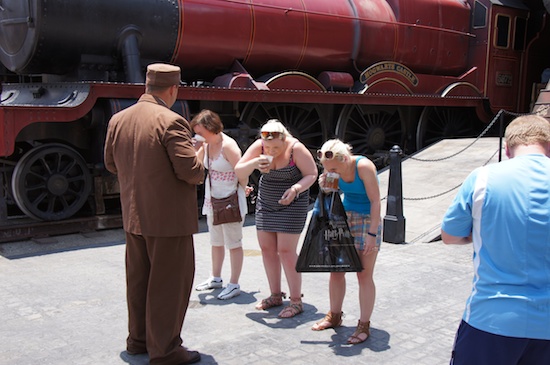 I’m not sure what sort of game the Hogwarts Express train conductor was playing with these guests, but he had them sticking their noses in their Butterbeers and leaving them there. The conductor was a part of the recent one-year celebration in the Wizarding World. Click Here to see the festivities. 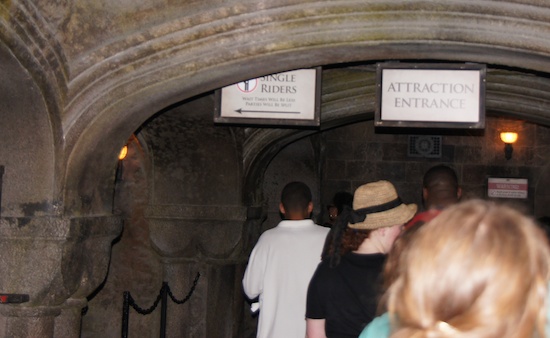 It used to be sort of a secret that there is a single rider line for the Harry Potter and the Forbidden Journey attraction, but now they’ve added a sign. Although I don’t think everyone will notice it. 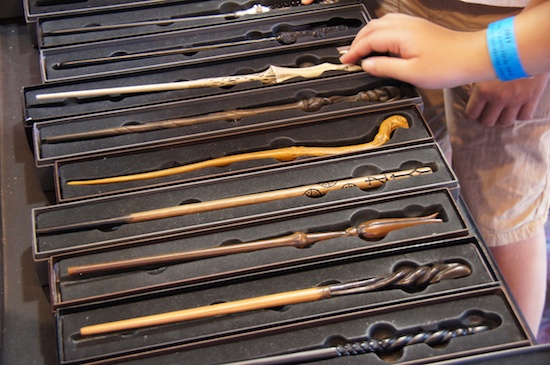 I was told a few of these wands in the middle of the photo are pretty new to the Wizarding World. 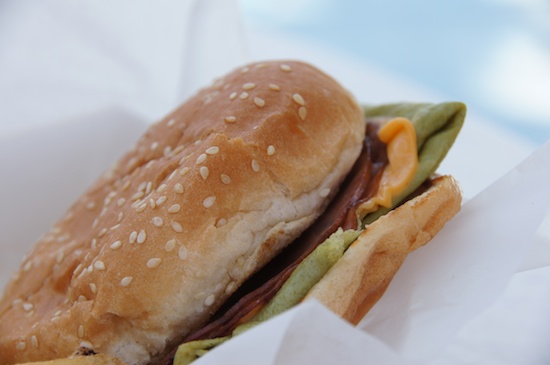 We were surprised to see the Green Eggs and Ham food stand open. Since it’s rarely open, we had to purchase a green eggs and ham sandwich. One of our followers on Facebook, Barry Rose, said he used to work at Universal and they colored the eggs using powdered spinach instead of food coloring. 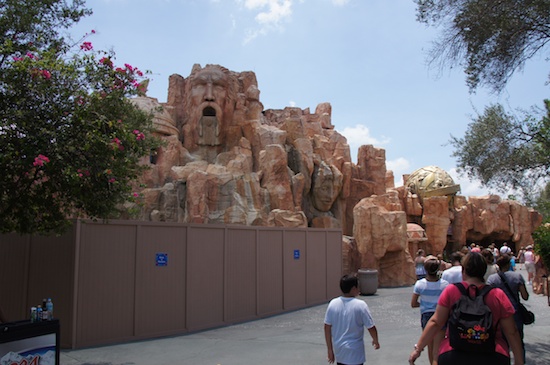 It looks like they’re refurbishing the outside of Mythos restaurant. 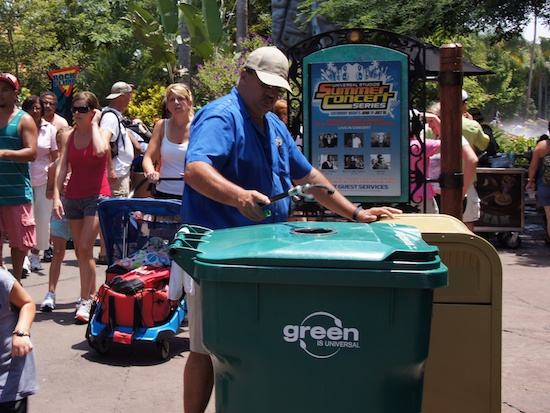 I was happy to see Universal’s custodial staff was pulling all the plastic bottles out of the trash cans before emptying them. 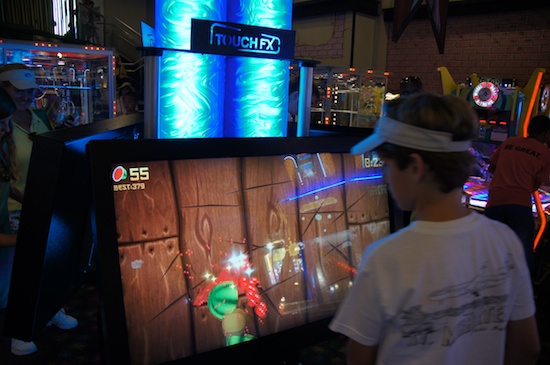 Islands of Adventure’s arcade had some cool new games, including this big-screen version of Fruit Ninja. I wanna see a large version of Angry Birds make it into the arcades. 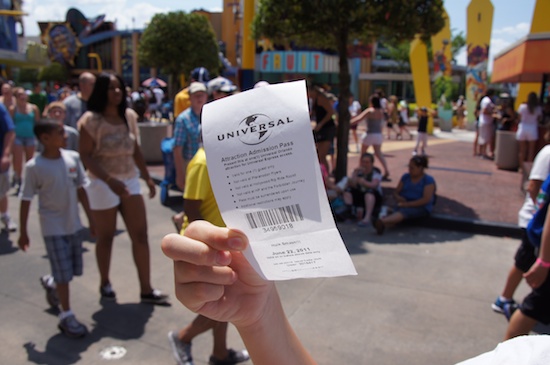 Universal released an offical app for mobile phones yesterday. (Click Here for more information and a link to the app.) In the app, you can check-in to different locations. If you check into certain ones, you can receive a prize. Once we did all the required check-ins, a screen came up that said we won and to show our phone to someone working at certain stores. One of the stores listed was the Marvel store on Super Hero Island. Of course, since it was the first day the app was released, no one in the store knew anything about it. One section of the app listed certain stores to get our prize, and another section of the app listed different stores. The Marvel store manager told me they must have been listed by mistake because they didn’t have the coupon book I won. But a nice team member working at the store gave us a couple of passes to skip the line on a ride of our choice. 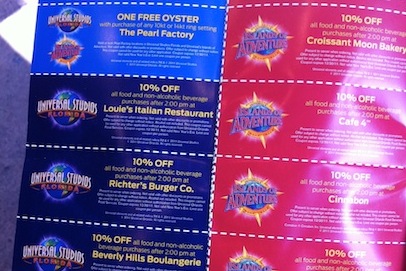 I finally got the coupon book in the main Universal store in the park. But as a passholder, most of the 10% off coupons don’t mean too much to me, as I already get 10% or 20% off those locations with my pass. But there are some “buy something, get something free” coupons I may use. Someone on Twitter told us anyone can get the coupon books for free just by asking, but we haven’t confirmed that. I think a better prize would be the skip the lines passes. 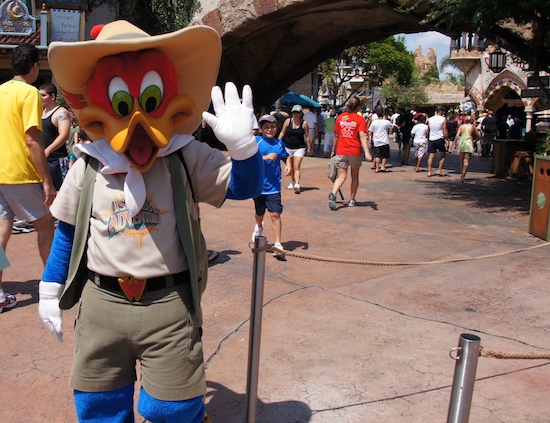 We’ll end this long update with a wave from Woody Woodpecker, who we passed on our way out of Islands of Adventure.

Does anyone know if Universal Studios is going to bring back Universal 360 this year for the summer? I haven’t seen anything on the website?

Whatever the reason these printable coupons or “Printapon” exist and it is valid to use them, although it can skew the marketing research for which they were intended.

The netting seen in the photo at the curve of Hollywood Rip Ride Rocket has been there awhile. Since approximately the weekend of November 22, 2009. The attraction soft-opened mid-August 14, 2009.

Thanks for the correction Don. I often notice things in the parks that I don’t remember seeing before. But it turns out just to be something that never caught my eye.

Michael, I know they’re bringing it back for the Fourth of July. We’re not sure about other dates yet.

Very good, enjoyed looking at all the photo’s!

Who Saw The Hidden Mckey outside the Twister line area?

Yesterday, while I was at work, my cousin stole my apple
ipad and tested to see if it can survive a forty foot drop,
just so she can be a youtube sensation. My iPad is now destroyed and she has 83
views. I know this is totally off topic but I
had to share it with someone!