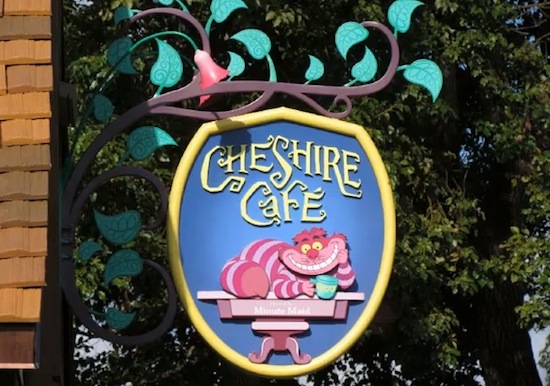 We have a lot of updates to get to this week:

• Holiday decorations up at Magic Kingdom
• Posters down at Toontown train station; new structure visible
• Cheshire Café replaces Enchanted Grove; keeps menu
• Fantasyland Construction pics: themed bridge visible outside Under the Sea; trees now clumped to prevent view of Seven Dwarfs Mine Train from Pinocchio Village Haus
• Haunted Mansion extended queue got several new directional signs
• New Sorcerer’s location (with dual cameras) near re-opened Frontierland Shooting Arcade
• Sleepy Hollow Refreshments has new waffle sandwiches ($7); the sweet and spicy chicken was divine (and filling)!
• Holiday interlude in the castle projections include decorations as: wrapping paper, Christmas lights, candy canes, the cake castle from 1996, and gingerbread house.
• RFID entrance tested at Epcot; you get a sticker on your existing pass or ticket and swipe it; there is no actual turnstile anymore.
• New (new-ish?) pig family decorations at Great Piggybank Adventure; most are animated cutouts
• Canopy of lights at San Francisco Street in Osborne is the big innovation this year; programmed and bright, it looks and acts like the Fremont St Experience in downtown Las Vegas.
• Two tributes to the recently-departed Jennings Osborne: one blue angel in the sky is now white; and a razorback pig (he was a big football supporter) outlined in lights.
• Festival of the Masters was this weekend at Downtown Disney
• New World of Disney bathrooms; now not accessible from inside the store, and only from the side of the building
• Earl of Sandwich has holiday sandwiches again; the ‘toy ornament’ tree outside has no toys this year
• Blink by Wet Seal now open; replaces Magnetron in DtD
• Sunglass Icon store in DtD renovated and open; has a station where you can photograph yourself and tweet/upload the pic immediately
• Something Silver now open; replaces Magic Masters in DtD
• Roar and Soar annual event (boats, cars, bikes, and of course planes): report from Fantasy of Flight, where they have a new ropes challenge and zipline.
• Visit to Character Warehouse at outlets; Disney’s overstock store

Disney or Grand Canyon? A comparison

Just wanted to let you know that I really enjoy your posts. I don’t get to Florida as often as I would like as I live in the uk and tour blog helps keep me up to date with what is going on in the parks and let’s me plan for my next trip.

where is the character mall

The Character Outlets are in the two Premium Outlets in Orlando.

Are boarding groups and virtual queues a...