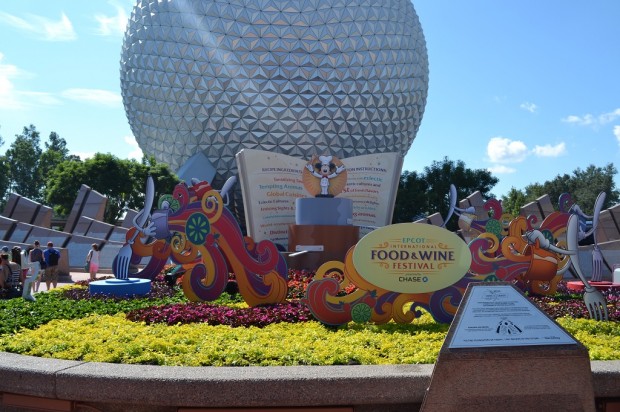 Just in case you missed the enticing smells while walking by Spaceship Earth, the tastiest event at Epcot is going on right now (through Nov. 11). This past weekend, I grabbed a fork (or five) and dug into all that this year’s International Food and Wine Festival had to offer.

The entrance display (above) features a new take on the broom scene from Fantasia. Replacing the brooms are forks. The swirling liquids are a common theme in much of this year’s merchandise and decorations. Oh, and don’t forget about Chef Mickey, who traded in his wand for a wooden spoon. 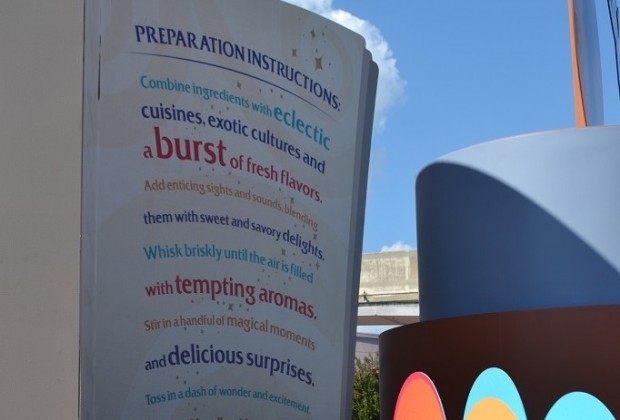 A closer look at the right side of Chef Mickey’s cookbook. 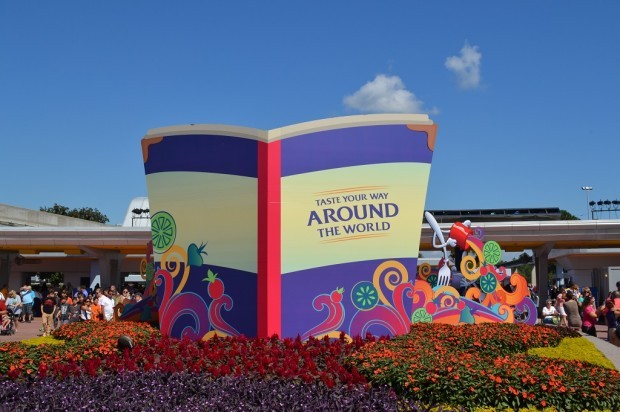 And the backside of the cookbook. 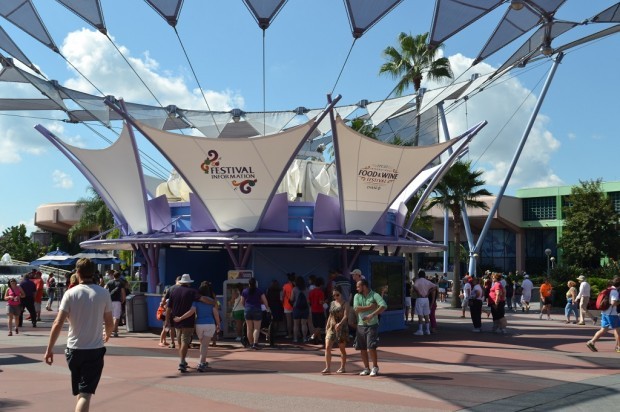 The Festival Information station is a fitting place to start your journey. Grab a map and ask all of your questions to the cast members. 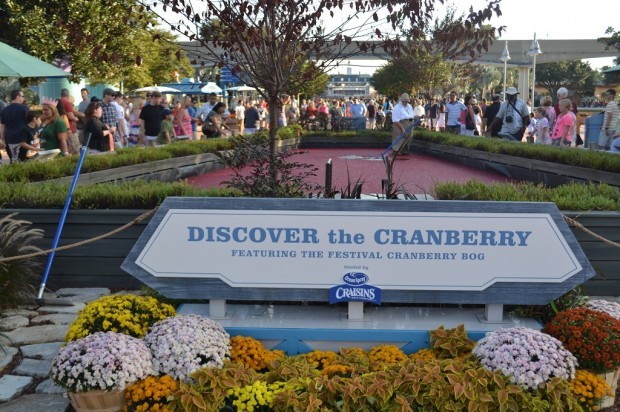 On your way to the World Showcase, stop by the cranberry bog, which is just behind the fountain. I’m not sure if someone is always tending to the bog, but when we passed by, a woman was in there answering guests’ questions. 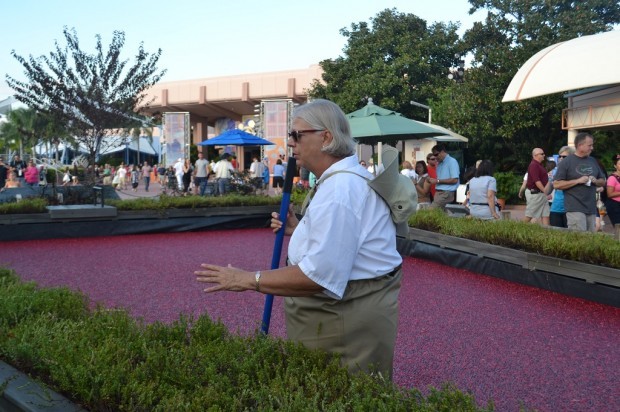 As you make your way around the bog, read some of the educational tidbits about cranberry harvesting and enjoy the festive color. 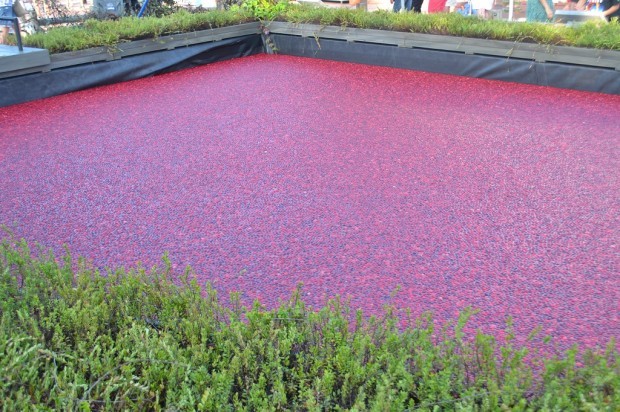 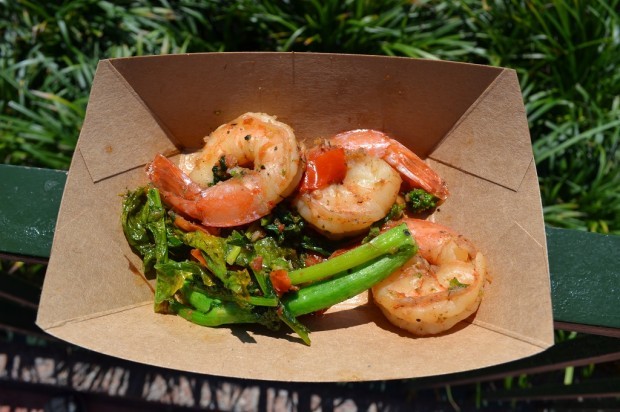 Onto the food! My first stop was Australia, where I tried the Garlic Shrimp with Roasted Tomatoes, Lemon Myrtle, and Rapini. Being a Floridian, I eat shrimp often and thought these tasted overcooked. Plus, the garlic did not come through very strong. The main draw to this dish was the rapini, as I had never heard of it before the festival. The leafy parts were alright, but the stem was so bitter that I could only take one bite. Needless to say, this was not my favorite dish of the day. 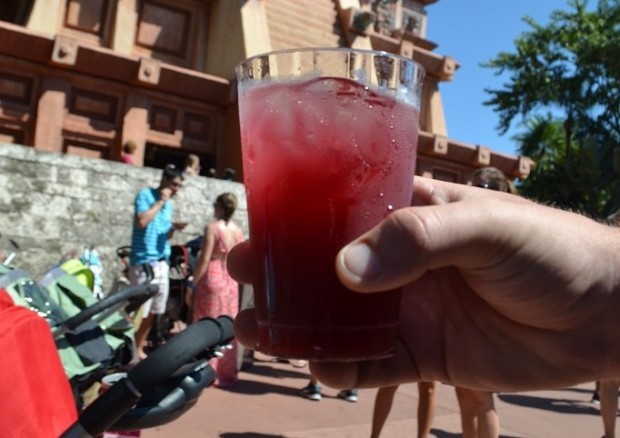 The sangria in Mexico was a refreshing welcome on the hot, sunny day I was there. Sangria is one of my favorite drinks and this one did not disappoint. 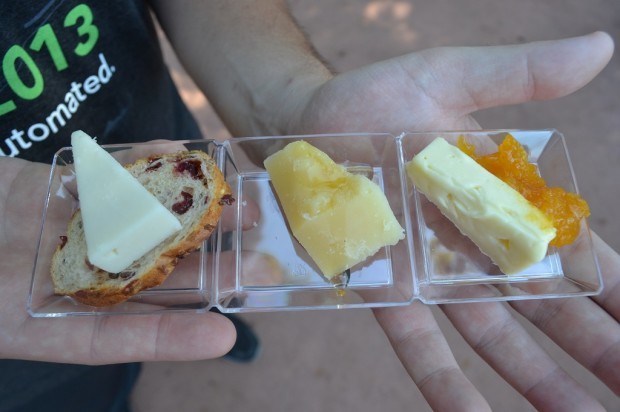 The dish I was most looking forward to trying was the Artisan Cheese Selection from the cheese station. This selection features Flagship Reserve Cheddar, La Bonne Vie Triple Crème Brie, and Wijngaard Goats Gouda. The cheddar (middle) was drizzled with honey. The saltiness of the cheddar paired with the sweetness of the honey was delicious. I wasn’t a huge fan of the brie (right). I love salt, but this cheese was almost too salty for me, and that’s saying something! I didn’t like the pairing with the apricot preserve and the texture reminded me of butter. The clear winner was the gouda (left). Maybe I’m just used to eating cheese with something crunchy, but the cranberry cracker it’s served with is almost as good as the cheese! 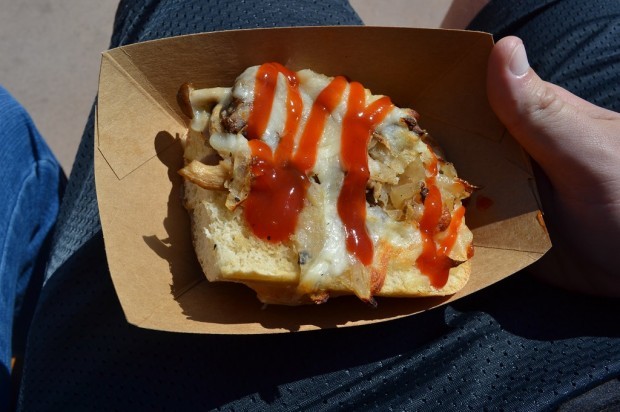 A dish with more cheese was next in Poland. Zapiekanki, which I surprisingly pronounced correctly, is cheese bread topped with toasted mushrooms, caramelized onions and ketchup. This dish was mediocre. The mushrooms were great, but the bread was packed with far more onions, which overpowered the mushrooms. The ketchup is freshly made and spicy. Although I didn’t like the ketchup very much, the dish would have been very bland without it, so it was necessary. 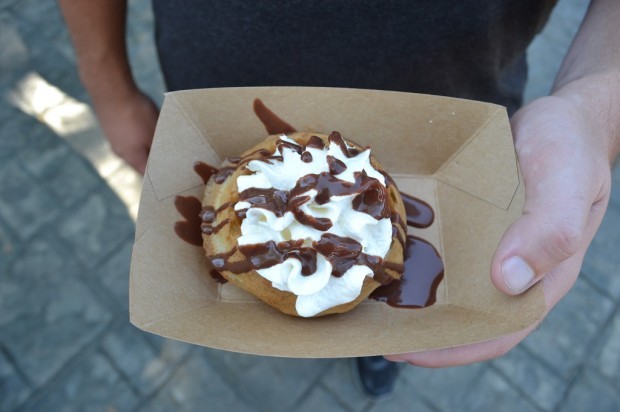 The best part of the Food and Wine Festival? You not only can eat dessert whenever you want, but you can eat it as many times as you want! My first taste of dessert was in Belgium. There are a few waffles to choose from at this stand, but I chose the one with chocolate ganache and whipped cream. It was as delectable as it looks. It reminded me of a lighter version of a funnel cake. I want to come back and try the berry version of this waffle next time. 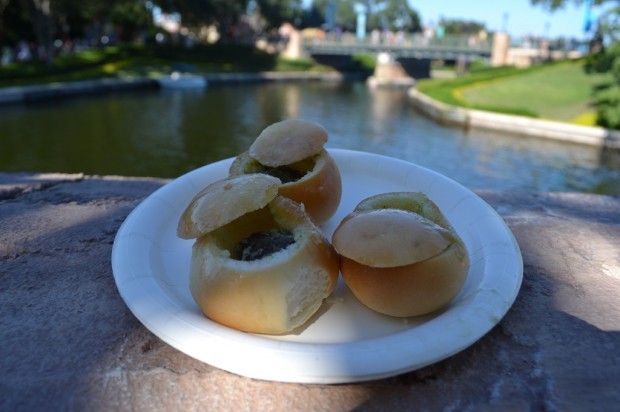 Onward to my second favorite dish of the day: the escargots from France. These parsley snails are served in brioche that’s brushed with a buttery, garlic spread. Unlike the shrimp from Australia, there is no mistaking that garlic is a main ingredient in this dish. It may have been even a little too dominant, as I felt like I couldn’t taste the snails as much as I should have been able to. The brioche made this a very minor complaint, though. 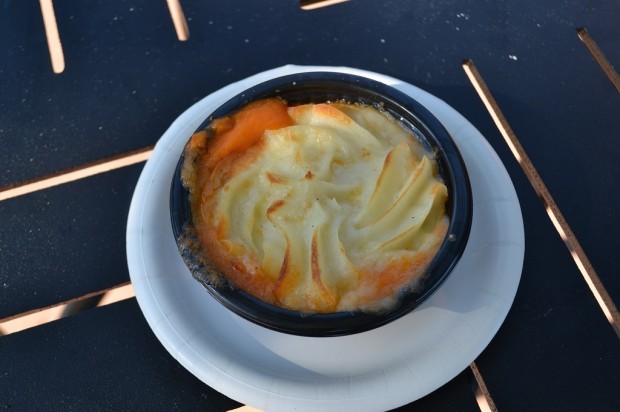 Fresh off of my seafood high, I headed to Ireland for a fisherman’s pie. I was kind of disappointed in this dish. I expected the lobster and seafood flavor to be evident and it just wasn’t there for me. It felt like I was eating mashed potatoes (don’t get me wrong, they were good) with gravy containing tiny pieces of seafood. This is a very cozy dish, so I could see this being much more appetizing during the winter in Ireland, but during 80-something degree, humid Florida weather, it doesn’t warm your belly in as comforting a way. 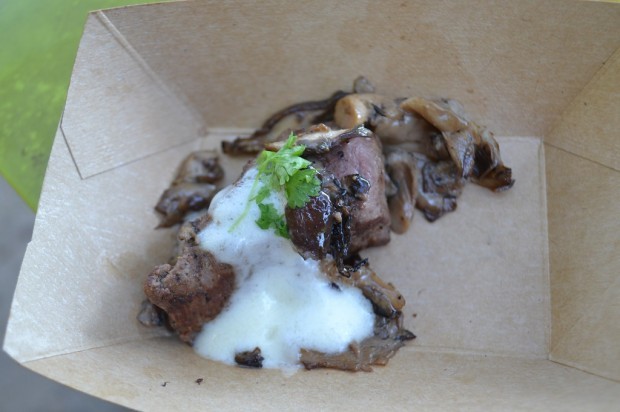 The next stop was Canada, where I enjoyed my favorite sample of the day. Everything about the filet mignon was perfect; the wild mushrooms, the meat itself and the truffle butter sauce. Even though these samples are massed produced, the piece of meat I got was cooked perfectly. I’ve never eaten at Le Cellier, but this was some of the best advertising there could have been. Don’t miss this! 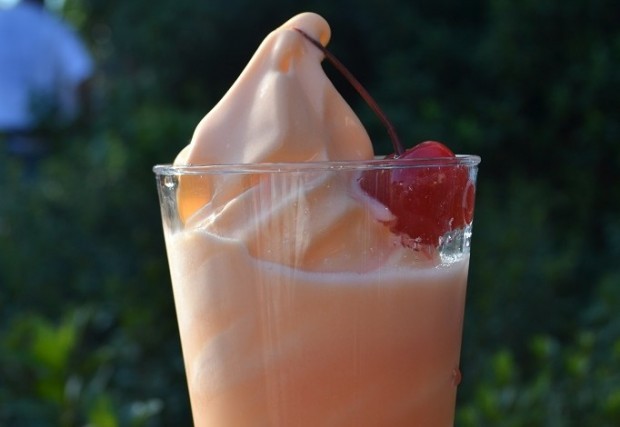 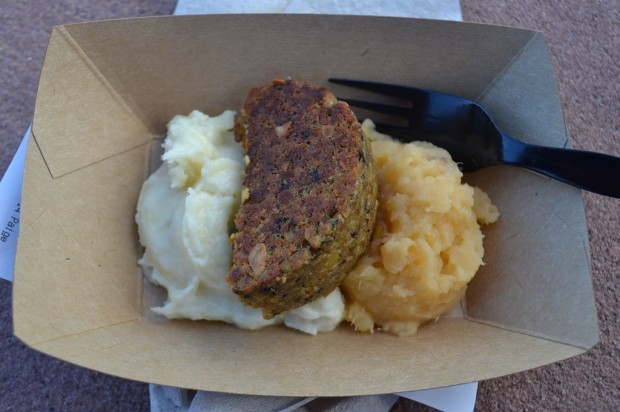 Last, but certainly not least, was the dish I had been waiting to try all day: Haggis. This is a vegetarian version of the traditional Scottish meat dish. While I still want to try the meat variety someday, I was excited to cross haggis off my to-try list. I wasn’t as excited eating it, though. Dry is the best word to describe it. It isn’t very flavorful, either, and the texture wasn’t appetizing. The saving grace of this dish is the rutabaga, which is sweet and reminded me of mashed sweet potatoes. The mashed potatoes aren’t bad, either. Give haggis a try, though, because, really, where else can you order it?

That’s it from my first trip around this year’s Food and Wine Festival. I’ll be back again soon to taste and sip more of what this year’s countries have to offer. What was your favorite this year?