Universal’s Islands of Adventure is currently making a different kind of magic with the construction of a brand new Harry Potter-themed family roller coaster. 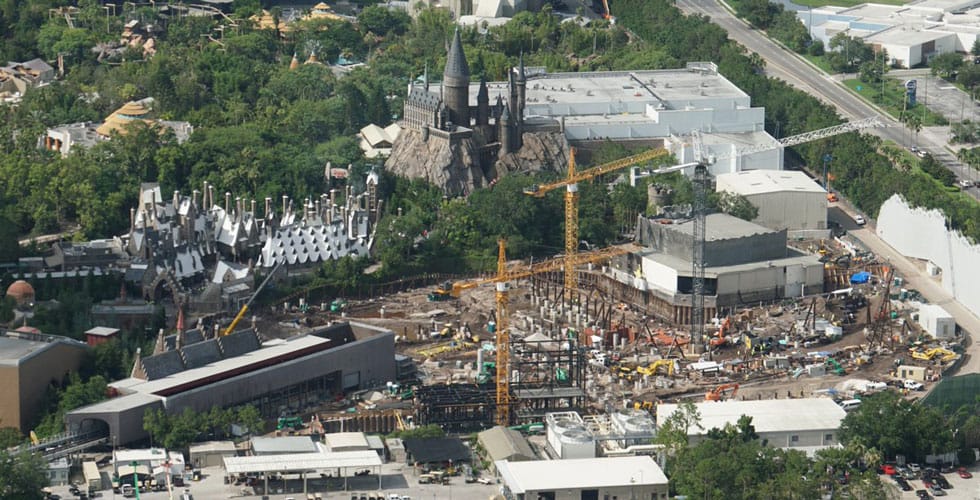 A look at the construction zone for the new coaster.

This photo report, with shots provided by our contributor, @bioreconstruct on Twitter, oversees the current construction going on at the Wizarding World, along with rumors of what exactly could be on the way to Hogsmeade. 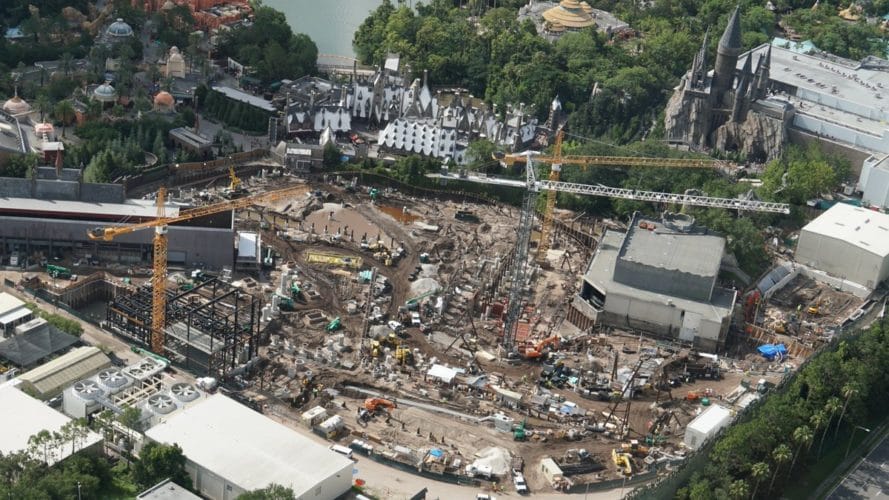 First off, this coaster is going to be big. Very big.

Guests who have visited the Wizarding World before can compare this area to that of the white show building for Harry Potter and the Forbidden Journey on the far right. To give more perspective on the location, the long, rectangular building on the left is where guests arrive on the Hogwarts Express. 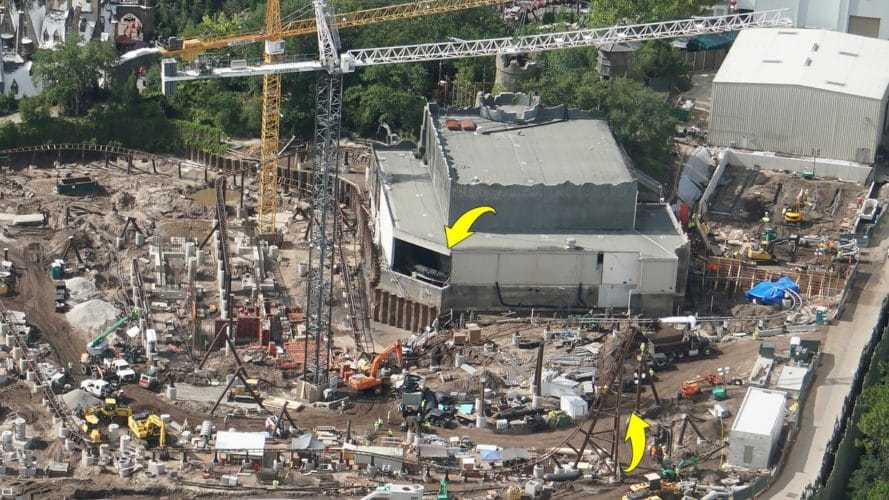 The center arrow above points at the first piece of track that was ever seen in the construction. One guess is that this will be the last turn guests will take indoors, before heading outside to the track at the top of the photo. This will then launch them towards the long straightaway on the left by the two large crane foundations.

The second arrow on the bottom right points to what could be a dead-end track, comparable to Expedition Everest at Disney’s Animal Kingdom. 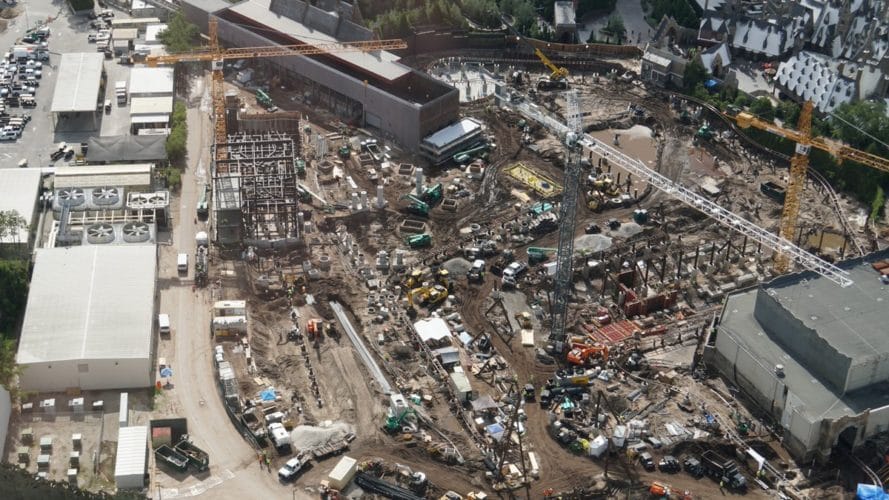 This photo is another overview of the track, and features the newest show building on the left. You can also get a look at the dead-end track here in the bottom center of the shot, with the long track path leading toward it.

It is unsure if this section of track is a dead-end, as it could take a sharp right turn to connect with the low-lying track on the left going into the show building. This seems like a bit of an extreme maneuver for a family-focused coaster. 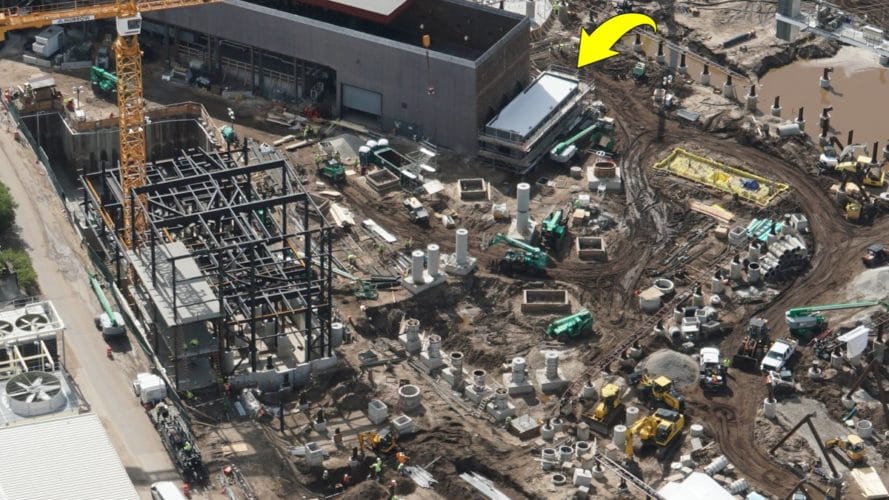 The skeleton of a show building on the left hides two connected tracks. Some are speculating that this is a drop track or elevator system, similar to Transformers: The Ride at the Universal Studios Florida, or Cobra’s Curse at Busch Gardens Tampa Bay.

The dual tracks would allow for more elevators or drops, and therefore, more ride vehicles going at one time. The arrow above points to a new structure built a few weeks ago. It may be the same type of building as the new yellow one to its right. 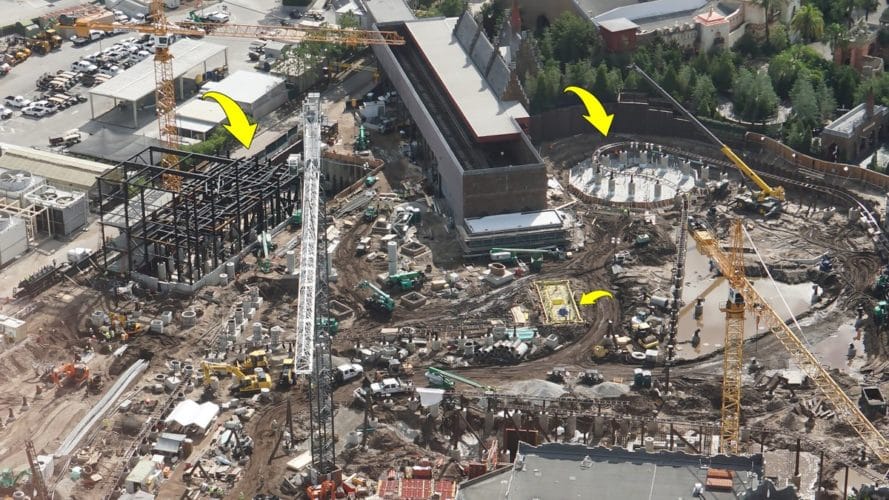 A change of angles showcases another look at the elevator or drop-track show building on the left. New foundation work is happening on the yellow rectangular area in the middle.

The last arrow points on the right to an interesting foundation and track layout that could give away a part of the ride. The strong foundation, and lack of extreme banked track could hint that this is the last majorly-themed section of the ride. This turn may feature a significant animatronic, like Hagrid’s pet spider Aragog. 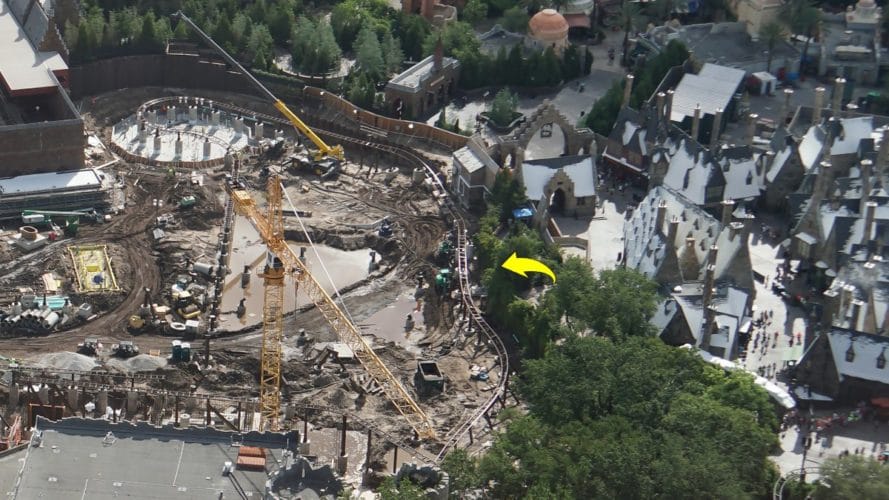 After the large turn with the possible animatronic encounter, guests will most likely gain speed again and be taken for one last trip through the woods around Hogsmeade. This will then take guests back to the largest show building for the end of their journey. 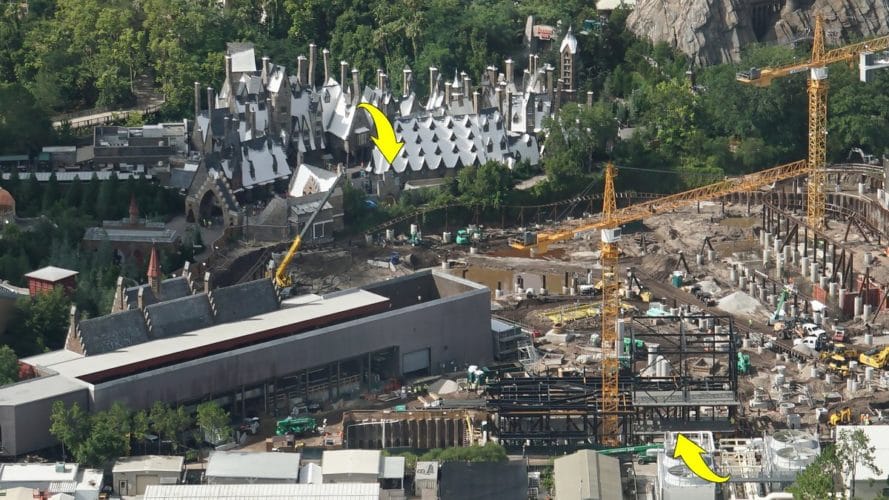 Here is a secondary view of the those banked hills passing by Hogsmeade marked by the arrow on the left, along with another view of the elevator or drop track show building on the bottom right. 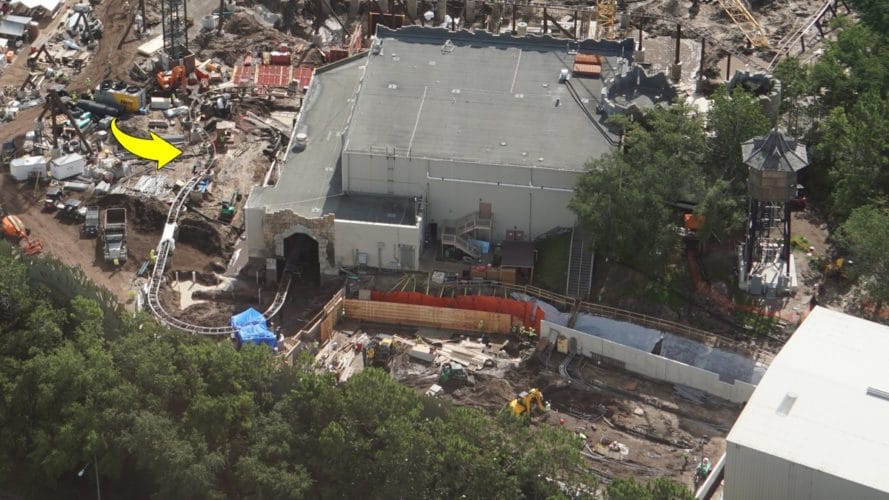 While it isn’t confirmed, this looks like the kind of track layout you would expect for the ending of a ride. The smaller banked turns lead to a slow return into the show building. The blue tarp is laying over a fork in the track that will allow coasters to be stored in a maintenance building. 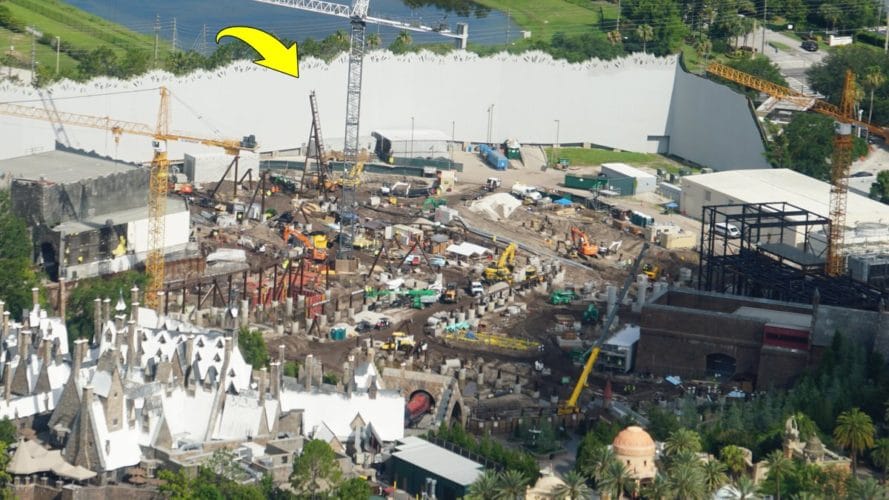 Previous speculation led people to believe that this may be a hanging coaster. This now seems impossible upon viewing the track pieces and layout.

Another speculation was a motorcycle-style vehicle with a side car, like the one Hagrid drives in the films. While this would be a fun ride vehicle, the trouble with getting guests on and off, along with some of the extreme elevations, would make this unlikely.

In my opinion, I expect a ride vehicle very similar to that of the Revenge of the Mummy roller coaster at Universal Studios Florida. Universal has been in a phase of copying rides, and this new attraction may follow suit.

Skull Island: Reign of Kong and Fast and Furious: Supercharged have nearly identical ride vehicles, and a similar pace for the ride overall. The same goes with The Amazing Adventures of Spider-Man attraction and Transformers: The Ride.

This style of ride vehicle allows for a high capacity of guests, while still allowing for sharp maneuvers and quick changes in track. This kind of attraction is also a long-lasting fan-favorite with its practical effects and big thrills.

All of this is complete speculation though, and until confirmed by Universal Orlando themselves, we cannot be sure what exactly this new attraction will be like.

For now take a look at the roller coaster previously located at Hogsmeade, Dragon Challenge, along with some other footage from the Wizarding World of Harry Potter: