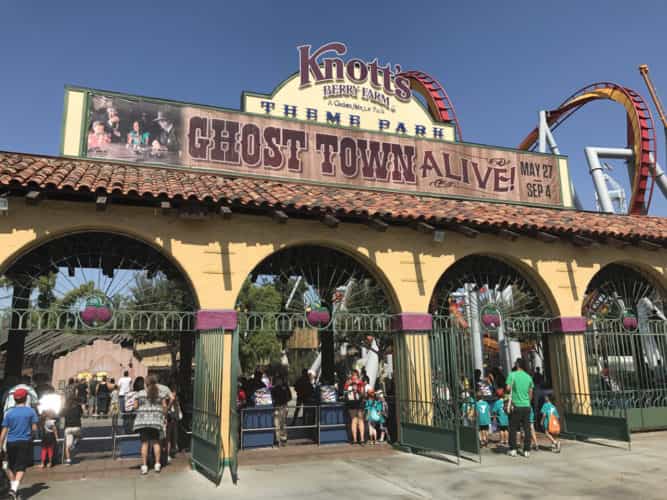 Although we’ve been reporting on Knott’s Berry Farm theme park for years, I recently had my first visit, along with my son Quinn. Here’s a bit of our fun day.

If you don’t know, Knott’s Berry Farm is less than 30 minutes from the Disneyland Resort in Buena Park, Calif. It’s actually older than Disneyland. Without going into the whole long history, Walter Knott was a berry farmer whose wife ran a fried chicken restaurant that got so popular, people were waiting in every long lines to enter. So Walter built some attractions around it to give the families of those waiting in line something to do. It grew from there into the large theme park it is today. 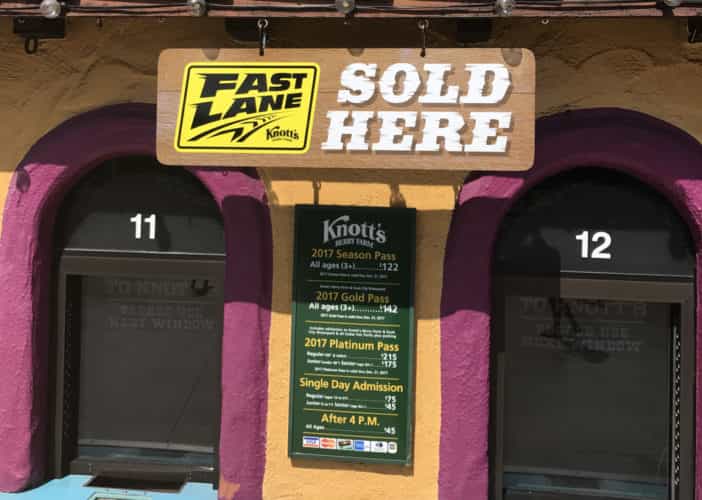 We arrived in the morning and picked up our tickets (generously provided by Knott’s). As you can see, a day ticket is $75 and they offer an After 4 p.m. ticket for $45. They also offer Fast Lane, which is the name of their service to skip the lines. We were also provided these and they helped on some rides, but they’ll set you back between $60 to $70 per person. Keep in mind they don’t work on all attractions. 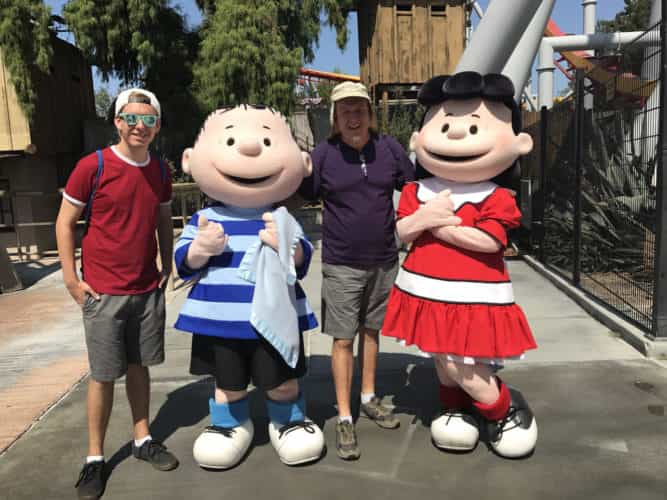 As we entered the park, the Peanuts characters were out meeting guests. Guests can also meet them later in the day in the Camp Snoopy kids area, which is where we saw Snoopy and Woodstock. 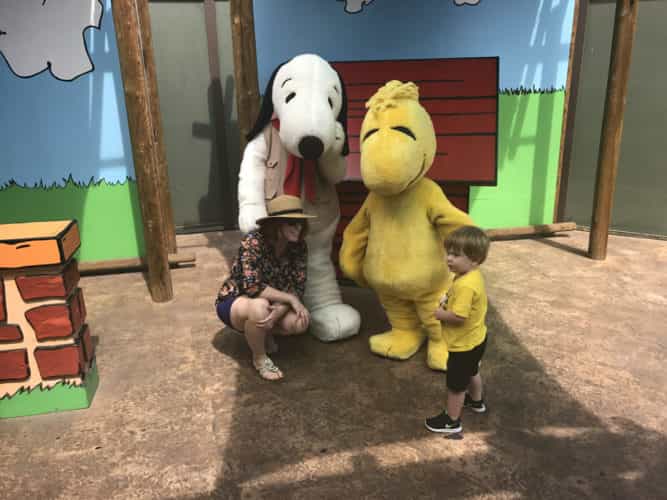 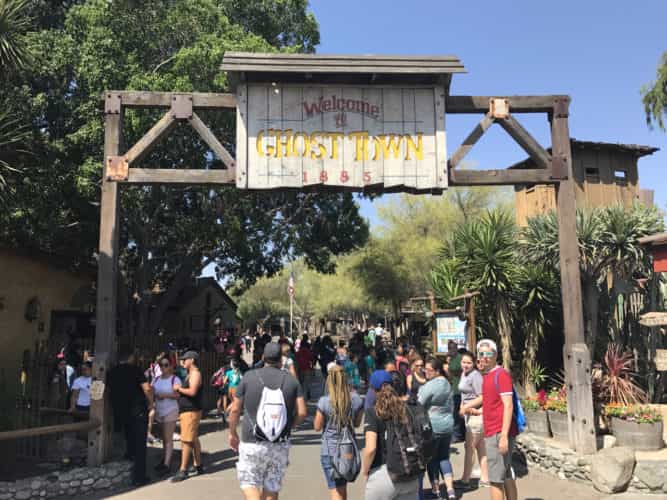 We were both excited to visit the Ghost Town area. Although this area is there year-round. They’re doing a special event this summer called Ghost Town Alive. Basically it’s turned into an interactive area with many Western characters roaming and speaking with guests. 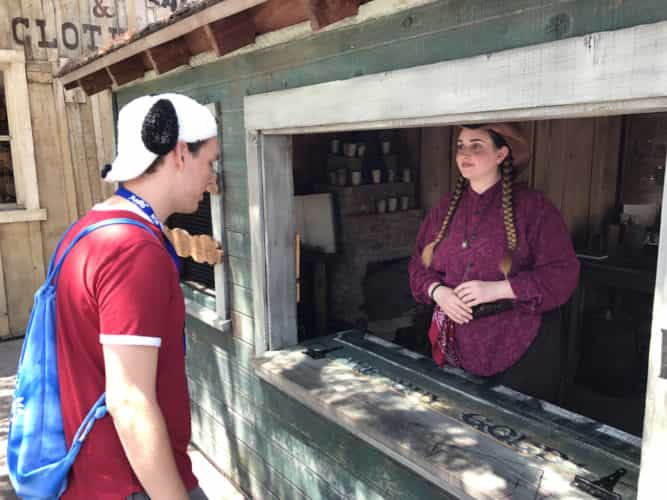 We heard we could talk with the town’s residents and they may give us different tasks to do, so we could play along in the storyline. So we went into a few shops and spoke with a few of the townspeople and sure enough, we were given the task of fetching a package for someone at the post office. 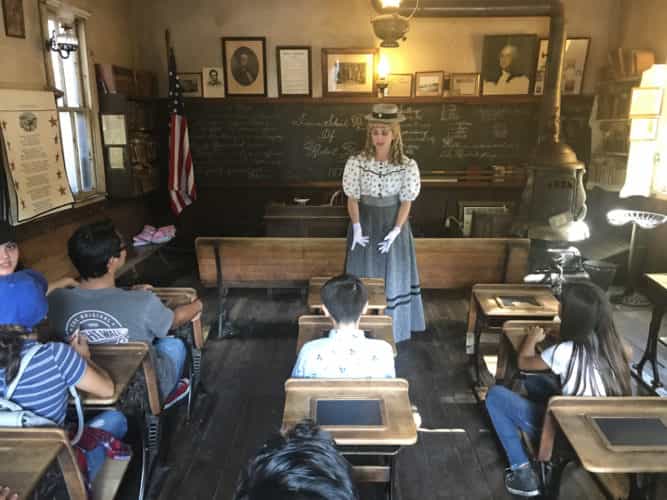 It was fun. We saw some guests sitting in a schoolhouse listening to a teacher, and others playing cards with the sheriff. There’s even a salon where you can sit and have a Boysenberry soda while you watch a show. We could have spent most of the day here alone, but we wanted to get on some rides and see the rest of the park. 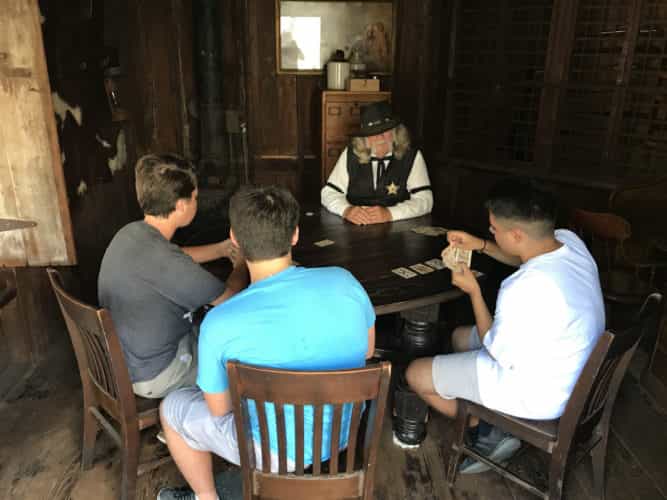 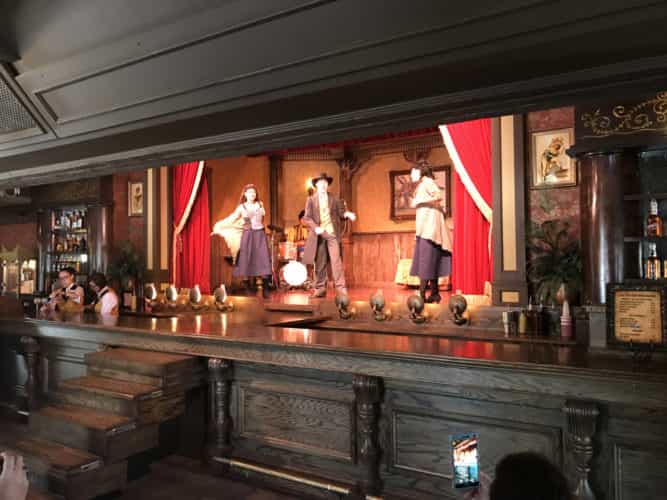 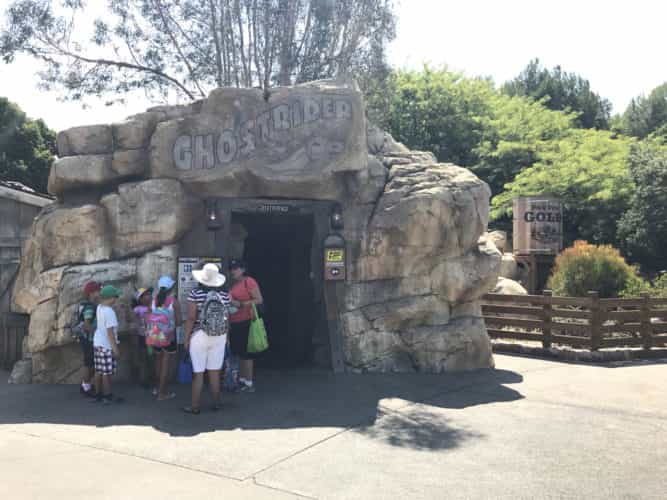 Our first ride was right in Ghost Town. It’s a wooden roller coaster called GhostRider (No, not from Marvel.) We were expecting it to be rough, like most wooden coasters tend to be, but it was pretty smooth. We loved it. Here’s a look at our point of view.

As we were walking though Camp Snoopy, we noticed a horse and buggy ride going across a bridge. We later took a ride on this Butterfield Stagecoach. It was a fun little ride.

Not where we expected to see horses. @knotts pic.twitter.com/NRMOgjeCzx 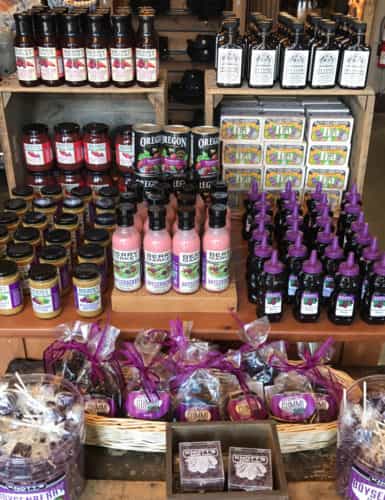 In just about every store, you’ll find food items based on the boysenberry. Walter Knott grew a delicious variety of the berry and became famous for it. If it can be made with boysenberry, they have it at Knott’s Berry Farm. We tried a few items; lollipop, soda, juice, licorice and chapstick. But our favorite was the boysenberry pie with vanilla ice cream at the Ghost Town Grill. I am still craving more. 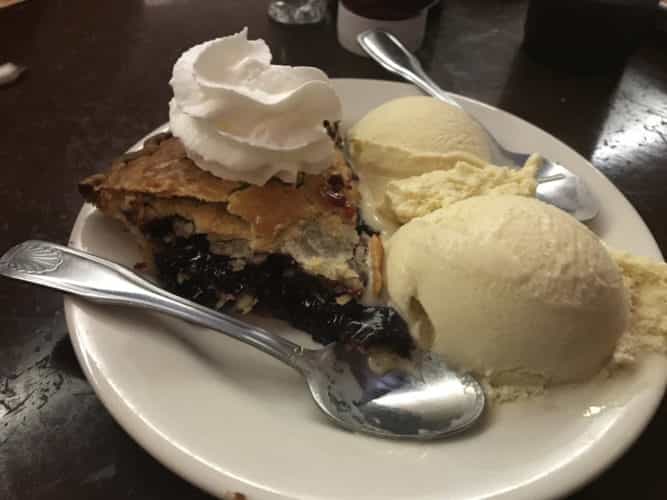 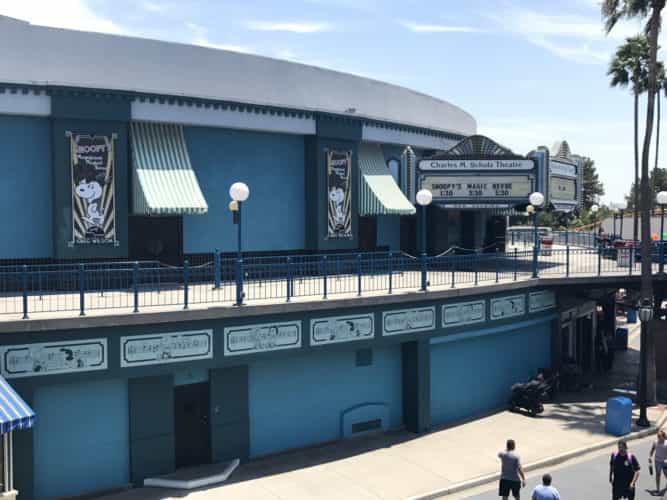 Next we headed to see “Snoopy’s Magnificent Magical Revue” in the Charles M. Schulz Theatre. It was fun, with a few magic tricks we couldn’t figure out. 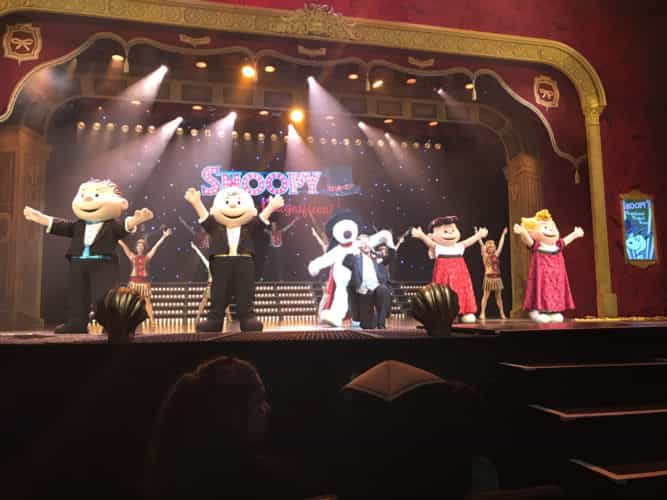 Elsewhere in Ghost Town, we rode the Pony Express. The ride vehicles are similar to Tron, but you’re riding on the backs of horses instead of Lightcycles. It was fun, but a bit short. Here’s our POV: 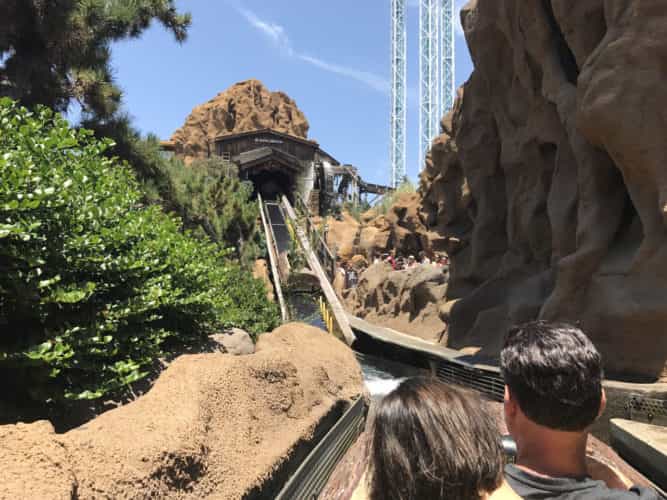 Another ride in Ghost Town is the Timber Mountain Log Ride. It may look similar to Splash Mountain on the outside, but it actually opened before Splash did. Here’s a ride-through: 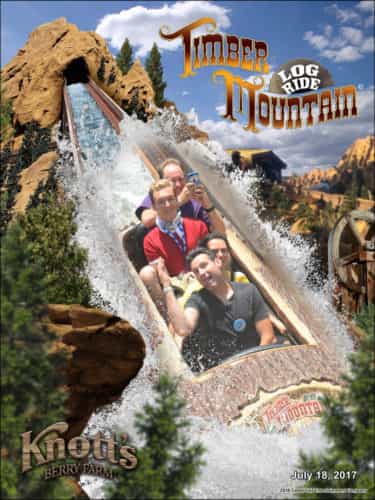 Here’s our ride photo. I like how they insert us into a clear picture of the mountain. 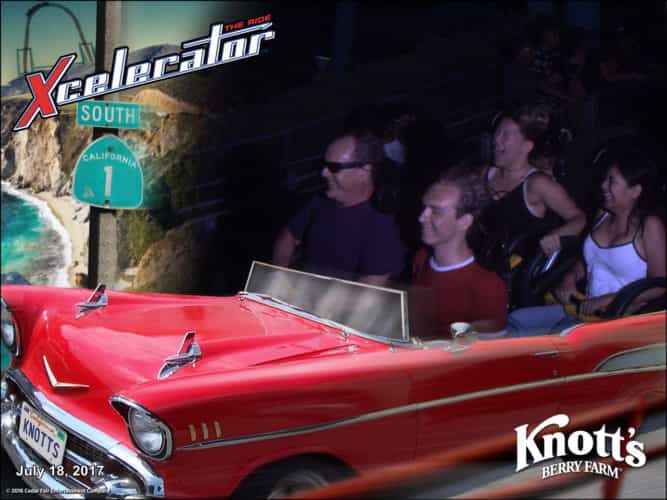 They also inserted us into a background in this Xcelerator roller coaster ride photo. This ride is in the Boardwalk area of the park and goes 0-82 mph in 2.3 seconds. Here’s our front row ride: 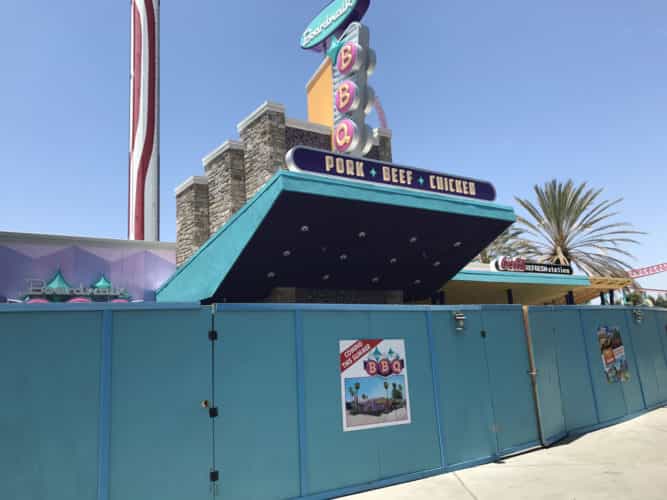 This restaurant is coming soon in the Boardwalk area. 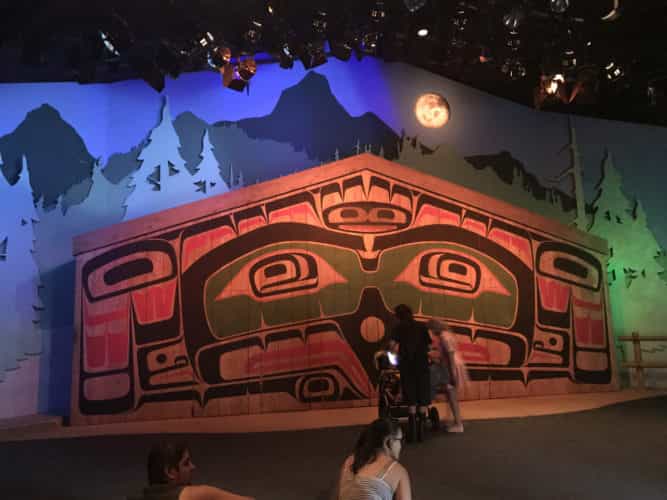 Another show we saw was the Mystery Shack. As the park map doesn’t really give any info, we didn’t know what this show was about, but the name sounded interesting. This is the waiting room and entrance area. No photos or video were allowed in the show, but it was an interesting show about Native Americans with some cool special effects.

Another area of the park is Fiesta Village. You can see a bit of an overview of it on this video from the Jaguar! roller coaster: 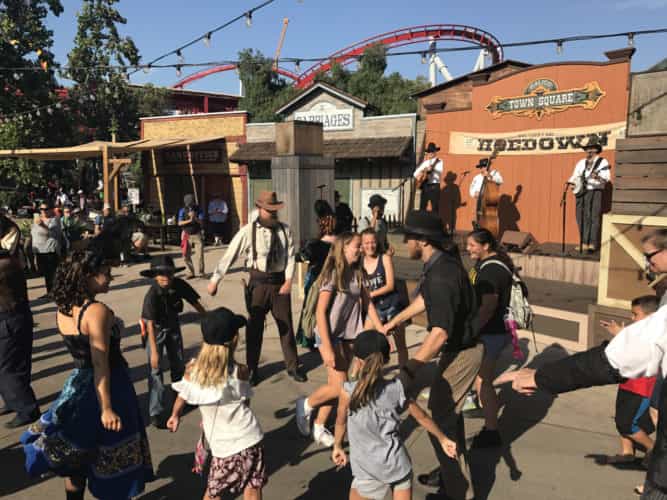 In the evening, back in Ghost Town, the Ghost Town alive event came to a close with the Founder’s Day Hoedown where all the townspeople and guests came together to dance and have fun. We heard we missed a bank robbery and an election earlier in the day. 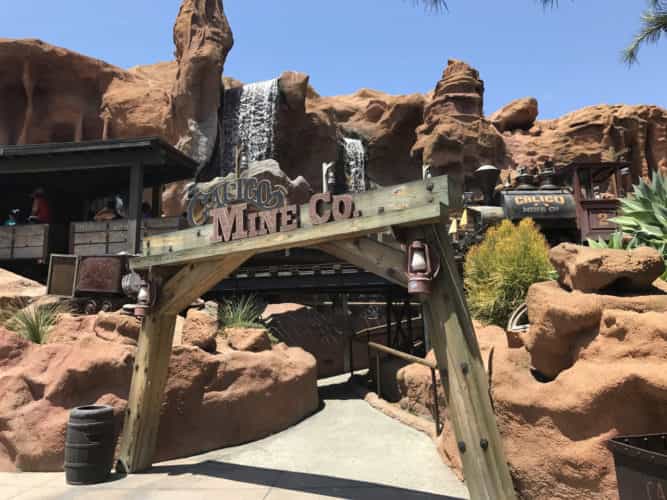 The Calico Mine Ride in the Ghost Town area is unique. It’s essentially a dark ride through a mine filled with animatronics. Here’s a look: 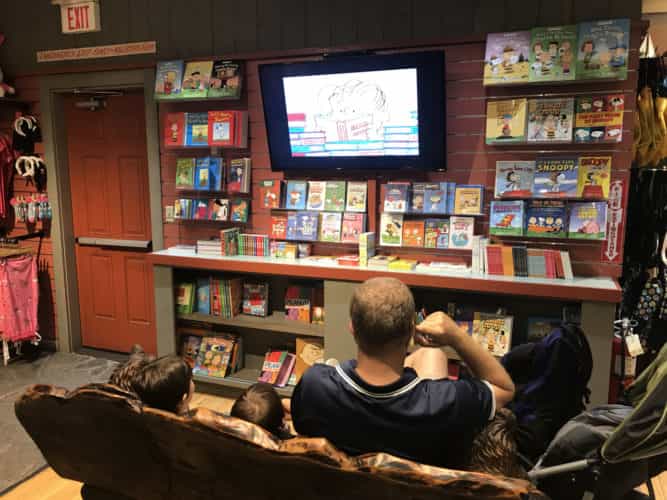 We ended our day visiting the various gift shops, looking for Knott’s and Peanuts merchandise and clothing for souvenirs. This was a nice area in one of the shops where kids (and parents) could watch Charlie Brown cartoons.

We didn’t get to see all the shows or ride all the attractions and we were there about 12 hours. So we recommend a couple of days to visit, and more if you really want to experience all of Ghost Town Alive, which ends Sept. 4. But there are many events throughout the year: Knott’s Scary Farm, Knott’s Boysenberry Festival and Knott’s Merry Farm. Plus they have their own hotel and a separate water park. We will definitely be back.

For more information, visit Knotts.com. We recommend UndercoverTourist.com for tickets and MEITravel.com for your hotel plans and more.