Photo Update: Strolling through the Magic Kingdom – May 2010 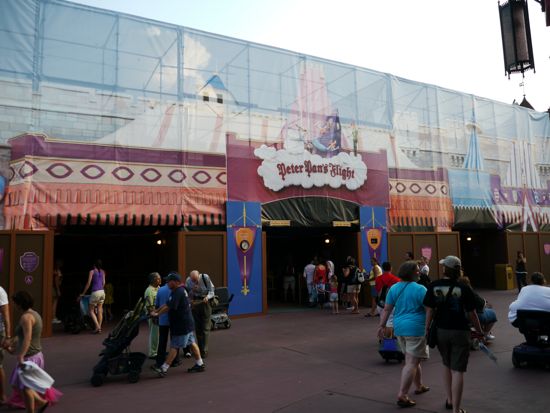 Come with me for a stroll through the Magic Kingdom. We’ll walk down Main Street and around the park counter-clockwise, starting in Tomorrowland. Let’s see what’s happening.

Just like in the picture above, I spotted at least six different buildings with this decorative wrapping around them. It doesn’t look so bad since the covering has a picture of what the real building looks like. Can you imagine how it’d look if that many coverings were all just blank? 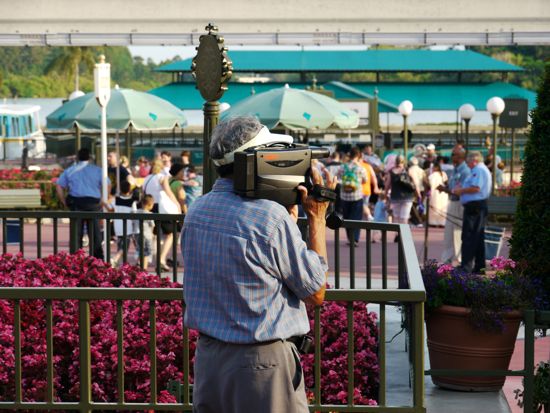 Starting at the front gates I noticed this guy with a vintage video camera. I guess if it still works, why not. It’s hard to believe they’ve shrunk that down to practically credit card size now. 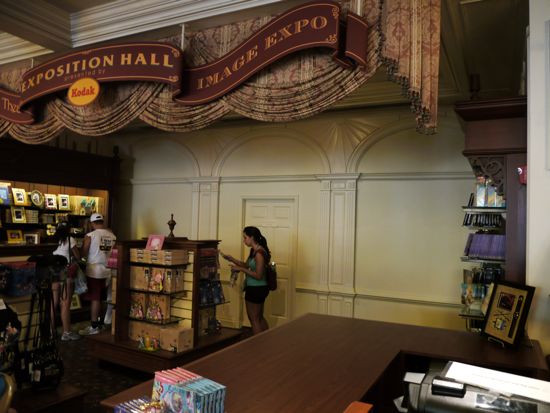 One side of Exposition Hall has construction walls up and this wall inside is now blocking off the back. This will become the new home for Mickey and Minnie when Toontown closes to make way for the Fantasyland Forest expansion. 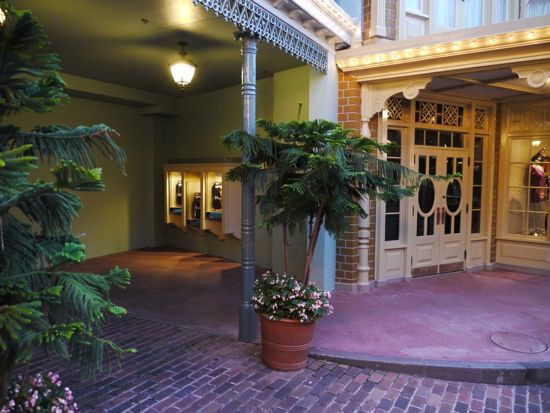 I went down to the end of the side street off to the right of Main Street to sit for a bit. Wow, they still have pay phones here. I wonder how often they get used? 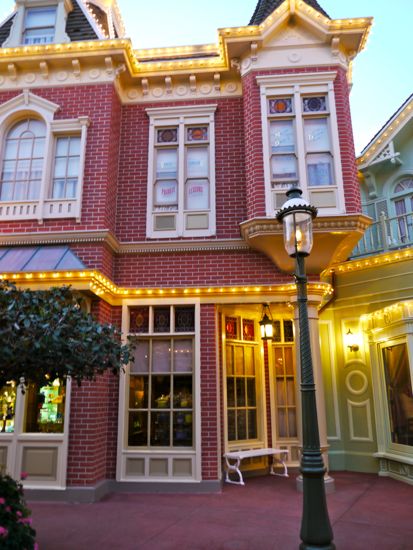 While sitting on that bench, I kept hearing noises and talking coming from somewhere. I looked up and sure enough, the windows marked private singing lessons and dance lessons were open. 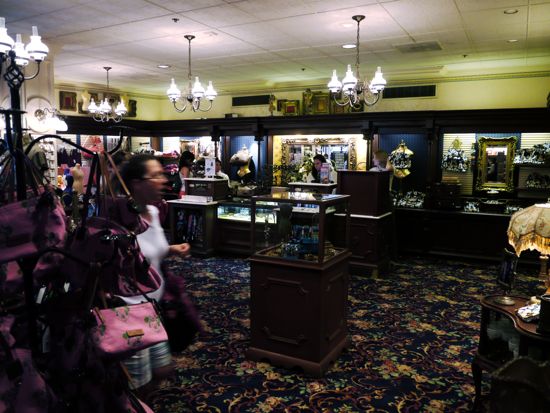 The shop off Main Street that used to sell trading pins is now offering clothes and accessories. 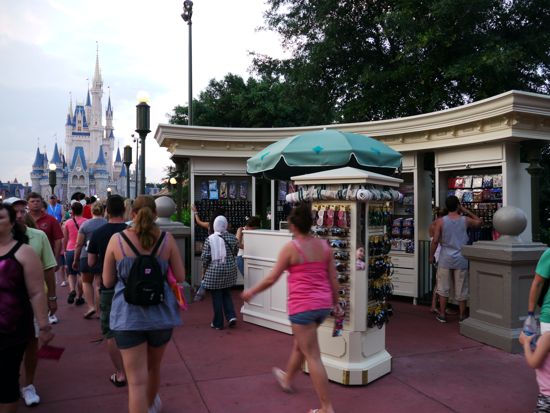 This outdoor stand at the end of Main Street is selling pins. The pin shop in Frontierland is still there also. 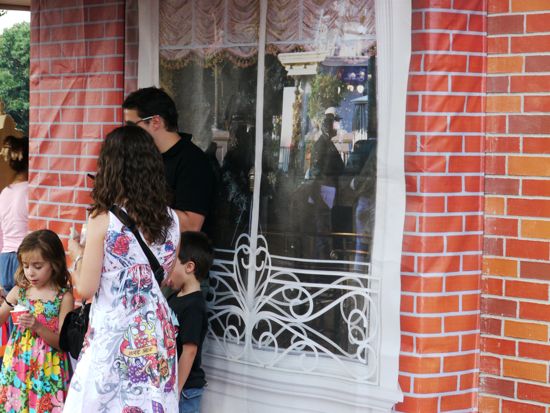 This shows how well the decorative construction wrapping works to deceive your eyes. With this family leaning here, it almost looks real. 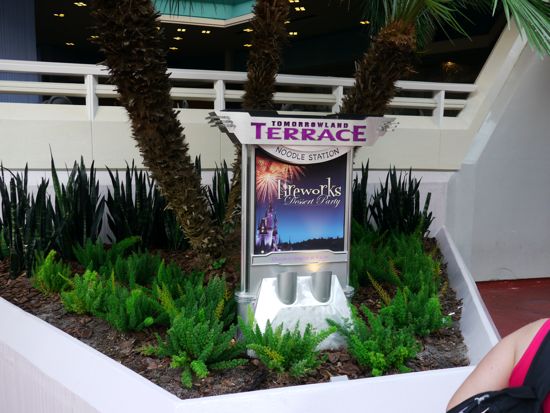 The fireworks dessert parties are happening once again after closing for a short remodel. This sign has been added outside the Tomorrowland Terrace Noodle Station. 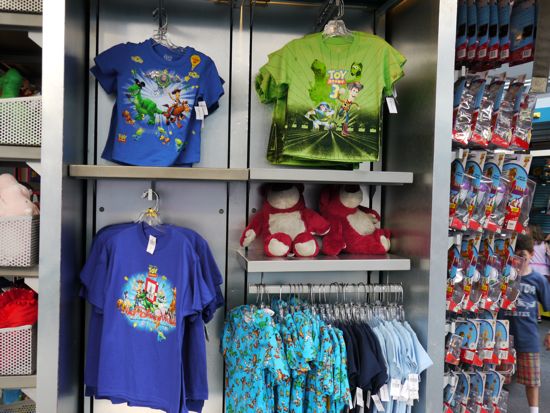 A couple of weeks ago my son had a hard time finding a Lotso bear (from Toy Story 3) for sale at Disney’s Hollywood Studios. But it seems all the Disney World stores now have plenty in stock. This stand is outside of Buzz Lightyear’s Space Ranger Spin. 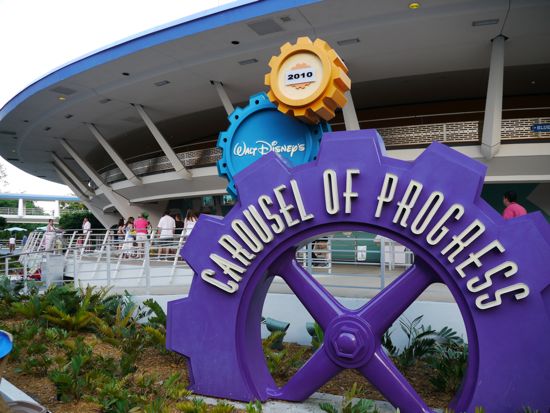 I’m glad to see the Carousel of Progress is still open and attracting guests. It’s one of my favorite attractions, but it could use an update soon. 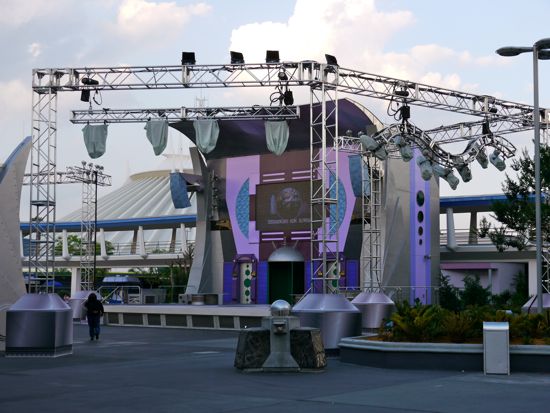 Nothing is happening here. They’ve added a lot of scaffolding and lights since this stage is primarily used for nighttime shows during special events now. 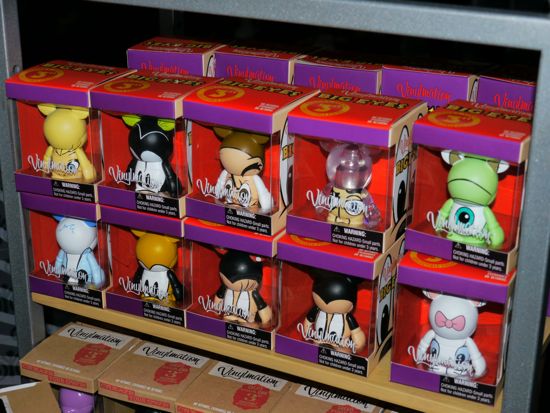 I saw the new “Big Eyes” series of Vinylmation figures in the Space Mountain store. Look for our feature story on the Vinylmation craze in the upcoming Summer issue. 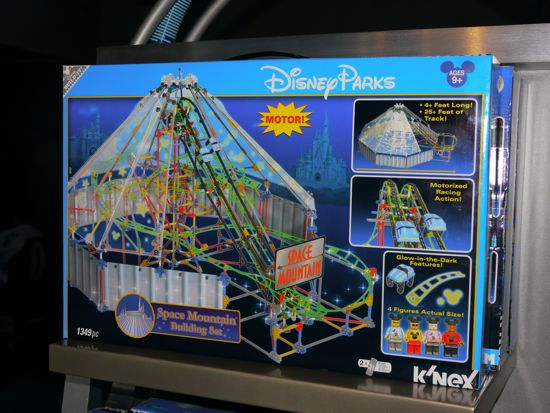 I spotted this new Space Mountain construction set by K’Nex inside the Space Mountain store also. It’s really cool, but it’s pricey at $229.95. I later saw this set for sale at World of Disney at Downtown Disney along with a Dumbo set, which was less than $100.

Here’s what you’ll see as you currently head from Tomorrowland to Fantasyland. You can go right to Toontown or walk along the wall to your left into Fantasyland, or as some are calling it, Constructionland. 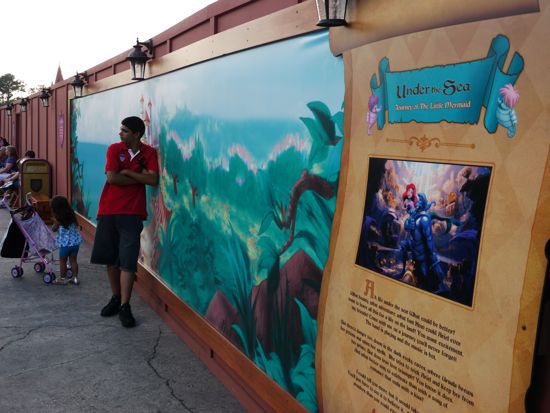 Along the long wall are these murals showing what’s to come in 2012 when Fantasyland Forest opens. As you can see, some guests are using the mural as a picture backdrop. 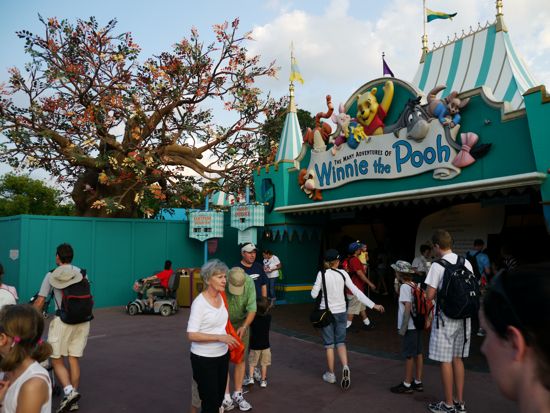 They’ve closed Pooh’s Playful Spot playground and moved the large tree across the street next to The Many Adventures of Winnie The Pooh ride. I think it looks pretty good here. 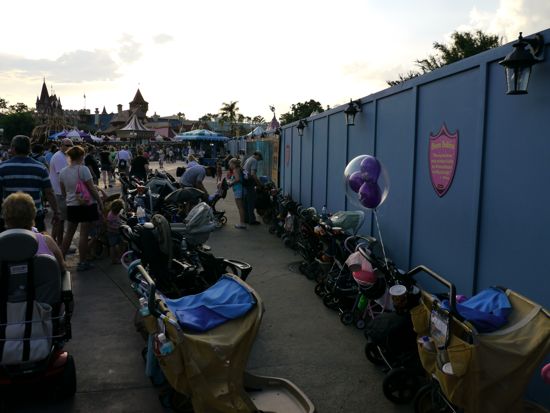 The wall makes a good stroller parking area between the murals. 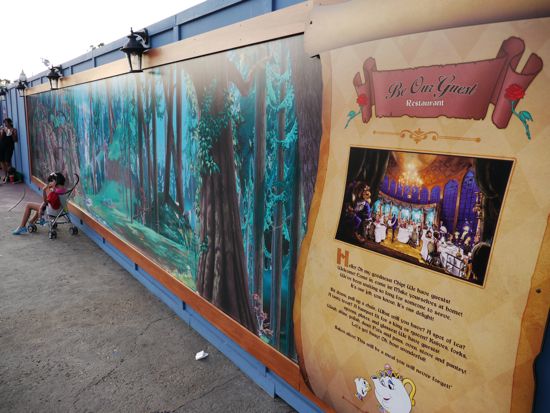 The mural telling about the Be Our Guest Beauty and the Beast restaurant. 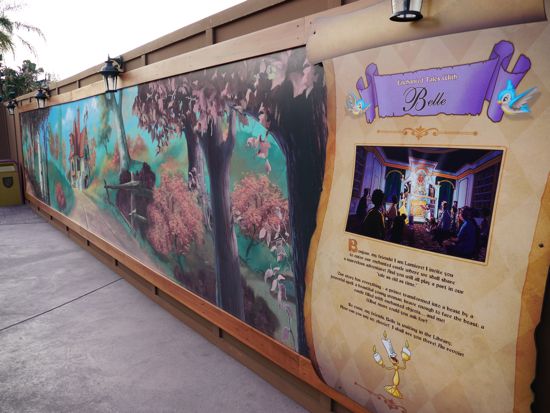 This one tells about the Belle meet and greet attraction coming. For more information about the Fantasyland Forest expansion, click here. 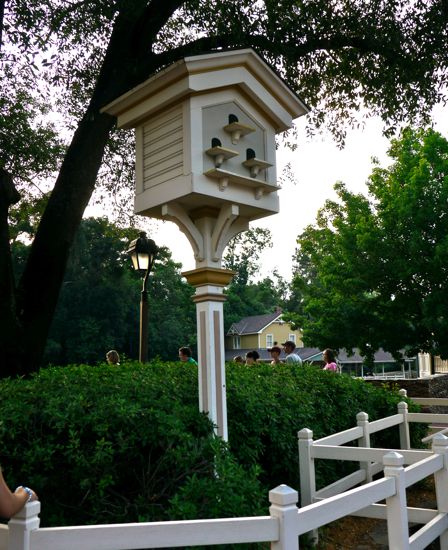 Boy the birds in this house in Frontierland had their music up really loud. (It’s a speaker disguised as a birdhouse.) 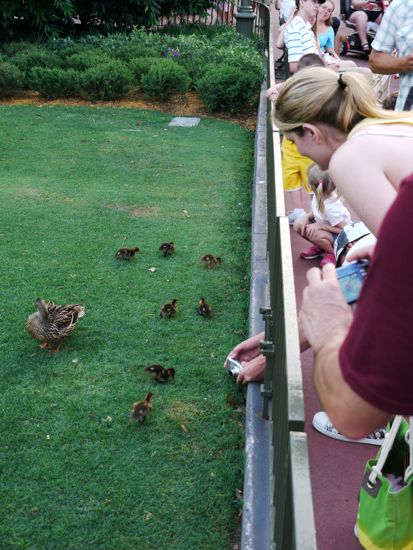 Back in the hub in front of the castle, many ducklings were looking for handouts. 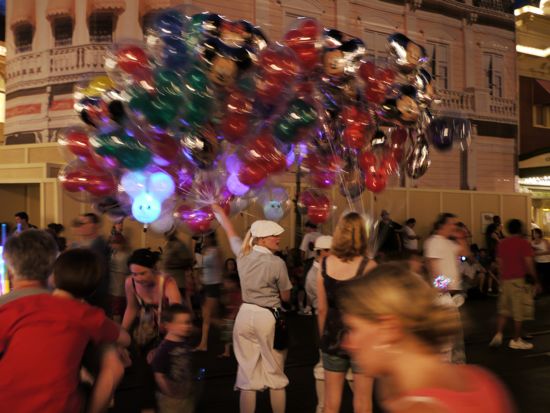 I like the new balloons that light up at night. 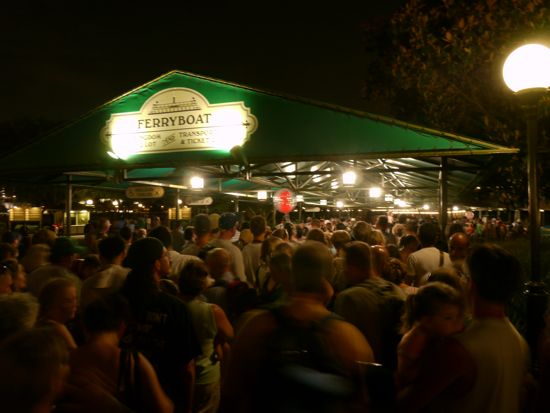 This crowd waiting for the ferryboat back to the Ticket and Transportation Center reminded me why I usually leave before the fireworks.

Video: Dance Off with the Star Wars Stars 2010 – Vader and Fett get down to Michael Jackson tunes

Out of the Loop: A look at the new Universal Studios Singapore

The National Museum of American History wants your...

Wow those light up balloons are fantastic! do you know if they are just for the summer, or will they be a permanent thing?

I think they’re permanent. But, of course, they only sell them after dark. You can set them to flash, and you can turn them on and off. I’m not sure what they cost.

Thanks for the update! I was just there the first week of April and all of that construction stuff is new since then!

Is the Storytime with Belle area still open and operating? On the official park website they still advertise it along with Ariel’s Grotto and other areas they have closed!! Just checking, going back in August with two eager girls!

Nick, I haven’t heard anything about the opening dates except 2012. My guess is that they’ll open everything at once.