Photos and Video: A detailed look at the new Star Tours 3D attraction 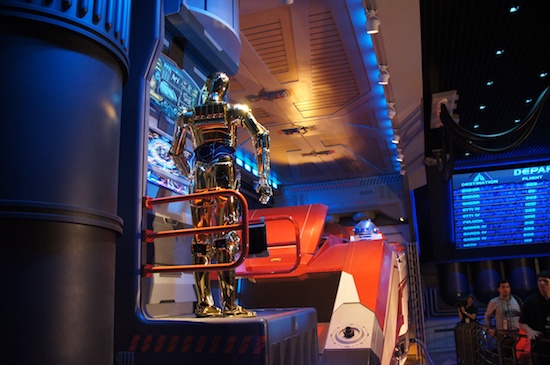 Star Tours – The Adventures Continue officially opened today with a grand display, which included lots of Star Wars characters and celebrities. The biggest surprise was the appearance of Disney CEO Bob Iger and Star Wars creator George Lucas. Who knew they could wield lightsabers that way (video coming). Now that the ride is open, let’s take a look inside. 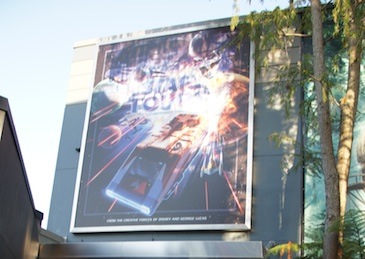 Not much has changed outside of the attraction except this mural above the entrance. 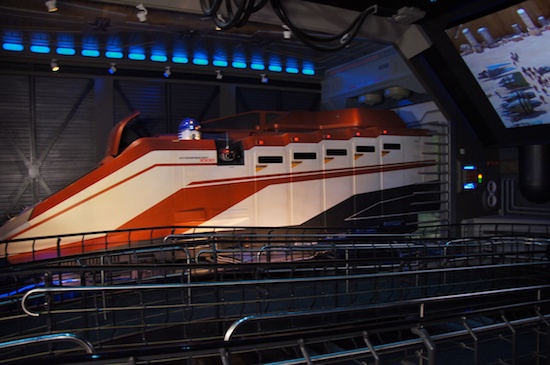 As seen here and in the top photo, the first room looks pretty much the same, except we now see the Starspeeder 1,000. It’s the first Starspeeder model since the ride now takes place before the last ride’s timeline. The update takes place in between episodes three and four. This Starspeeder looks shiny and new. The large screen has been updated to HD and features new scenes. 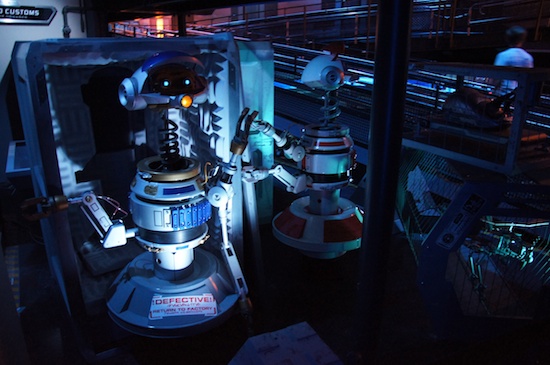 After you leave the first room, you’ll see this familiar guy on your left. It’s Rex, the pilot in the first version of the attraction. Listen close and you’ll hear him say some lines you may remember. Notice the defective tag on him. I guess he’s not ready to be a pilot yet. 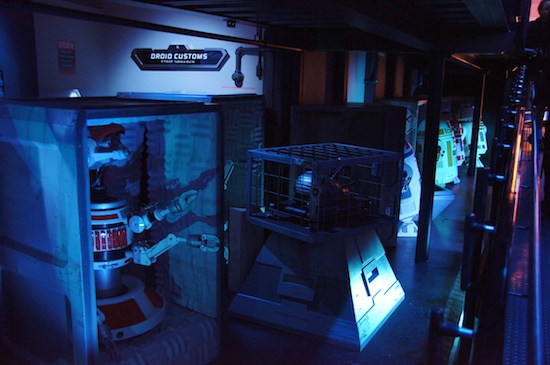 Next to him are some more droids of his same make in red stripes. You may also recognize the droid birds in a cage. They used to sit above an entryway in the old queue. 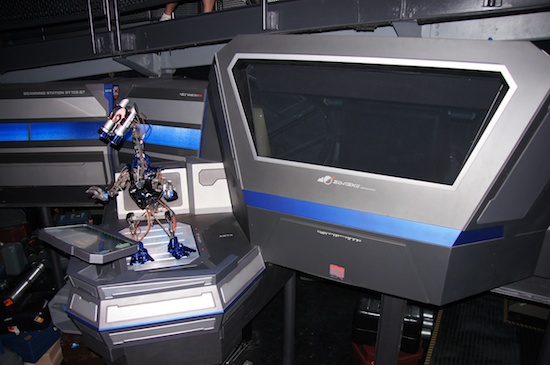 Across the way is the most interesting part of the queue. It’s fun to watch this droid scan traveler’s luggage. You’ll spot some familiar items in a lot of the suitcases. You’ll see things such as Madame Leota’s head from the Haunted Mansion, Wall-E, Indiana Jones’ hat and whip and much more. 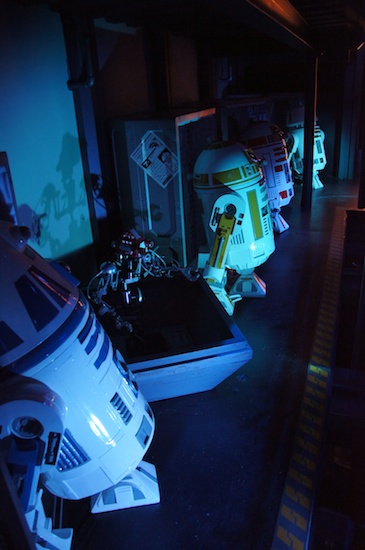 A little further down are some astromech droids similar to R2-D2. 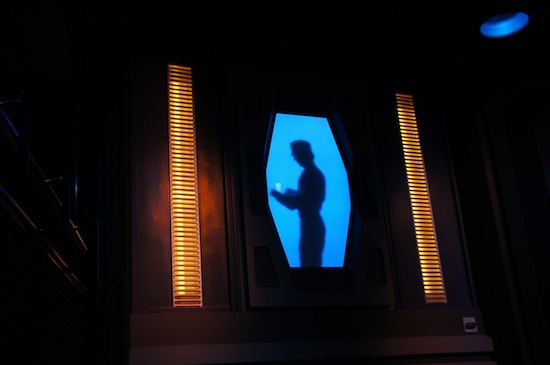 Above your head as you turn the corner you can see the shadows of other passengers passing by at your spaceport. You may recognize some of the outlines. 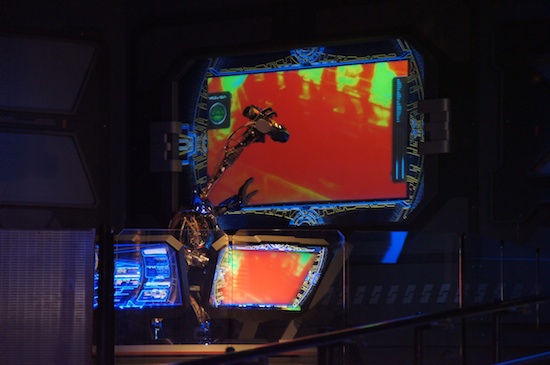 On your left near the top of the slope is this scanning droid. He doesn’t scan your luggage, he scans you. You can see your colorful outline moving on the screen as you pass by. 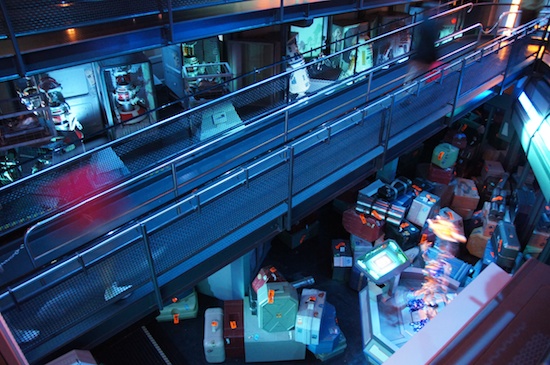 Here’s a look back down from the top of the ramp. Notice all the unclaimed baggage on the floor. My suggestion is to travel light. 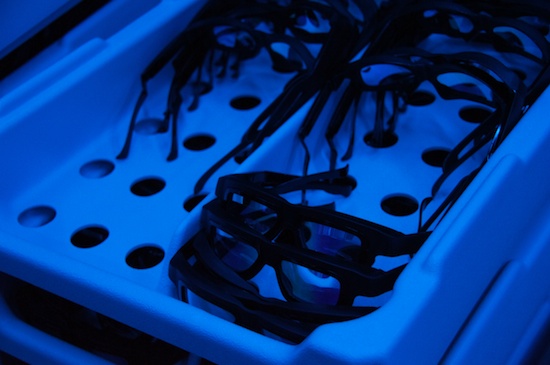 Not much looks different in the loading area, except for the new safety video, which plays homage to the old one. You’ll also now need to pick up a pair of these nifty-looking 3D glasses. 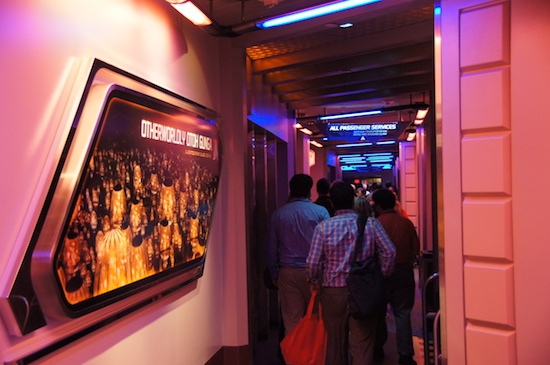 As you leave the ride, you may notice the travel destination posters have been updated and redesigned.

Here’s a full video walk-through of the new Star Tours, including some on-ride footage:

Star Wars Hyperspace Hoopla is back, rockin’ a bigger stage

please give a FULL ride video of ALL the destination, please? and thank you for the coverage.

Unfortunately video is not allowed on the ride itself. The video we used here was provided by Disney.

Thanks Matt, for these amazing pics. Its really nice to experience these in 3-D.

something I’ve had an interest in.