Photos and video from the Pokemon World Championships

On Saturday I attended the 2008 Pokémon World Championships at the Hilton hotel near Downtown Disney. Although I’m not into Pokemon myself, I brought along my 9-year-old son, who is a big pokemon fan.

The day started with the opening ceremony where they showed a short video and talked about the 400-plus trading card game entrants from 25 different countries. As soon as the ceremony ended, the games began. Although people from every country could enter the trading card game championship, the video game challenge was between the U.S. and Japan. Everyone in the championship had won their spot by qualifying earlier this year.

In addition to rooms set up for the card championships and video game championships, they also had a free-play room available and a movie room showing Pokemon movies all day. There were also many pokemon banners, signs and walk-around and blow-up characters.

The movie is below. You can see the photo gallery here.
For more information and the full list of winners, visit go-pokemon.com/worlds. 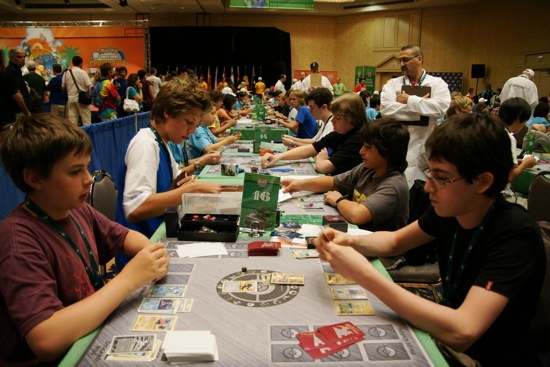 ‘All That Glitters: The Crown Jewels of...

A look back: Guests rock their Disney...

Is Jack back for Halloween Horror Nights...