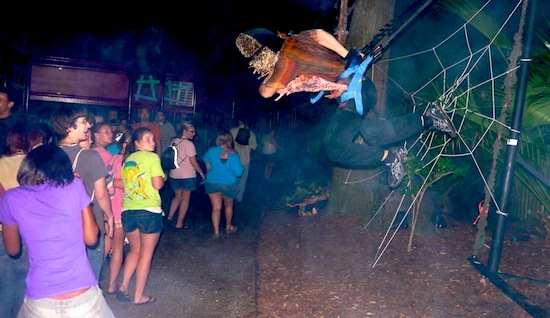 Busch Gardens launched the 2010 version of Howl-O-Scream this past weekend. The event continues on select nights up to Halloween. We didn’t make it through all the haunted houses yet, but we were able to catch the scare zones and two of the shows. Here’s a look at the fun:

Here’s our video of the scare zones, including one that’s not listed on the guide map, a roaming hoard of evil clowns:

This is a preview of a new comedy musical called Blood Relations. Look for pop culture spoofs mixed with great live singers. The audience picks Lady Betty Blood’s killer, so if you see the show more than once, you may get a different ending. The writer/director of Blood Relations, J. Michael Roddy, used to be the manager of show development for Halloween Horror Nights.

Each night of Howl-O-Scream, Sylvie and her killer band, MyX, put on a live concert. They perform three songs. Here’s part of the first two and the whole live version of the theme song for this year’s event, My X.

Here’s our full photo gallery. Thanks to Kevin Cantor for contributing his photos as well:

Photos and video from opening night of Halloween Horror Nights 20

Knott’s Peanuts Celebration returns for a season of...

I will be going to Howl-O-Scream in the middle of October. Do they allow you to film the houses like OAM did or are they like Halloween Horror Nights is? Also, what was your favorite house?