The famous auction scene with the redhead in the Pirates of the Caribbean ride is going to be changing. The redhead will still be there, but in a new role. 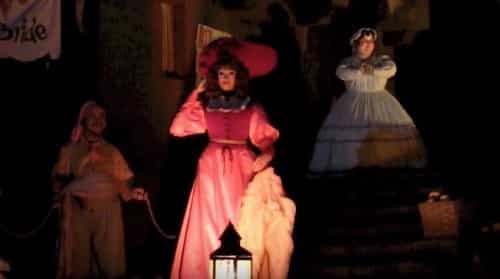 Here’s how the redhead currently looks in the Pirates of the Caribbean ride in Magic Kingdom at Walt Disney World.

Starting with the reopening of the ride at Disneyland Paris on July 24, then at Disneyland in California and Magic Kingdom at Walt Disney World in 2018, the redhead will no longer be up for auction. In the new scene, she’ll be joining the pirates and helping them auction off the local townspeople’s items at the Mercado auction.

But that’s not the only change overseas. Disney announced the Paris version of the ride will also include new Audio-Animatronics figures (including Captain Barbossa), costumes, special effects, lighting and sound, including some of the music from the films. But don’t fret, “A Pirates Life for Me” song will still be in the Paris attraction.

“To me, the Imagineers are simply reflecting what Walt started the day Disneyland opened – making changes that create exciting new experiences for our guests,” said Marty Sklar, former creative executive for Walt Disney Imagineering. “I can’t think of a single attraction that has not been enhanced and improved, some over and over again. Change is a ‘tradition’ at Disneyland that today’s Imagineers practice – they learned it from their mentors, many of them Walt’s original team of storytellers and designers – the Disney Legends.”

Kathy Mangum, senior vice president, Atlantic Region Executive for Walt Disney Imagineering, said, “Our team thought long and hard about how to best update this scene. Given the redhead has long been a fan favorite, we wanted to keep her as a pivotal part of the story, so we made her a plundering pirate! We think this keeps to the original vision of the attraction as envisioned by Marc Davis, X Atencio and the other Disney legends who first brought this classic to life.”

Sklar added, “Pirates of the Caribbean has always represented great Disney Park storytelling; it has set the standard for the theme park industry for half a century. But it’s a story you can continue to add fun to, with great characters in new ‘performances.’ That’s what the Imagineers have done with this new auction scene – it’s like a theatre show with a new act.”

The Blue Lagoon Restaurant in Paris will also have some changes, re-opening as Captain Jack’s. The story says Captain Jack won the restaurant in a wager. The interior will be re-themed and the cast members will be dressed as pirates.

Here’s a look at the pre-refurbished ride at Disneyland Paris:

POV Ride on Pirates of the Caribbean at Disneyland Paris

Here’s a ride-through of the attraction at Magic Kingdom:

As much as I hate them making changes to the ride, this one part involving human trafficking always seemed a little questionable, so glad they are making this revision.

NO, NO NO!!!!! THEY HAVE ABSOLUTELY RUINED IT!!! It’s supposed to be PIRATES of the Caribbean, not Sunday School Teachers of the Caribbean. Why should pirates be politically correct? They’re pirates, for pete’s sake. It was bad enough when they put the plates of food in the ladies’ hands where the pirates are chasing them.. That scene used to be funny, because first you saw the pirates chasing the women, and then there was the unattractive woman chasing the pirate, who was running for his life with a hysterical expression. That was funny. Having the pirates running after food instead really ruined the joke. Now the auction is ruined??!! If they so badly wanted to put in something empowering, why not leave the auction as it was and have Elizabeth Swann in the next scene preparing to lead a charge to liberate the captive women? Or just plain leave it be. It was funny. And I might add, the plump woman looked pleased as punch to be being auctioned off – it seemed like she was relishing her chance to finally get a man. That was cute. And the redhead was great – showing off to get the highest bidder, and therefore the richest man. She was cunning and cool. Now it’s all ruined. I don’t ever want to go back and see it like this. Worst idea EVER.﻿