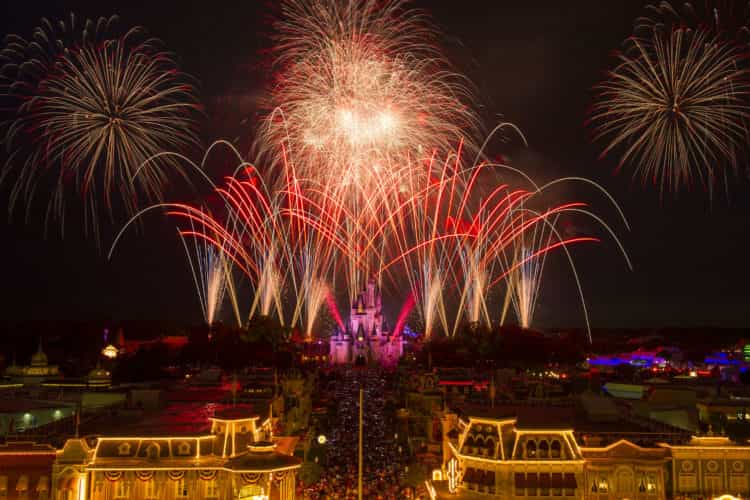 Walt Disney World, SeaWorld, and other Orlando area attractions are holding special Fourth of July celebrations for the Independence Day 2017.

If you are searching for ways to celebrate this Fourth of July holiday with Orlando’s famous attractions, look no further, because we’ve compiled the full lineup of Independence Day 2017 festivities at Central Florida’s theme parks.

Here is our rundown of activities scheduled on July 4, 2017 at Orlando area attractions, starting with the major theme park resorts:

Walt Disney World Fourth of July 2017 Celebrations
Each of Walt Disney World‘s four theme parks will present a nighttime spectacular on July 4th, though two of them will simply stage the standard evening shows they perform throughout the year. 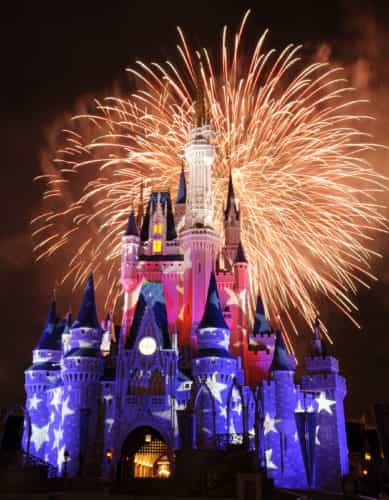 Disney’s Celebrate America! A Fourth of July Concert in the Sky: Magic Kingdom Park commemorates the Fourth with fireworks choreographed to patriotic music. The red, white and blue extravaganza will be performed on both July 3 and July 4 at 9 p.m. If you want to see the Magic Kingdom Independence Day fireworks, the performances on the 3rd are traditionally far less crowded than the 4th. 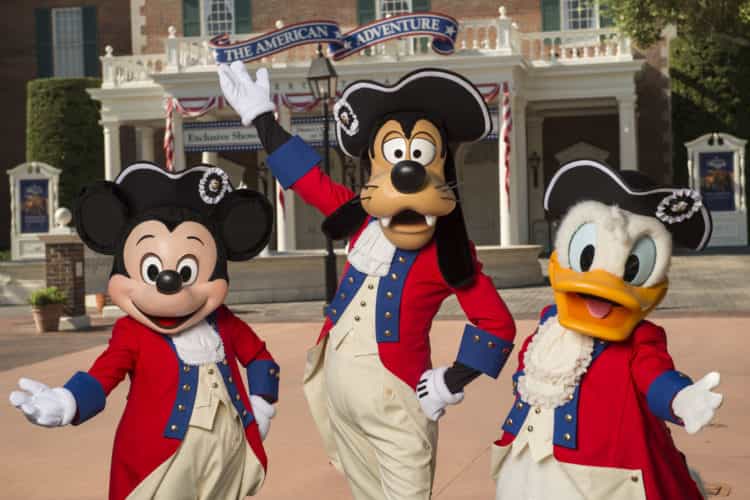 Disney Characters Mickey Mouse, Goofy and Donald Duck dress in their patriotic best to celebrate the Fourth of July at Walt Disney World Resort. The characters appear for meet and greets at the American Adventure at Epcot for the holiday. (David Roark, photographer)

Other Independence Day entertainment at Walt Disney World includes:
• Holiday dance parties will be held at the Magic Kingdom in Frontierland and Tomorrowland from 7 to 10 p.m. on July 3 and 4.
• The Muppets Present…Great Moments in History: Miss Piggy, Kermit, Fozzie Bear and friends reenact famous moments in American history in a whimsical way. The live show is performed daily in Liberty Square in the Magic Kingdom.
• The Voices of Liberty a cappella group will perform traditional Americana tunes during a 4th of July Concert on Epcot’s America Gardens Theatre stage at 5:30, 6:45 and 8 p.m.
• American Music Machine will perform pop hits on Epcot’s America Gardens Theatre stage at noon, 1:00, 2:00, 3:00 and 3:50 p.m.
• Meet Mickey Mouse and his friends — all dressed up to celebrate America’s birthday – from 11 a.m. to 5 p.m. on July 4 at the American Adventure Pavilion at Epcot.
• Disney’s Grand Floridian Resort & Spa hosts an All-American July 4 cookout from 7-8:30 p.m. The meal includes grilled steak and shrimp, hot dogs, baked beans, sides, plus specialty drinks, beer and wine. There’s a live DJ and crafts for kids. After dinner, head to the Grand Floridian Marina for sweets and a view of the Magic Kingdom Park’s July 4 fireworks. Cost is $120 plus tax, gratuity is included; $59 ages 3 to 11. For reservations, call 407-WDW-DINE.

Universal Orlando
Universal Orlando has not held a special Fourth of July celebration in CityWalk or Islands of Adventure for several years. However, their usual nightly Cinematic Spectacular show, which features fireworks, will be performed at Universal Studios Florida at 9:45 p.m. on July 4.

SeaWorld Orlando
SeaWorld Orlando marks the Fourth of July by adding a one-of-a-kind, patriotic finale featuring fireworks, pyrotechnics and lasers to “Ignite,” the park’s new end-of-day spectacle. The Independence Day fireworks display will begin at 10 p.m. and the best viewing area is from the park’s Bayside Stadium. Reserved seating packages will be available at the park for $39. 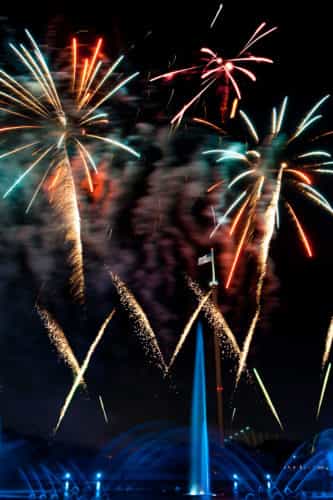 The park is also offering an Independence Day Dinner with Shamu Package, which includes a buffet dinner and a reserved VIP area to watch the fireworks. Packages are available at SeaWorldOrlando.com for $99 per adult and $49 for children.

The Orlando Eye at I-Drive 360
The I-Drive 360 complex will not be hosting a fireworks display, but they will offer a range of other holiday activities on July 4. A D.J. and a variety of entertainment and family-friendly activities will be held in the I-Drive 360 Courtyard from 6:30 p.m. to 11 p.m. Starting at sunset, the Coca-Cola Orlando Eye and the entrance fountain will turn red, white and blue in celebration. A new light show on the Coca-Cola Orlando Eye will be featured three times throughout the night. 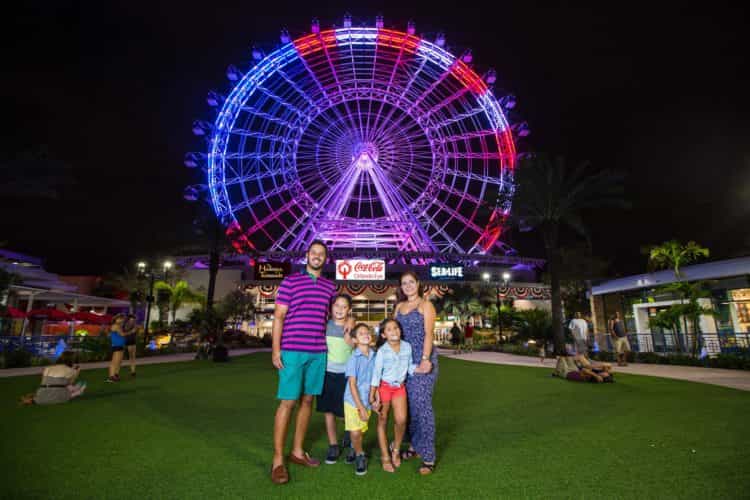 Guests can also take selfies with Uncle Sam’s wax figure from Madame Tussauds, and Shake Shack, Paramount and iCafe de Paris will be in the Courtyard selling food and drink. The Coca Cola Orlando Eye will be open from 10 a.m. to 11 p.m. on July 4.

Legoland Florida
Florida’s Legoland kicks off its signature summerlong Knight Lights event on July 1, and will present a special version to celebrate Independence Day. A July 4th Fireworks Spectacular featuring patriotic music will light up the sky over Pirates’ Cove at 9 p.m. Special brick viewing glasses will be handed out at Pirates’ Cove when stadium opens at 8:00pm. Guests on July 4th can also participate in building a giant American Flag out of “super” Lego bricks at theWells Fargo Fun Town 4D Theater from 11 a.m. until the flag is complete.

Additional Knight Lights activities available on July 4 will include meet-and-greets with exclusive Lego characters like Lance Richmond of Lego Nexo Knights the new Lego Jester, and a live stage show in Heartlake City with DJ Mia and the rest of her Lego Friends. All Legoland Florida Fourth of July activities are included in regular park admission.

Busch Gardens Tampa
The reimagined Summer Nights event is currently running nightly at Busch Gardens Tampa, and the park will expand its evening activities even further on July 4th. Tampa band the Actual Bank Robbers will perform on the Gwazi Park main-stage and will also host a live Summer Nights Dance Challenge with additional special guests. The park is open on July 4th from 10 a.m. to 10 p.m., and will finish the day with an extended Independence Day fireworks show (featuring all-new patriotic medley) starting at 9:30 p.m. 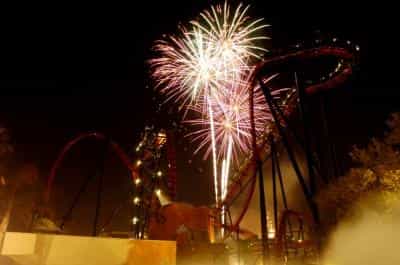 Other Summer Nights activities that will be available on July 4th include three party zones at Cheetah Hunt Plaza, Pantopia and Stanleyville; the new Turn It Up! ice show in the Moroccan Palace theater; parkwide food and drink samples; and roller coasters in the dark.

Outside of the themed attractions, local Independence Day celebrations are held across Central Florida, including in downtown Orlando, Altamonte Springs, Winter Park, Sanford, Kissimmee, and Celebration. Check out 4thofjulyorlando.com for links to all the area events.

Ripley’s Believe It or Not! buys original Luke Skywalker lightsaber for $450,000