Planet Hollywood to redesign Downtown Disney location as an observatory 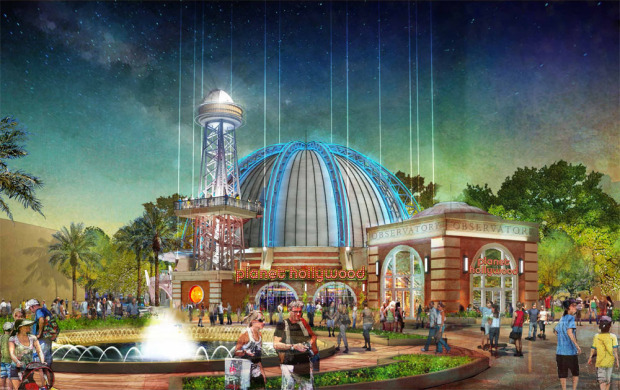 Planet Hollywood is transforming its Orlando flagship location into a new four-story stargazing observatory set to debut in spring 2016 with the reimagining of Disney Springs.

The remodeled Planet Hollywood Observatory will overlook the heart of Disney Springs with a newly-expanded outdoor terrace and bar. Within the entertainment emporium, guests are invited to “Dine Amongst the Stars” through a refreshed menu, outdoor bar and lounge options, a new merchandise line and a host of celebrity partnerships.

Intensive renovations and artistic treatments, spearheaded by design firm Elkus Manfredi Architects, will take place early next year and will align Planet Hollywood Observatory with the transformation of Downtown Disney into Disney Springs.

The Observatory’s exterior will share Disney Springs turn-of-the-century design aesthetic, while the interior’s refurbished upholstery, spherical planet-shaped lighting fixtures and finishing will create a welcoming atmosphere for fans to celebrate a new generation of superstar entertainers. New dining and lounge options will include a new outdoor terrace and outdoor bar space called Stargazers, which will feature live entertainment while music in the main dining room will be performed by a DJ. Walls and glass displays throughout the massive space will be adorned with imagery and memorabilia from various movies, paying homage to a long tradition of filmmaking and recognizing newcomers.

“We’re thrilled to be a part of Disney Springs and transform our brand as Disney evolves its exciting new venue,” said Planet Hollywood International Founder and Chairman Robert Earl. “With Planet Hollywood Observatory, we are refreshing our dining experience as we renew our commitment to the new, rising stars of the entertainment industry – a part of our core mission since inception.”

Refreshed dining options will highlight Planet Hollywood’s classics and introduce a host of additions. A curated beverage program will feature a variety of milkshakes, smoothies, wines, bottled and draft beers, as well as cocktails served in specialty glassware.