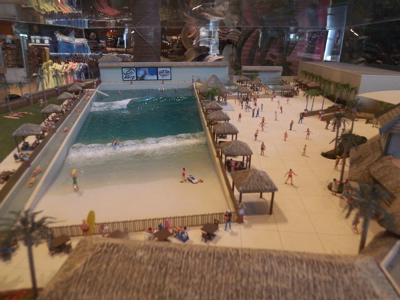 We’ve had readers ask us what’s happening with the long-planned, never progressing Ron Jon Surf Park at the Festival Bay Mall. By this summer, they were supposed to have a huge surf area with a full-size wave pool, two smaller ones and a lazy river that brings you back to the start after you’ve surfed to “shore”. The picture above is from a model of the park that used to sit outside of the Ron Jon store, which remains open in the mall.
Well an Orlando Sentinel story today answers our reader’s questions about the park:

Festival Bay Mall has given up on the original deal for the Ron Jon Surfpark, a partially built International Drive attraction slowed by repeated delays in the four years since it was announced. Also, Cocoa-based Ron Jon Surf Shop has pulled its name from the project, and the attraction’s developers say they need more cash before they can continue.

“We had some flaws in the technology and invested quite a bit of money in fixing that,” said Jamie Meiselman, founder and chief executive officer of the company behind the project, which calls itself Surfparks LLC. “The good news is we were able to solve the problems; the bad news is it came at a cost.”

Did we honestly really need another “water park” here in Central Florida? I think we’re not really missing out by not having this Ron Jon park come to fruition.

akeorlando are you just plain stupid, did you check out the design. It would be a legitimate surfing park with consistent waves. Something that would be used year around for training and supplying lessons to a slew of amatuers. It not just a water park as you describe.

akeorlando obviously doesnt surf…he has not the slightest idea of what he speaks… poor unfortunate fellow.

Hi! I was surfing and found your blog post… nice! I love your blog. 🙂 Cheers! Sandra. R.

Hey everyone that might still read this. Personaly i balieve i speak for everyone i surf with and most of orlando’s and east and west coast surfers. WE NEED THIS PARK!!!!! Every was, and still pumped at the possiblity that florida, the worldst worst surf break could have a anwser to our all our needs. Yes its a very exspensive project. were did that 8 mill go idk research? lol dout it. but thats not the point. You want to talk money! This park would rake in the cash! no matter how long it takes to build. If it has a 24.7 364 days a year wave breaking perfectly, all the other days that floridas coast is flat witch is almost all summer and sometimes most of winter long, the surf park would be packed!, yea instint crowd but worth the wait, I mean a few hour wait over a couple months wait for a swell to move in! come on now common sences. I dont think enough people even know about the project. I personaly have been following the reports as they came in from started to failure. I still know that this can happen we just need more people and we can make it happin! WE ARE AMERICANS DAMN IT, we can do what ever we want. Not only has the plan for this surf park stopped but also the plan to make an artifical reef out of sand bags off the coast has been stopped too due to poor funding and not enought people to speak out. I see some serious potiental in this surf park! Yea Ron Jons pulled there name from the project because they dont want the bad rep. There all about there money and wont waste it for nothing, no surf spirt. There are plenty of other companys that can help put this together. Its to early to give up on this. Not only will the surfers in florida be there, surfers from around the world would show up to surf and film the place. Alright i looked up and im dragging on and on about this i can go for days and days, pages and pages about things that need to be said about this amazing plan that needs to come through for everyone who surfs and the ones who are dieing to learn. NOT ENOUGH PEOPLE KNOW ABOUT IT! Not once did i see anything about this on t.v or anywere else but on the internet. Once agin WE NEED THIS SURF PARK!! I am willing to talk about this when ever just reach me at my email [email protected] Sincerly from a true surfer, Jonathan Ouellette

I new this park was not going to be completed. You cant really re-create mother nature to perfection. Ron jons sucks anyway

yes mother nature is uncontrollable and quite advance but you go to any major city and look at what we can build and you tell me that we cannot create a wave. LAZY SONS OF B…… It is so agervating that people are turned off buy the thought of the coast of something. If you ask me the brillinte designers who had mad the small scale wave in the shop have perfected it. im sure they dint get it in the first year or so but then agin it dint cost alot of money with big names riding on it. And yes RonJons just isnt what it was when cocoas started surfin the peir with longboarders. But Yes We can make this surf park and its people like you who stop amazing creation to be brought to life! You get enough surfers to work on a surf park with the skills to create it, i would bet my life on it that they would work for free. i have had a few people contact me about this and the more i can get the sonner we can get back to building this amazing surfpark witch will break new grounds in technology. DAMN IT AMERICANS! QUIT BEIN SO DAMN LAZY AND CHEAP! screw the econamy lets do this for us!

@steven Actually, I’m a pretty smart guy. And I’m definitely smart enough to know Festival Bay is NOT the right place for something like this surf pool.

I did not even think about this being used for surf training; the article doesn’t suggest this.

@willie No, I do not surf. I am not a friend of the ocean.

cost are pretty cheap, yet that dose not matter cost could be really cheap depending on who is gonna run it. Please just contact me at my email for a proper up to date answer.

Bummer about the surf park. I’ve been following the idea since 2005. I live on the West Coast, but I was willing to fly out to try the wave in the park. Too bad the credit market dried up and no one is going to be able to get a loan to fund this kind of thing.

@ sebastian … yeah, it’s open, let us know what you think after visiting.

@ jonathen, Lern how to spel, man. ur spelling is as atrosius as, this sentance. A little grammar and spelling go a long way toward credibility!

I live in Peru and had booked for a membership waiting for the project to come through, but after a while of hearing nothing about it, I flew to Orlando with my family for Disney and other things, and I was deeply disappointed to get to Festival Bay Mall and found nothing had happened. As a peruvian surfer, I was hoping this was going to be like Disneyworld to all of us surfers in the world. Believe me, every surfer in the world, which are millions, would have died to ride the expected 6 foot tubular wave they offered. I really hope that one day soon this project will give birth. That´s a feeling that only us surfers can feel.

I heard through the grape vine that some investors were going to build a wave pool at the old Amway Arena site in downtown Orlando. The site would include a high rise resort and a large wave pool that can create good riding waves. My guess is better than Typhoon Lagoon. They want to create a beach scene around the pool. Bars, restaurants, etc.

As a south beach surfer I am very dissapointed about this project not to be finished.We need waves and I am talking about thousends and perhaps millions of surfers waiting for waves in florida.I am shure this park would be packed and paid by itself.

WAVEPARKS LLC is determined to make this happen. Please visit http://www.waveparks.us to see how you can be a part of the project. As one person stated, if we all get together we can make it happen. Lets get wet!

Hola…………… I am 54 NOW……… and ckng this story many yrs ago. Yes , dreaming too much on this subject… but I am getting old can’t believe “stil a proyect “…& not resolved Me , personally & as a long time Surfer… would do anything to help finishing…even come for a week @ the site…& do labor work. Just like Me… there are many outhere …… would come . It’s not just money…. it’s.. ” Creativity ” to solve…… called also..” Bad Management ” My God son lives a few minutes from there…& I will retire to Florida having a Surfpark…& surf my last yrs next to my Family.

Wow! This is an epic fail! 9 million dollars wasted. EPIC FAIL!!!
Should have put a mil as a price for best wave pool design like the s-prize did and ever engineering student from here to Bangladesh would be working on innovative designs. I e-mailed surf parks LLC in about 2005 an asked if this was just a myth. They got mad and told me I was an idiot. 9 mil. Later who’s the idiot? Fail!