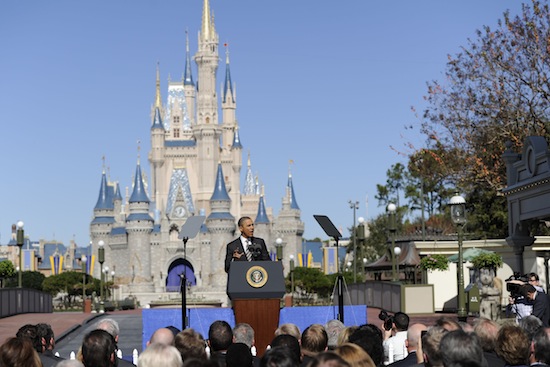 Main Street was closed from park opening until the President left in the afternoon. A bypass was set up backstage for guests to get to other areas of the park. The bypass was lined with parade floats and entertaining cast members, allowing guests some unique photo opportunities.

Regular park guests couldn’t see the President in person, but a simulcast of his speech was set up in the Hall of Presidents attraction.

President Obama isn’t the only president to visit Walt Disney World, most sitting presidents have since it opened. Here’s a video showing past presidential visits:

Presidential visits to Walt Disney World through the years

Guests can see President Obama and all the past presidents at the Magic Kingdom every day, in animatronic form at the Hall of Presidents. Here’s an older video showing President Obama recording his speech for the attraction.

Here’s a video of the attraction itself:

The National Museum of American History wants your...