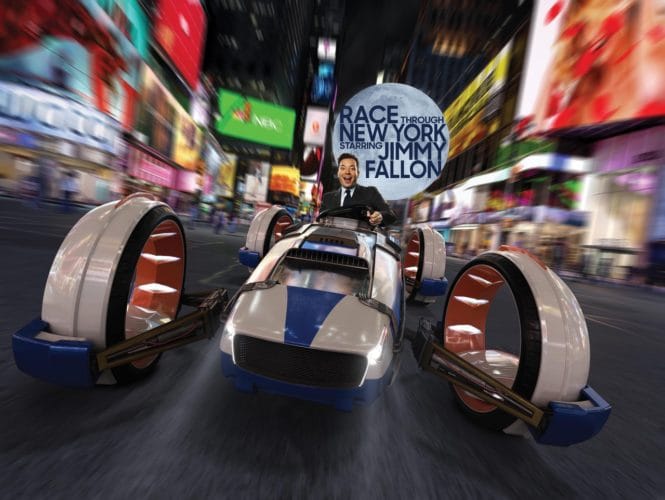 The 3-D simulator ride, which replaces the former Twister attraction, will give guests the ultimate “Tonight Show” experience as they get up close and personal with the show’s most hilarious segments before taking off on a wild and action-packed race through New York City against Jimmy Fallon himself.

To celebrate the attraction’s Grand Opening, “The Tonight Show Starring Jimmy Fallon” will take the show on the road with tapings from Universal Orlando Resort from April 3 through 6. Additional details on celebrity guests and how to become a part of the show audience will be released over time.

As they experience the attraction, guests will make their way through Studio 6B to board the world’s first-ever flying theater, which seats up to 72 audience members, for the race of a lifetime. They will speed through the streets of New York City and all the way to the moon and back, encountering iconic landmarks from the Statue of Liberty to the Empire State Building to everything in between. Your race course includes New York’s sights, sounds, and even smells, such as New York City pizza.

Watch Jimmy Fallon announcing the opening date on his show below:

When Race Through New York Starring Jimmy Fallon opens, it will be the first attraction at Universal Studios Florida to feature an all-new Virtual Line experience, allowing guests to spend less time waiting in line and more time discovering even more incredible thrills throughout Universal Studios. The Virtual Line system is accessible via the Official Universal Orlando Resort App or at kiosks located outside the attraction entrance.

Visit the Universal Orlando Blog for more on Race Through New York Starring Jimmy Fallon. Then watch the following videos for a final farewell to Twister, followed by a recent look at construction on the Jimmy Fallon attraction: