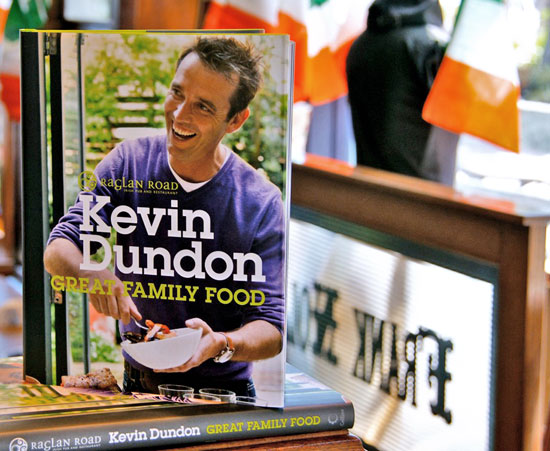 The book is split up into seven categories: one-pot wonders, quick & easy suppers, roasts & family meals, leftovers, accompaniments, and desserts. While the recipes are based on Dundon’s Irish background, you won’t find only meat and potatoes here. Instead, Dundon offers a variety of  familiar meals with new and often bold flavors.

On Tuesday night, the night before St. Patrick’s Day, I had a chance to sample a few of the dishes included in the book as well as some offered by Raglan Road. Chef Dundon was on hand to cook the meals, ensuring they were prepared in the best and most accurate way possible. 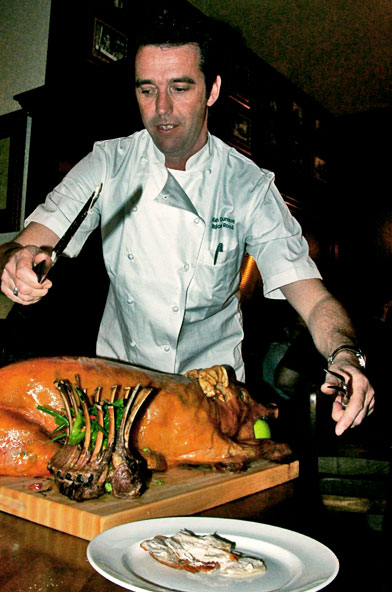 Two main dishes were offered that night: Crown of Lamb & Roasted Root Vegetables and Suckling Pig, both directly out of “Great Family Food.” The book describes the Crown of Lamb as “two racks tied together in a circular shape,” which is exactly how it came out of the kitchen. The recipe, which calls for very little preparation and just 45-60 minutes of cooking time, couldn’t be any easier. I’ve always been a fan of a good rack of lamb but have never tried to prepare it at home as I wasn’t sure how. I will definitely give Chef Dundon’s recipe a shot.

The roasted root vegetables, consisting of parsnips, carrots, and turnips, were full of unique flavors provided by the fresh herbs they are cooked in. They take roughly the same amount of time as the lamb to cook, so they are an easy compliment. But the better side dish for me were the classic roast potatoes that were also served alongside the lamb. They are simply large slices of potato, boiled and cooked in sunflower oil or goose fat. Think oven-roasted potato meets crispy, salty french fry. I had a second helping.

The highlight of the night was a dish that, while the recipe is in the cookbook, I don’t think I’ll be attemping it at home any time soon. Chef Dundon rolled out an entire roasted suckling pig, complete with an apple in its mouth – green, of course. Now, as I grew up in Miami, I’ve had a number of roast pigs in my life, mostly prepared with Cuban flavors. As much as I’ve always enjoyed those, the pig prepared on Tuesday night was the juciest and most flavorful I’ve ever had.

The recipe calls for a whole suckling pig, around 16 pounds. While it says that pigs under 20lb will fit “comfortably” into a standard oven, I wouldn’t even know where to acquire such a pig near my house. In addition, the recipe also calls for the pig to be barbecued after roasting in the oven and I’m sure my home grill isn’t up to the task. But if I somehow managed to have all the necessary equipment and ingredients, I would only hope that following Chef Dundon’s recipe resulted in the same deliciously crispy skin and moist meat.

Following the main course, dessert was served in the form of sherry trifle (another recipe from the book), which consists of raspberries, strawberries, black currants, sherry, and whipped cream mixed with jam Swiss rolls and egg custard. It was quickly devoured by all in attendance and, in combination with a small glass of mead, made for a perfect ending to a fabulous meal.

In the United States, “Great Family Food” is available for $30 exclusively at the two Raglan Road locations, located at Downtown Disney here in Orlando as well as in Kansas City. It is, however, also for sale via Amazon UK. For our Irish readers, it can be found in all book stores throughout Ireland, including Easons.

So if you didn’t get enough Irish food and fun on St. Patrick’s Day, head to Raglan Road, have some shepherd’s pie (which I also sampled on Tuesday – it was excellent), enjoy some Irish music and dancing, and pick up a copy of Chef Kevin Dundon’s new book. 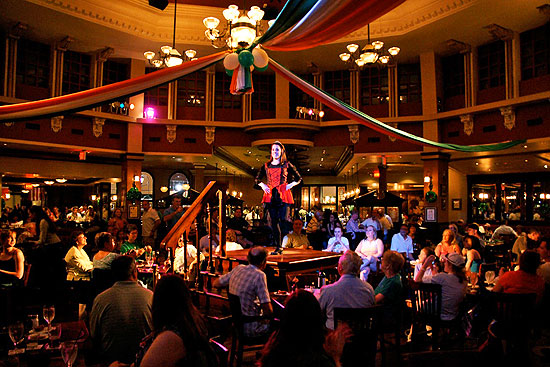 Cat and Mouse to join together for new Boardwalk restaurant

Lunchables’ ‘Lunchabuilds’ want you to play with...