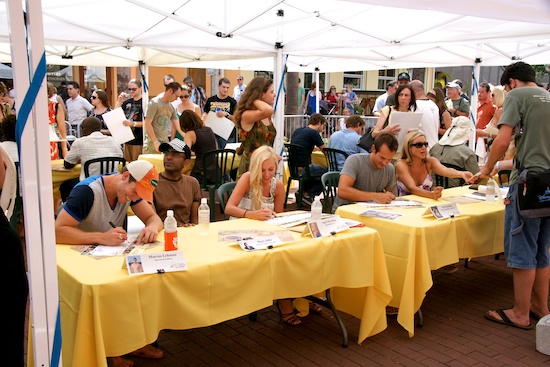 For the fifth consecutive year, reality television stars will help make dreams come true by appearing in the Hearts of Reality event Aug. 3 in Celebration, Fla.

More than 140 of the stars from the hit television shows “Survivor,” “The Amazing Race,” “The Apprentice,” “Big Brother” and more, will reunite with their cast mates and use their celebrity to help raise donations for Central Florida’s Give Kids The World Village.

Reality star enthusiasts are invited to mingle and party with their favorite stars at a “Land Lovers Luau” at 10 p.m. at the Celebration Town Tavern in exchange for a $30 donation to Give Kids The World. For $20, guests can attend an autograph signing from 3 to 6 p.m. at the Bohemian Hotel.

In addition to the funds collected during the weekend, the stars also will personally raise money by posting on their social media sites and asking fans, friends and family to contribute to the cause, which will accept donations from now until the official close of the fundraiser on Nov. 11.

Give Kids The World’s own stars, the wish children and their families, will also have the chance to meet the celebrities during a special visit to the Village. The reality stars will tour the 70-acre Village and then help host the charity’s weekly Pirates & Princesses party. At last year’s party, dressed in costume with tiaras and toy swords, the television stars reversed roles with the children by asking for autographs from the young, true-life heroes.

“We are delighted that the Hearts of Reality television stars will once again share their time and talents with our precious guests,” GKTW President Pamela Landwirth said. “Their participation helps bring awareness to our mission of creating the happiness that inspires hope for children battling a life-threatening illness.”

Here’s a look at the autograph signing in downtown Celebration in 2009:

For more information and a list of more reality stars appearing, visit celebrationtowncenter.com.

To support your favorite reality star with a donation to Give Kids The World, Click Here.

Out of the Loop: New England SkyScreamer...

Celebrate the 75th anniversary of ‘Bambi’ with...