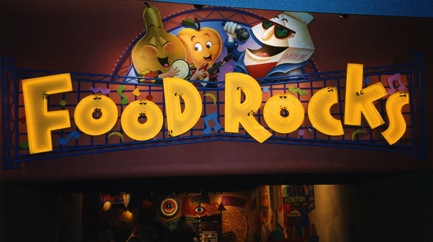 Before the majestic hang-gliding sensory rich experience of Soarin’ in The Land at Epcot, in the very same space was a musical animatronic stage show called Food Rocks. From 1994 to 2004, it baffled and delighted audiences of parents and children, in precisely that order. Because like the sassy uncle at your family holiday gathering, Food Rocks was entirely pun-based.

Puns are typically hilarious to children, who are usually hearing them for the first time. (I would know, because my husband and I are the sassy aunt and uncle using bad puns at family gatherings to make our nieces and nephews laugh.) But they are eye-rolling to adults who have heard them time and time again. It’s sort of like linguistic evolution. In the early years of learning your way around the English language, puns are helpful and humorous. But when you no longer need them anymore, they irk you. Unless you’re one of the Marx Brothers, and if you are, I’d like to meet you and learn your tricks of longevity. 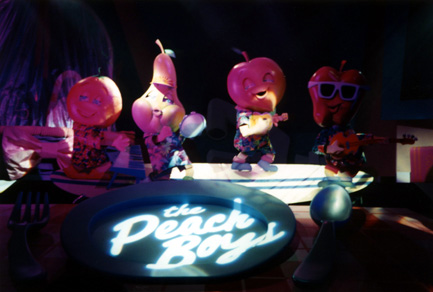 The adult politics of puns leave me with a certain gratefulness that Food Rocks was active during my childhood. When I was too young to be cynical and just the right age to understand the message, I found the show absolutely hilarious, and my cousins and I took the attraction in as though it were a real rock concert. The experience of having anthropomorphized cartoon food singing to me about how many servings of fruit I should have and why I need plenty of protein still seemed cool to me. The ever-present props of live music, the scent of fog machines and the feel of bass-thumping music pumping through speakers became inextricably tied to the concert experience for the first time in our little brains. Maybe that’s why I got so hungry for produce at the Huey Lewis concert earlier this summer. 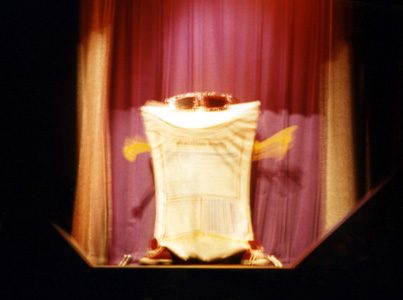 I also remember the show that Food Rocks replaced, Kitchen Kabaret, which had a similar concept but no contemporary music. Whereas Food Rocks was a time capsule of contemporary pop hits. It featured the songs of Cher, Peter Gabriel, Sting and more as well as being emceed by Tone Loc, who played the part of Fud (pronounced “food”) Wrapper in the show and sent the message to kids that they, “gotta read the wrapper”.

Food Rocks was one of the least subtle examples of what Disney is so often trying to do with its theme parks, educate. Think about The Seas with Nemo and Friends, the Hall of Presidents, or even The Great Movie Ride. All of Disney’s attractions are entertaining, but so many of them are also sneaky education, like a living episode of Reading Rainbow, guiding you through facts, history and even conservational awareness.

Though doubtlessly, someone will argue with me about the Hall of Presidents being entertaining. Last August when my husband and I were at Disney World with some friends, we overheard a hilarious exchange between a random husband and wife just in front of the theater where this educational animatronic show plays. The wife, looking bushed and frazzled was pushing a stroller through Liberty Square at a brisk pace, probably trying to make little Bobby or Janie’s favorite ride in Fantasyland one more time before leaving the park. The husband stopped in front of the Hall of Presidents and looked at it longingly, pointing in a way that looked as though he was trying to be convincing with a face that said, “Eh, eh, how about now?” To which the wife turned around sensing his absence and without skipping a beat replied, “Come on Frank, you know I’m not going in there,” to the soundtrack of the squeaky wheeled stroller pushing onward again, playing the death knell to poor Frank’s hopes of looking upon the faces of our nation’s robotic fathers.

I don’t think the Hall of Presidents will ever close. If anything, futurist and novelist Cory Doctorow supposed in his book, “Down and Out in the Magic Kingdom”, someday far in the future, the experiences of each president will be flash-baked into our brains, filling us with their sensory experiences in a way that an animatronic show could never dream to do. But whatever happens, it won’t go away. It’s a classic.

And speaking of baked, why didn’t Food Rocks last?

Well, for one thing, it wasn’t built to. If it were still around, we might laugh at its best-of-the early ’90s playlist. Though if you ask me, Peter Gabriel is timeless. For another thing, the whimsical design of the show was also indicative of the era that it was from. Not that I don’t love a cartoon fish that resembles Cher, but … more than anything else, perhaps it was too blatantly educational. Maybe that’s part of what made it so (food pun in 3…2…1) cheesy for so many parents.

Take the soon to be closed for renovations Star Tours for example. I rode Star Tours multiple times back when it was brand new, and the technology of it blew me away. It was the cutting edge in the theme park industry. When I took my husband to Disney World for the first time in 2007, we rode the ride and seeing as how we’re both big Star Wars geeks, he loved it. But having no attachments to the ride from childhood, he found some of the more outdated aesthetics kind of funny. The ’80s hairstyles in the video that played before boarding your shuttle and the all-grey carpet loading bay, among other things. Well, just imagine what Food Rocks would be like to parents who had never experienced the show as kids themselves or children who weren’t familiar with most of the music? 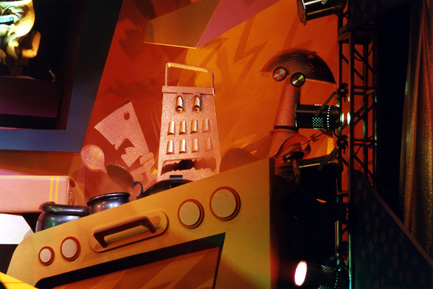 No matter what most people think of Food Rocks today, it certainly stuck with me. I can’t see someone making an angry face without thinking of the Peter Gabriel bowl of salad singing about, “High Fiber” to the tune of, “Sledgehammer”. It was a colorful show, well-written for its intended audience of children and timely in its conscientious effort to educate children on obesity prevention.

To be honest with you, I’m OK with the fact that the incomparable Soarin’ replaced Food Rocks. Food Rocks was the perfect show for its time and it left exactly when it should’ve. I’m not one of those Disney purists who thinks nothing should ever change. Disney seems to know when the current wave of adults is missing something enough to bring it back, something that will delight children just as much as pleasing nostalgic parents, i.e. the Main Street Electrical Parade.

I loved Food Rocks and I’m glad it’s not around to be underappreciated by people who wouldn’t love the musical references or the tongue-in-cheek jokes or feel that bittersweet nostalgia about it. And unlike the sadness of not being able to actually experience the rides of days gone by via video, YouTube can always provide me with a good pun-laced, nutrition-inspired musical pick-me-up when I need it. And it’s pretty darn close to the feeling of sitting in the audience. Now if you’ll excuse me, I have to go rack up another daily serving of fruit or vegetables.

Special thanks to Jeff Lange of jefflangedvd.com for the photos.

Thanks for sharing this piece of History from EPCOT, this is wonderful as I didn’t know these shows ever existed.

Brilliant analysis of a show that is missed, yet much past it’s prime. Your writing style, combined with the great subject, makes these articles a blast to read. I also loved the Corey Doctorow reference. Keep it up!

I wanna be…. YOUR HIGH FIBER!

I wish I’d just once got to see this awesome show.

This article while informative is highly biased but then again most internet article are.

I am from the 80s and while I have never been to EPCOT because it’s too darn expensive and crowded all the time which I get flustered in crowded rooms I have been to this ride on YouTube.

You can go to the ride here and you don’t need a fast pass! https://www.youtube.com/watch?v=gwQgEjqkZy0

Has anybody noticed besides me that for some reason the internet seems to attract the extreme of the extremes out of people like having a dozen salesman knocking on you’re wanting to sell different things all day long?

At least with the internet you can always click the *back* arrow to make those nasty salesman disappear into oblivion.

Oops. I forgot to put the word ,Door, in there.