Retro Orlando: Remembering The Olive Garden as a destination 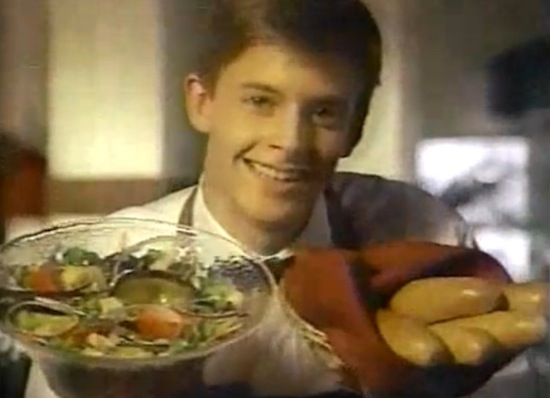 This month’s Retro Orlando isn’t exactly about an attraction. It’s about a restaurant. A restaurant that once held a mythical status similar to that of an attraction, one created and tested in Orlando, and one that surely picked up attributes from the theme park town where its parent company decided to launch their creation. I’m talking about the glory that once was The Olive Garden.

Sure, now it’s kind of a punch line. As the short running show, “Clone High” once put it, “Perhaps The Olive Garden. It’s like eating in the private kitchen of a delightful Italian stereotype.” Now it’s just another in a slew of what feels like a billion chain restaurants. But once upon a time, it had an exotic appeal that could’ve only been born in the land of a thousand theme parks. I had almost completely forgotten about this connection until I came across a little stuffed animal of a fish, bought for me as a child by my parents in Orlando. It changes color when you put it in cold water (a trend in ‘80s toys) and I remembered soaking it in a fountain while waiting to be seated at the The Olive Garden in Orlando sometime in the early ‘80s. Back then it was another attraction to mark off our list. It’s hard to think of a time when this restaurant was a tourist draw, but I’m telling you, it was.

After all, Orlando is the perfect test town. Its tourist-friendly status ensures at any point in time, an eclectic mix of visitors reaching across all different demographics will be in town, thus making it an ideal spot to test the waters for any new business. In December of 1982, the now ubiquitous chain of Italian eateries opened with a financial bang, (under the name “The Green Frog” initially) a near instant success with diners. The critical response was more like a whimper, but chain restaurants don’t really need critical success. They need the approval of the masses and The Olive Garden had it.

The place was once a stop-off for my family, a must-see during a summer vacation, something to catch after swinging by the empty parking lot at Gatorland. (Without the Internet, it was sometimes hard to catch the things you wanted to do.) Something almost as exciting as the theme parks we came to visit.

When we got home to our small Indiana town, we didn’t just tell people about the belly dancers at Busch Gardens and the Main Street Electrical parade at the Magic Kingdom, we also told them about the fancy new Italian restaurant where we went to eat a meal. A meal with never-ending breadsticks, something that my parents appreciated with four daughters in tow, three of whom were teenagers at the time.

If you grew up in the ‘80s, you may remember this buzz. The commercials were aimed squarely at your mother and had a sheen that you might find in most jewelry commercials. Most chain restaurants up to the early ‘80s were fast food, so the idea of something like an upper-class “authentic” Italian restaurant coming to a town near you seemed exciting – almost too good to be true, but that’s what we heard was happening not long after a trip to the location in Orlando. Soon we had one in Indianapolis, and anytime we felt nostalgic for Orlando, that’s where we’d go for an afternoon lunch. It wasn’t the first non-fast food chain restaurant, Chi-Chi’s had come along a bit earlier, opening in 1975. But foodtimeline.org has The Olive Garden listed as one of the most popular restaurants of the ‘80s. If you were around back then, you can vouch for that statistic.

When I try to remember a time when The Olive Garden had an exotic appeal, I think back to what it was that people talked about. I wonder if the theming of the restaurant had anything to do with the community of theme parks and tourist attractions surrounding it’s first location. After all, to get any kind of attention in Orlando from tourists, you pretty much have to offer an experience.

After all, even thought the stucco walls of the chain restaurant are meant to evoke cozy Italian villas, they could just as easily be renascent of the stucco walls of the Pirates of the Caribbean exterior in Adventureland or the pink-ish garden walls of Busch Gardens that surround the otter exhibit. The point of the illusion in all of the above is to feel far away, in another place or another time … or at least somewhere time indeterminate. Theming and set design make or break any tourist experience. Back in the early days of The Olive Garden, the lights were kept low, fires were crackling in glass fireplaces nearby, and there was enough green plastic foliage to get lost in.

Years later, as a struggling 19-year-old, when it came time to get a job in order to pay for college, the first place I went was The Olive Garden. I even mentioned in my interview that waiting tables wouldn’t be so bad as long as I could do it somewhere with a Dean Martin soundtrack and the illusion that I was somewhere other than my mid-western hometown. Of course, the nostalgia for my childhood Floridian dining experience wore off rapidly. Before I knew it, it was just another restaurant with dirty plates and cranky customers. But still, it was better than nothing. My own personal way of being close to those life-shaping vacations to Florida.

In his memoir, “The Life and Times of the Thunderbolt Kid”, Bill Bryson remembers an America without chain restaurants. He grew up in Des Moines in the ‘50s, and recalls with gusto how every restaurant and department store was different and unique. Back then, businesses had to have that special something, a novelty that kept customers coming back for more apart from whatever the merchandise was. He recalls diners where the toilets glowed purple and the seat automatically lifted itself and tea rooms where you got to choose a wrapped toy to leave with after every meal. Of course, he also remembers the birth of the TV dinner, with its tinny metallic tasting, perpetually frozen-in-the-middle vegetables. The point is, food and commercialism changes drastically from generation to generation. The Olive Garden isn’t “cool” anymore, or at least, it isn’t what it once was, an “authentic” Italian dining experience meant to whisk you away on a breadstick-induced high.

Now that’s not to put it down, it’s a fine place to have lunch with the in-laws or gorge on salad. I’m not knocking it. Remember, I waited tables there for a year and it wasn’t a bad job. Not at all. But if you look at it through the nostalgia goggles, you’ll remember a time when it was inexorably linked to Orlando and therefore, in many ways, forever linked to theme park culture. Something that was a part of the Florida zeitgeist in the ‘80s for those of us that chose to travel there on an annual vacation.

The difference between the once enchanting idea of The Olive Garden and the evergreen theme park culture, is that you can’t put 700 Walt Disney Worlds all across the country. Part of the magic of theme parks is that there really aren’t that many of them, at least not compared to the number of restaurants scattered across the nation. Part of the charm of theme park culture is that you have to make a trip to get to them, unless you already live in Anaheim or Orlando or Kings Mill or any other location lucky enough to have the tourist draw of roller coasters and dark rides.

It’s funny to look back across the years and remember a time when something like a now run-of-the-mill chain restaurant was all part of the magic surrounding Orlando culture. To see how things change and how what was once awe-inducing as a kid can now be funny or peculiar as an adult. Last but not least, to hold these random bits of nostalgia up to the institutions that really seem to stand the test of time in the “magic” or fun categories. Someday when I have children, I’ll be able to tell them how The Olive Garden was once a mysterious and exciting restaurant that generated buzz states away, but you can be sure that I’ll be telling them this on the way to a theme park, where all the enchantment is still intact.

Want to live on Disney World property? Reservations are being accepted for Golden Oak