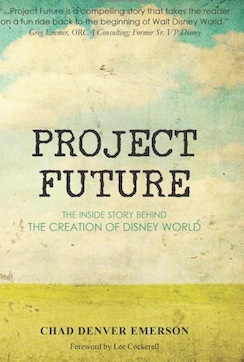 It’s a plot Jack Bauer would love – a clandestine project by one of America’s most brilliant business leaders punctuated with multiple code names, fake identities, make-shift affiliations, and unique regulatory arrangements. And while almost every traveler recognizes Walt Disney World as one of the world’s most popular tourist destinations, what might surprise them are the secret and pain-staking measures Walt took to keep his intentions for a Disneyland-East under wraps.

Project Future explores one of the most comprehensive and successful private developments in U.S. history – the Walt Disney World Resort.

The paperback by Orlando Attractions Magazine contributor Chad Emerson takes Disney fans and theme park enthusiasts on the ride with Walt and his advisors in the early ‘60s as they evaluate locations like St. Louis, Niagara, Monterey, Calif., Ocala, Fla. and the Miami area as possible sites for the new “Disneyland-East.”

Author Emerson, a tenured member of the faculty at Faulkner University’s Jones School of Law and highly-respected theme park and attractions industry expert, puts readers in Conference Room 2E at the company’s Burbank headquarters as the most senior Disney officials sort through the optimal parcels of land to place the “real working city” and planned entertainment development.

Emerson spent more than two years researching the history of Walt Disney’s Florida project while interviewing a variety of key players such as Harrison “Buzz” Price, Robert Price Foster, Gov. Claude Kirk, and Tom DeWolf. What was at first a law review article, then a proposed story in Orlando Attractions Magazine turned into a 189-page book that serves up glimpses of historic detail and spy-like maneuvers the Walt Disney Company deployed to fashion more than 27,000 acres of Florida marsh, swamp and farmland into the world’s most successful destination.

Project Future is published by Ayefour Publishing at a list price of $14.95. The book is available on Amazon.com by Clicking Here

Retro Orlando: Remembering The Olive Garden as a destination

When my pay-check comes in mail at the end of this month I can tell you that the first thing I’m buying is this book!

I bought this book after hearing the author on some podcasts. Unfortunately, the stories he told on the podcast were far more interesting to listen to than to read.

I thought the book was okay but only okay. I kind of thought RealityLand was a better picture into the process of creating Disney World, but suspect the best book hasn’t yet been written.