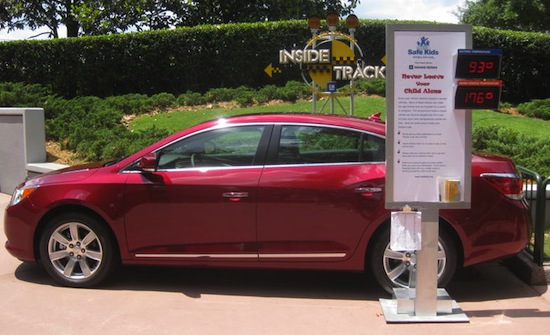 Safe Kids Worldwide recently hosted a one-day event at Epcot’s Test Track pavilion. The purpose of the event was to bring awareness of child endangerment when left inside a hot vehicle. Wes Bender, an operations manager with Safe Kids, explained that the mission of Safe Kids is to bring child safety to the forefront of parent’s minds. They have been working for years to educate by giving away free child safety seats and performing check-ups on existing safety seats to make sure they meet acceptable standards. Their organization educates in other areas including bicycle, sports and home and health safety as well. 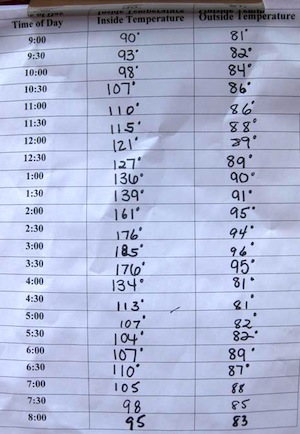 Wes said Safe Kids chose Epcot to present their informative display because of their key strategic alliance with General Motors. He said most parents aren’t aware just how hot it can become inside an enclosed vehicle in a short amount of time. On the day of the event, a test car sitting in the sun outside of Test Track showed the outside temperature was 93 degrees but the temperature inside the vehicle was 176!

Wes further stated that on average, 37 children die each year in the United States from hyperthermia, or overheating, inside a vehicle. Those are just the ones that are reported correctly. He said there have been nine fatalities already this year. “Many parents think that they will just leave the child in the car for a moment or two and they will be ok,” said Wes. “The parent isn’t aware just how fast it can reach dangerous heat levels in a car.”

The National Highway Traffic Safety Administration (NHTSA) is a partner in this effort. They issued a Consumer Advisory in which Transportation Secretary Ray LaHood reminded motorists to never leave young children alone in vehicles – even for a minute. Citing statistics from NHTSA’s Not in Traffic Surveillance (NiTS), which is a virtual data collection system, he reiterated that hot weather and children alone in cars is a deadly mix and results in the leading cause of non-traffic deaths to children.

Wes said children are more at risk for hyperthermia in cars due to a few factors: they are unable to escape from the car seat and car, their bodies don’t dissipate heat as well as adults and their developing brains are more susceptible to heat that than that of a full-grown adult. In just a few minutes alone in a hot car, a child can succumb to heat stroke and even death. He also warned not to leave a child alone in the car with the air conditioning running. The car can stall, cutting off the necessary cooling; or a criminal can easily steal your automobile, taking your precious little one as well.

When asked what you should do if you see a child alone in a auto, Wes said, “First call 911, because you have no idea how long that child has already been in the car already. Second, I would encourage them to try to open the door and save the child’s life.”

Safe Kids Worldwide can be contacted through their website at www.safekids.org.

Not only is this a good example of why not to leave children in a parked vehicle, but it’s a PRIME example of not leaving PETS and animals in locked/parked cars too!

Debbie, that is so true. Wes mentioned that in our discussion, but I failed to mention that in the article. Always err on the side of caution.