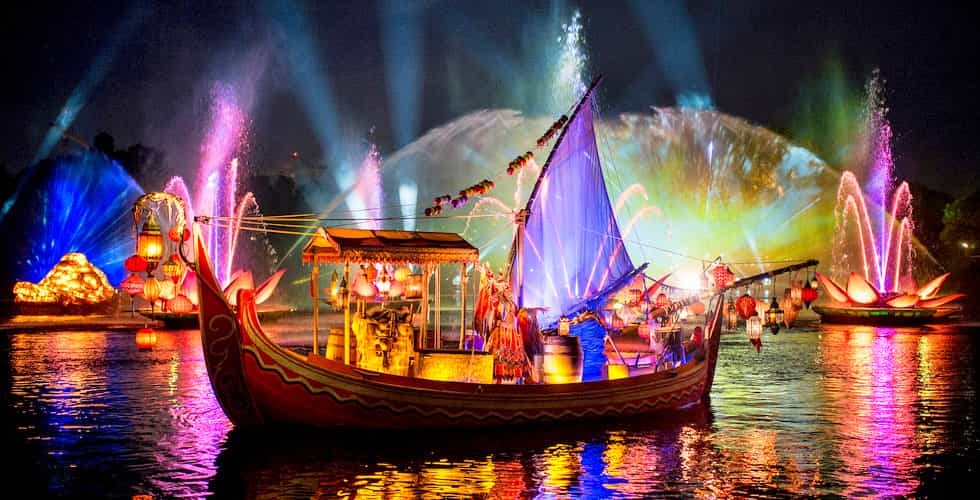 Nearly 10 months after it was originally scheduled to debut, Walt Disney World has finally announced that Rivers of Light officially opens Feb. 17 at Disney’s Animal Kingdom.

Rivers of Light combines live performance, floating set pieces, a soaring musical score, fountains and more in a celebration of animals and nature. The story magically unfolds on the broad natural stage of the Discovery River, conveying the uplifting spirit of an ancient and timeless lantern ceremony and filled with symbolism, storytelling and plenty of heart.

As sunlight fades and the stars begin their twinkle, remember that we are all bound together by earth and spirit — past, present and future. Listen as the Discovery River responds to the whispers of the world, cradling creatures with a symphony that swells with wild murmurs and shimmering secrets of the universe. So begins a new light — a vibrant awakening of flitting fireflies leading to a ceremonious procession across the water.

Before your eyes, clusters of lantern light shift and shape into stunning animal spirit forms—the Tiger, Turtle, Elephant and Owl. Spellbound, you’re transported across Asian jungles and tropical oceans to African savannahs and North American mountains. This magnetic display culminates in a triumphant blend of song, light, color and earthly elements—a grand finale so divine that you can’t help but feel a sense of peace and oneness with nature.

Featuring evocative, never-before-seen footage from Disneynature, live performances and floating set pieces set to a soaring original musical score — this nighttime show employs a host of magical devices to create an immersive experience that’s unique to anything else on the planet.

The flickering ornamentation of fireflies illustrates the migration of light—a central motif of the production. As the story unfolds, original video projections and choreographed laser animation combine to create the appearance of glowing fireflies, illuminating moments of the celebration like living pixie dust. Mysteriously, the show’s “storytellers” never utter a word. Instead, they communicate volumes through fascinating forms of authentic Asian dance, music, song and shadow puppetry.

Dining packages with reserved seating can now be purchased online, starting at $39 for adults ($23 for children).

The show runs on select nights for approximately 15 minutes, check the My Disney Experience mobile app to reserve FastPass+ seating or view the park schedule for showtimes.

Watch this sneak peak at the new Rivers of Light show, recorded during a preview held last year: