The Rumor Queue: Jurassic Park arch comes down as Universal Orlando makes way for their next attraction 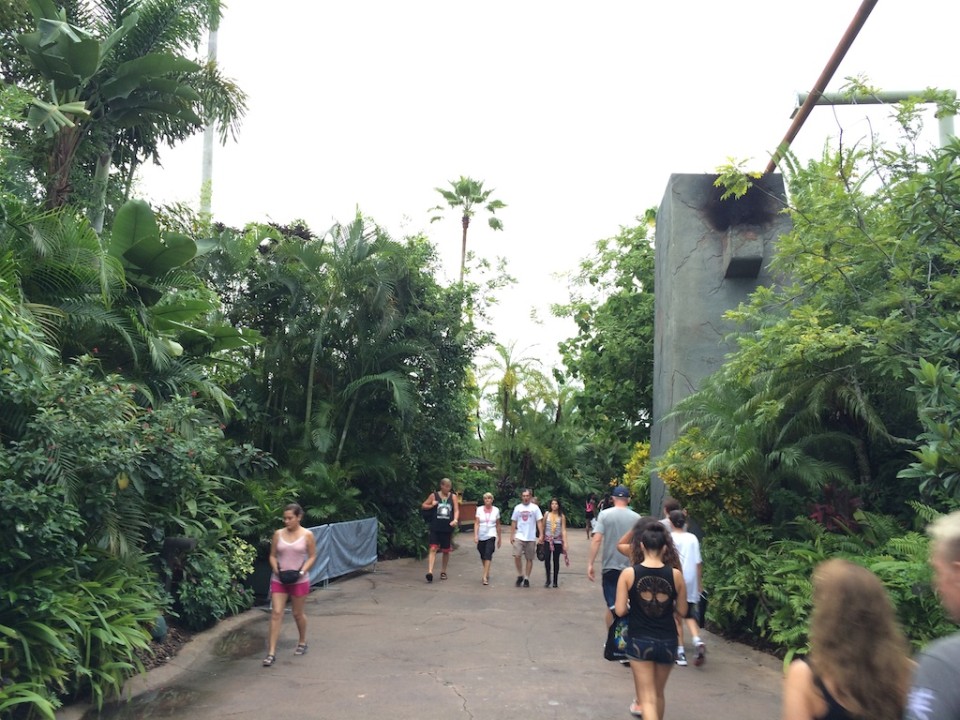 Astute guests might have noticed a recent change in Universal’s Islands of Adventure: the Jurassic Park entry arch closest to Toon Lagoon is being removed. Just behind it, as seen through the trees, is a new large construction site. 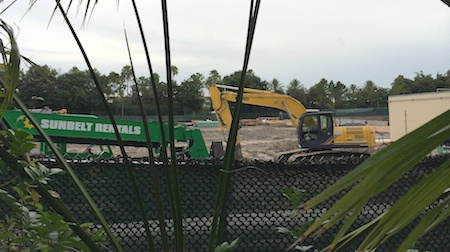 You might speculate that this could be confirmation of the big expansion that’s been rumored for years for Jurassic Park. With the new “Jurassic World” movie on the way, this would make sense. The only issue with this guess is the archway. Why would Universal Creative decide to relocate or remove it if the construction was intended for Jurassic Park? The arch’s new location is said to be close to Thunder Falls restaurant, thus setting new boundaries for the Jurassic Park section of the park. But for what?

Since the Studio Tour at Universal Studios Hollywood was updated with a new and modernized version of King Kong (with the aid of Weta Digital and Peter Jackson), Universal Creative has been supposedly gauging guest interest of a full-fledged land for the iconic movie monster.

Much like Jaws, the former Kongfrontation attraction still garners disappointment amongst guests when they learn of the ride’s removal. Those familiar with Universal’s history may also know of the significance of Kong: it was the first attraction to successfully come together when the resort only existed on paper. 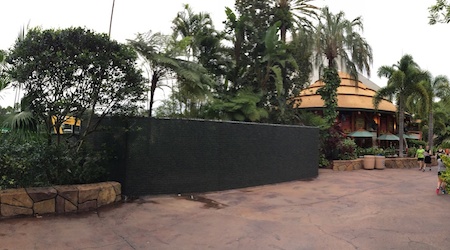 Universal Creative’s affinity for Kong is no secret, and this construction is rumored to be tied directly to the ape’s return. Strong rumors say that between Thunder Falls and Toon Lagoon will rest “Skull Island”.

The expansion is said to consist of one major attraction. Incorporating the technology seen in Universal Hollywood’s tram tour, guests will walk through the vestiges of an ancient temple. From there, they will be ushered onto ride vehicles that are rumored to be heavy duty truck-like vehicles linked together in a tram-like manner.

Rumors suggest guests will be accompanied by a tour guide at the front of the vehicle. The ride will start out as just a “normal” tour of the island, with the guide allaying guest’s fears by showing them a vast wall designed to keep Kong and the island’s beastly inhabitants away.

As they always do, things will go awry and guests will be thrown into several harrowing encounters between Kong and the island’s menagerie of monsters. This will be accomplished with practical effects, ride vehicle movements and large 3D domes. 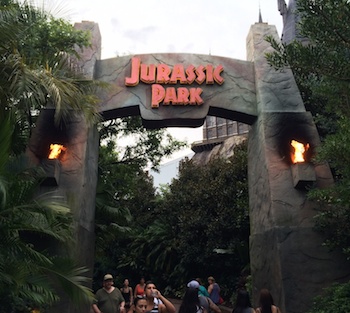 The Jurassic Park entry arch near The Wizarding World of Harry Potter – Hogsmeade.

The first signs of construction came earlier this year when the Jurassic Park T-Rex photo opportunity was relocated. Permits have since been filed for Project 340 and construction walls have been erected around the alleged space for the new land.

With Diagon Alley now open and the thrust of its construction at an end, Universal is rumored to be focusing its efforts on two new projects. One being Skull Island and the other is said to be a major overhaul of Woody Woodpecker’s KidZone, although the former is said to be further along than the latter as of now.

For the foreseeable future, NBC Universal intends to open at least one new attraction at Universal Orlando and Hollywood each year. This declaration came directly from President and CEO of NBC Universal, Steve Burke in an analyst conference held last Fall.

When we reached out to Universal Orlando for word on the Jurassic Park arch removal, we were told, “We’re not commenting on this at this time.” We expect the company to make a formal announcement of what its plans are for this construction site before the year’s end.

Disclaimer: The thoughts expressed here are not purported as fact and should be viewed as rumor until officially confirmed or denied by the companies mentioned.

• Fowl Owlerson, or “Fowly” as he’s affectionately known, has been attending theme parks since he was a spry owlet. When he’s not filtering through the latest murmurings around the industry, he can be seen writing, reading, and snacking on the occasional mouse. Follow him on Twitter @fowlowlerson for the latest rumors or drop an anonymous letter to him at [email protected] if you feel so inclined.

It better not be permanent >:(

Interesting stuff, I always loved Kong on previous visits.
We’re coming back to Florida in November 2015 for our honeymoon. Given the statement that Universal aim to open a new attraction every year, hopefully this new attraction will be up and running when we visit. Since we haven’t been since before the Despicable Me ride opened, that’s lots of new experiences to have!
Looking forward to it 🙂

More Kong? The character is iconic but the movie is not.

I think what they have on the tram is enough of Kong because it displays pretty much the ONLY cool thing about Kong in the movie. Ape vs T-Rex. So considering how precious land is in Universal Hollywood then I’d much rather see something more interesting/relevent claiming the space.

Sad news re the removal of the arch. It’s one of those things in Universal which I really love. It’s so associated with the music for me. Whenever I hear the theme tune on the radio, it takes me back to Universal and gives me a big lift in my day as I think of walking through the arch and how much I enjoy being there in Florida.

There is to much Harry potter, jaws should of stayed and just been updated, so should of kong, back to the future was great so disappointed when the Simpsons went in which isn’t even universal

A look at the best Audio-Animatronics –...