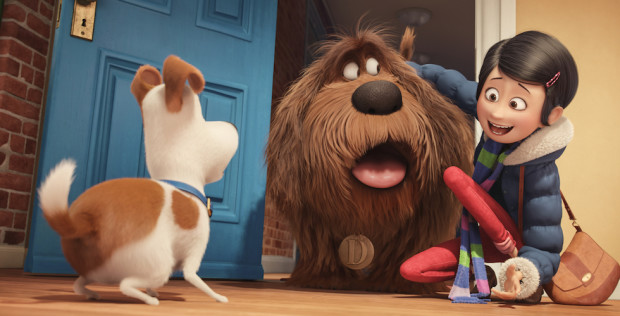 Illumination Entertainment and Universal Pictures present The Secret Life of Pets, an upcoming movie about the lives our pets lead after we leave for work or school each day. Could a ride based on the movie already be in development?

Hello, everyone! I’ve been spending my time unpacking, working through my backlog of books and movies, and “Owl Stuff” that you wouldn’t understand. But my break is over and it’s time get back into the swing of things.

Rumors were sent to me from credible sources about a new attraction for Universal Orlando and Universal Studios Hollywood that was covered in my top rumors of 2016 column. Universal Studios and Illumination Entertainment have been hard at work on what they hope will be the start of a brand new franchise. It circles around the premise “What do your pets do when you aren’t home?” and it’s called “The Secret Life of Pets.” The movie stars an ensemble cast of comedians and actors and is scheduled to hit theaters Summer 2016.

My sources have told me the internal response to the movie has been positive, which got the gears in motion to flesh out a theme park ride for Universal’s theme parks because “Synergy” and such. Illumination’s track record with the Despicable Me franchise instills confidence in the likelihood of this new project’s success.

Based on my sources, the ride queue will center around the New York City apartment complex seen in both trailers, which serves as the home for all of central characters of the movie. Guests will be loaded into vehicles that seat a modest number for a more immersive experience. Per the rumors shared by one of my sources, these vehicles will be trackless with the closest comparison being Mystic Manor’s ride vehicles in Disneyland Hong Kong. According to a source, the goal of Universal Creative is to use these trackless vehicles with a lower capacity in conjunction with an inordinate number of intricate animatronics (seriously, if Universal Creative gets their way, it’ll be a lot) and no screens, which would make theme park enthusiasts happy.

Domes/screens have faced heavy criticism from park-goers, and I can understand why. A practical ride like Jaws wouldn’t happen today. However, rides like Harry Potter and The Forbidden Journey and Harry Potter and Escape from Gringotts are intricate in their own right. The ride layout of Forbidden Journey is staggering as can be glimpsed when the ride stops and the lights of the structure switch on or by being evacuated off of it. I give Universal Creative credit for their ingenuity no matter the technology employed in their work, but a new attraction that would be accomplished with mostly practical effects is exciting to me. So digression aside, what will The Secret Life of Pets ride feature?

My sources have related that the ride will follow the plot of the movie, which you can see a fair amount of in the second trailer (below) released by Universal Pictures. The movie’s protagonist is Max, a Jack Russel Terrier who lives with Katie in a New York City apartment complex with a slew of other animals. All is well until Katie comes home with a mongrel named Duke and things go askew. Max and Duke are lost and the other pets in the terrace set out to rescue them.

Per the rumors shared to me by multiple sources, the ride will begin in Katie’s apartment, move to a courtyard or perhaps a platform outside the apartment. Max and Duke will leave the complex in a circular sequence that is described by one source to be more intense than The Cat in the Hat ride but still family friendly, which will be the point where something goes “wrong” (as something must always go “wrong” in a theme park attraction’s narrative). From there, the ride will make its way through the alley full of vagrant cats (spotted in Trailer #2), then flushed down into the sewers of New York. The ride will take guests through the lair of pets who are outcasts (also spotted in Trailer #2) and through a climax that was not revealed by my sources. Ultimately, Max and Duke are reunited with Katie and we depart on a scene inside the apartment complex with myriad pets celebrating. It’s a happy ending, of course.

A source disclosed that the ride is slated to open in “Mid-to-Late 2017” in Universal Studios Hollywood, and will be located in the former site of Soundstage 28. Demolished in 2014, this former structure was where the Opera House from The Phantom of the Opera (1925) was located.

Another source informed me that a version of the attraction is slated for Universal Orlando Resort, but the location hasn’t been decided upon yet. Previously discussed in my top rumors of 2016 column, two potential locations are Toon Lagoon Amphitheater in Islands of Adventure or Shrek 4-D in Universal Studios. The attraction would thematically work across from Despicable Me, however, Islands of Adventure could use another attraction and the theater in Toon Lagoon has been vacant for a fair while now. Shrek 4D was previously rumored to be on the chopping block for a Star Trek attraction, although I haven’t heard much about this rumor since discussing it in my top rumors of 2015 column. The rumored opening date for the Orlando version of the ride is “mid-to-late 2018.”

My sources have said that barring “The Secret Life of Pets” performing below expectations during its theatrical run, it’s for all intents and purposes a “lock” for Universal Hollywood and Orlando. Given the subject matter, I can see this resonating with movie-goers and park-goers, even if it doesn’t seem to feature an owl as a pet. I’m admittedly biased.