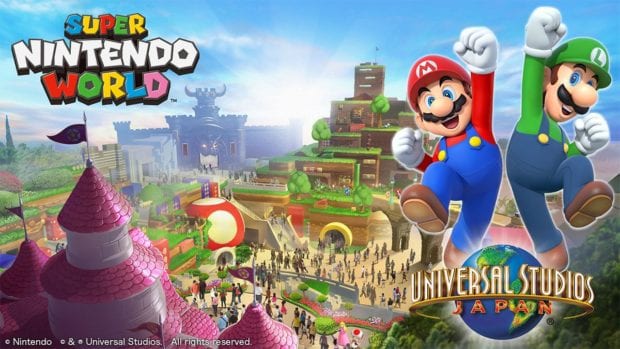 Happy New Year! It’s been a while, hasn’t it? Yours truly, Fowl Owlerson, is still alive and well. It’s time to brush the figurative dust off of online version of The Rumor Queue column and get back into the swing of things.

Universal’s Super Nintendo World
Since I last spoke of Universal and Nintendo’s partnership in May of 2015, it’s been a slow crawl to an official unveiling. The two entities have been collaborating with Shigeru Miyamoto (creator of Mario and The Legend of Zelda, among others) providing input on the project. We know there will be three iterations of Nintendo World and the largest will be Universal Studios Japan, followed by Universal Orlando Resort, and finally Universal Studios Hollywood should be the smallest iteration.

Universal Orlando’s Nintendo World expansion is rumored to replace KidZone and I’ve been told by multiple sources that Fievel’s Playland, Woody Woodpecker’s Nuthouse Coaster, Curious George Goes to Town, A Day in the Park with Barney and Animal Actors on Location will be closed for the expansion. The SpongeBob StorePants venue is rumored to remain, although I’m skeptical of this rumor due to the time that has passed since the store opened in 2012 in addition to the lack of congruity its presence would create (it’s nestled between E.T. and Woody Woodpecker’s KidZone Dining location).

The fate of E.T. is one that could go two ways: the first being the closure of the attraction and the second could be a renovation of the ride and relocation of its entrance and queue near NBCUniversal’s media center in Central Park. Sources I’ve spoken with in the past claimed Universal Orlando was leaning toward closing the attraction for good because the space it resides in is sizable enough for another Nintendo World attraction, as well as the cost of renovating the ride (it’s in need of one).

The Nintendo World expansion in Universal Orlando is rumored to have a recreation of Princess Peach’s castle, which can be glimpsed in the concept art shown thus far. A Mario Kart attraction and a Donkey Kong Mine Cart experience are rumored in addition to a Nintendo store and a dining experience. The space will be akin to what we’ve grown accustomed to with The Wizarding World of Harry Potter and soon Pandora: World of Avatar; an immersive land intricately themed from top-to-bottom.

It would seem the news of this expansion was prematurely announced before Universal and Nintendo had finalized it, which is why it’s been nearly two years since the announcement with no official commencement of construction. That is rumored to change soon. I’ve been told by one source that Universal Orlando is vying to open Nintendo World by 2020 with construction slated to start in 2017.

From what I’ve been told by a source, the space won’t dramatically change for this concept. There will be a pre-show just as there was for ExtraTERRORestrial Alien Encounter and there presently is for Stitch’s Great Escape. Guests will be informed of the ride’s story and introduced to the VR headsets, which will then be placed on each guest in the second room. The story will of course involve central characters from the film such as Ralph, Vanellope, Sergeant Calhoun and Fix-it Felix, Jr. One source disclosed they heard Fix it Felix and Q*bert would be part of the pre-show as animatronics. Another source disclosed that they’ve heard Disney intends on announcing this attraction by this summer.

A Seventh Universal Orlando Hotel and CityWalk on I-Drive
Wet ’n Wild Orlando closed for good on Dec. 31, 2017. With Volcano Bay on the horizon, we won’t be bereft of a Universal water park for long. Rumors claim Universal intends on placing a seventh hotel along with a CityWalk component on the International Drive property, as well as a transit system to connect this space with the rest of the resort.

The Wizarding World of Harry Potter: Phase Three
Diagon Alley (Phase Two of Wizarding World) opened at Universal Orlando in summer of 2014 and we’ve heard talk of a “Phase Three” for a great deal of time. Dragon Challenge and Fear Factor Live are rumored to be on the chopping block.

A source disclosed Dragon Challenge will be demolished and become a experience with two coasters modeled after creatures from the Wizarding World of Harry Potter; the universe as a whole, not just one particular work in it. We’re not privy to where the film series “Fantastic Beasts and Where to Find Them” is headed, but perhaps some of the creatures will be drawn from it? I’ve been told a new locker system (much to the joy of guests and team members) will be worked into a brand new interactive queue. The goal with the attraction would be to let guests interact with the magical beasts of the Wizarding World in a more believable and intimate manner.

The replacement for Fear Factor Live is the perennially rumored Ministry of Magic experience, which I’ve heard conflicting rumors about it either being a walkthrough interactive experience or a ride vehicle driven attraction. I’ve reported on this in the past and it’s rumored to have been something first conceptualized when the Wizarding World was in its nascence.

The final Wizarding World rumor I’ve heard is that Universal Orlando will begin a nighttime Wizarding World projection show on Hogwarts Castle by this summer. Once source disclosed that this is expected to be announced at A Celebration of Harry Potter, January 27-29, 2017.

Like the Guardians attraction at Disney California Adventure, this one would also involve James Gunn and feature new footage and voice work from the cast of the film. I’ve heard we can expect an announcement once Pandora: The World of Avatar wraps construction in Disney’s Animal Kingdom.

Revenge of the Mummy Overhaul at Universal Orlando
Should the release of The Mummy (2017) indeed kick start Universal’s long-troubled Cinematic Monster Universe, I’ve heard rumors that new footage will be shot with the cast and elements from the film will be placed throughout the Revenge of the Mummy ride, although the track layout will remain the same. With this will come an extensive refurbishment of the track and perhaps new trains, or at the very least they’ll be renovated. Should Universal Orlando change its mind, I’ve heard Universal Creative has alternative ride concepts to replace Revenge of the Mummy entirely with a brand new experience.

… And that does it for the annual rumor round-up!

We’ve quite the year in store with more announcements on the horizon in addition to brand new attractions for us to explore. Recent events coupled with matters outside of this column have prevented me from maintaining a consistent schedule. Despite this, two entries of The Rumor Queue topped Attractions Magazine’s most read articles in 2016. I can’t thank all of you enough for the support over the years.

The Rumor Queue will continue and my social media account will remain open for those who wish to contact me about rumors, questions, and whatever else is on their mind. As always, feel free to share your thoughts in the comments section below.

Have a great new year, everyone!

be afraid of the dark i hear Halloween horror nights will feature Dracula, gill man, chuck y, candy man, penny wise the dancing clown, pinhead, the mummy, Norman bates, the strangers, Hannibal, american horror story, ghost face from scream, and a terrifying new icon the lady of death the ancient source of all evil past present and future.

None of the rumors listed here are going to happen! ????

First off, I didn’t write this article, our rumors columnist did. Second, I wouldn’t categorize rumors as lies. The nature of a rumor is that it may or may not be true.

They better not touch Revenge of the Mummy. I’ll whoop their ass if they touch the perfect ride.

So is there any update on the mummy ride? My wife and I personally think it was one of the best rides at universal, if not the best. If one bolt is touched on that ride I’m gonna shove my foot up somebody’s ass

The Rumor Queue: Universal planning on a...