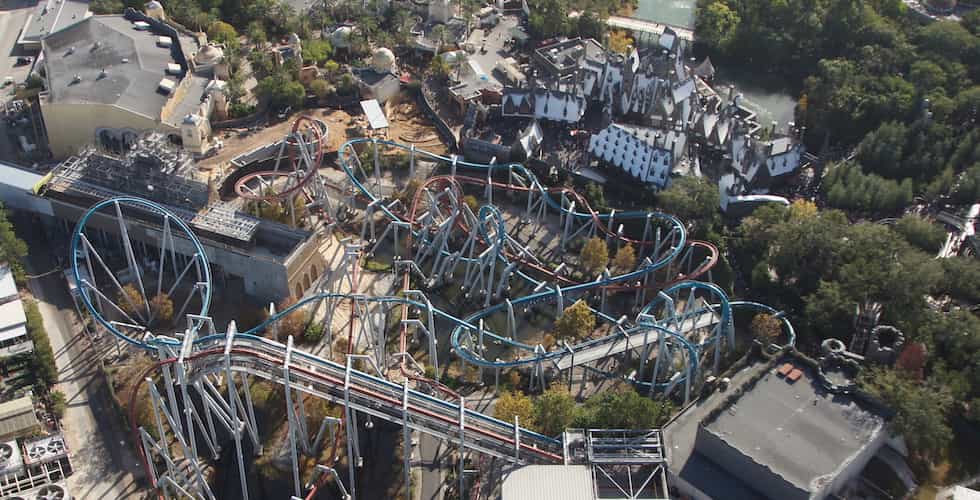 Could Dragon Challenge be on its way out for a new Wizarding World attraction?

Universal’s Islands of Adventure (the resort’s “second gate”) opened to guests on May 28, 1999 with six original islands. The Lost Continent was one of the original six and its current state is a shadow of its former self. The land as it was intended, was modeled after ancient myths and legends. It paid tribute to Medieval, Grecian and Arabian lore — the Medieval section of the land being eschewed for The Wizarding World of Harry Potter.

My favorite attraction of The Lost Continent in its original form was Dueling Dragons. For those unaware, Dueling Dragons was where Dragon Challenge now resides, and the ride was quite different when it opened on May 28, 1999. The concept was straightforward: guests were ushered inside a Medieval castle and caught in a battle between two powerful dragons. The queue took guests through iconic set pieces, such as the “ice room” that displayed knights frozen in place. The wizard, Merlin, portended the inevitable “doom” of guests that culminated in choosing their fate: Fire or Ice. The ride was most noteworthy for being a dueling inverted roller coaster that boasted three “near-collision” moments between the two opposing track vehicles.

Today, the space is very different. The ride’s steel track, originally designed by Bolliger & Mabillard (B&M) remains, but everything around it was retrofitted to fit in The Wizarding World of Harry Potter. The ride’s content was toned down, the wizard Merlin was removed, and frightening elements such as the skulls in the catacombs leading to the track were toned down. The ride re-opened in June, 2010 and continued to duel until the following year when two incidents occurred that forced Universal Orlando to change the ride for good[/URL]. The “dueling” element of the ride was removed by imposing a delay between the launch of the ride vehicles.

Sources have told me that Warner Bros. expressed concerns about Dragon Challenge and Universal Orlando feared litigation. I’ve been informed by various sources since the Wizarding World opened that J.K. Rowling’s contractual agreement with Universal Orlando is stringent and the resort is required to follow a list of terms. For example, employees are not permitted to restock food and beverage items by carrying the large cardboard boxes the items arrive in, but must instead unpack the items into special carts and move them into the land in order to uphold the park’s immersion. There are other terms, but you understand the point: Universal could lose the license if they violate its contract with Rowling and Warner Bros. and so the safety incidents on Dragon Challenge in 2011 forced their hand. Two sources have disclosed that delaying the coaster trains put Universal Orlando in violation of their agreement with B&M, as they designed the coaster trains to be run in tandem, not separately. Finally, the ride takes up a large parcel of land. This isn’t as apparent from the entrance, but walking through the queue, having an overhead view of the space from the ride’s track, and looking at Dragon Challenge from its outside perimeters puts this into perspective.

All of these factors precipitate the inevitable closure of Dragon Challenge for a new Wizarding World experience. The rumors circulating around the Internet say it’ll be based on Warner Bros.’ new five-film expansion of the Wizarding World called “Fantastic Beasts.” I’ve heard varying things about the source of material for this new concept and am admittedly skeptical.

From what I’ve been told by sources, Universal Orlando will be basing this new ride off magical creatures in the Wizarding World, not specifically any story from the “Fantastic Beasts” films. This new series isn’t set in stone so things are subject to change. Dragon Challenge, however, is in Hogsmeade, a village just outside of Hogwarts during the timeline of the books, and that’s not something that can be changed. Adapting the first film “Fantastic Beasts and Where to Find Them” is off the table since it takes place in New York City in 1926. The series serves as a prequel to the events of Harry Potter and according to J.K. Rowling, it’ll be a total of five films that take place over the course of 19 years, which places the conclusion of the story in 1945. Based on rumors and what’s been revealed, I suspect this new concept will be original material inspired by “Fantastic Beasts” that will independently function to fit into the constraints of the park.

The Orlando Business Journal first reported on two patents filed by Universal which may be incorporated into this rumored concept. They’re called “vehicle transportation room system and method” and “system and method for a moving puzzle theater.” The patents show a walled off system that would hide the innards of the ride’s launch system from guests and allow for seamless methods for Universal Orlando to present story elements to guests while transitioning the ride vehicles. The Orlando Business Journal speculates this is for the “Floo Network” teleportation in the Wizarding World, and perhaps that’s true. It’d give Universal Creative more latitude with the location of the ride, but not with time as the only device that allows one to travel in time in the Wizarding World is a “Time-Turner,” and they’re outlawed and rare. So perhaps the ride’s story won’t take place at Hogsmeade but instead transport guests from and back with the “Floo Network” element during the timeline of the books.

I’ve been told by a source that Universal Orlando’s rumored plan is to remove the coaster track, demolish the queue, and completely rework the space. This includes a new entrance, new queue, new locker system and an overhaul of the land itself. I’ve heard Universal Orlando aims to create the magical creatures using animatronics, although projectors will be used to an extent. Demolishing Dragon Challenge and building a brand new building and ride system is going to require a great deal of time and money. So this rumored attraction, if it’s indeed going to happen, won’t materialize by my estimate until 2020 or later.

That’s quite far away! What will sate your yearning for more Wizarding World in the meantime? An Orlando rendition of the recently announced Universal Studios Japan Wizarding World nighttime show is rumored to be announced this year. If it does make its way over to Universal Orlando Resort, it’ll likely be in Islands of Adventure and utilize the Hogwarts castle with projections and sounds, not unlike Walt Disney World has used Cinderella Castle at Magic Kingdom for nighttime shows.

That sounds exciting, but what about the Universal Studios side of the Wizarding World? The long-rumored Ministry of Magic experience is said to be replacing Fear Factor Live. The experience will incorporate the wand IR technology with enhancements and allow guests to take part in a show in small groups with an actor guiding the way. The rumored goal is to create an intimate and immersive experience that will feel like a natural advancement of the show experience of Ollivanders.

This all sounds great to park-goers on the East Coast but what about those on the West Coast? Not to worry. Universal Studios Hollywood is rumored to be getting a Wizarding World expansion. I’ve been told by numerous sources that the Hogwarts Express and Diagon Alley along with a version of Harry Potter and the Escape From Gringotts will be part of this rumored park expansion. Another source related that the nighttime show announced for Japan and rumored for Orlando might eventually make its way over to Hollywood.

NBCUniversal won’t allow the Wizarding World to grow stagnant. Expansions for all renditions of the lands are rumored to be in the works and I expect we’ll learn more in due time. For now, let’s enjoy this new film expansion of the Wizarding World canon with “Fantastic Beasts” and let Universal Creative continue working its magic until they’re ready. It’ll be worth the wait.

‘The Music of Pixar Live!’ to debut at Disney’s Hollywood Studios this summer

Fabulous I cannot do the rides due to illness and would love to see a ‘softer’ ride that anyone could go on PLEASE. I love Harry Potter even though I am getting on in years. Love what you have done in Orlando so far well done. Thank you