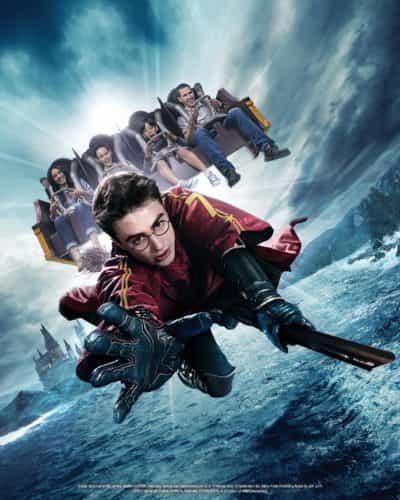 Hollywood’s Harry Potter and the Forbidden Journey is now projected at 120 frames-per-second.

One of the world’s most spectacular theme park rides just got a little more dazzling, as Universal Studios Hollywood has announced the upgrade of their Harry Potter and the Forbidden Journey attraction with 120 frames-per-second projections.

When Universal Studios Hollywood debuted the west coast Wizarding World of Harry Potter last year, its version of the signature Harry Potter and the Forbidden Journey dark ride was the first in the United States to feature 3D video projections in the attraction’s simulator-style dome segments. After a mixed reception from the critics and public, Hollywood quietly removed the 3D element of the ride several months ago, and have now announced that the flat 4K imagery is now being displayed at 120 frames-per-second.

By doubling the frame rate from its initial 60 f.p.s. presentation, Universal claims that the ride now offers “superior clarity and remarkably sharper images than previously shown, with imagery that is stunningly ultra-realistic,” and that the new footage hepls “create a seamless integration between the ride’s elaborate sets and its spellbinding media.” The upgrade does not affect the ride’s sets or storyline.

While no similar upgrade has been announced yet of the original Forbidden Journey in Universal Orlando’s Islands of Adventure, that version’s video projections have become noticeably sharper and brighter recently. If you still want to experience Forbidden Journey while wearing goggles, you’ll have to travel to Osaka, where Universal Studios Japan still offers the 4K 3D version of Forbidden Journey that it premiered.

‘Harry Potter and the Cursed Child –...